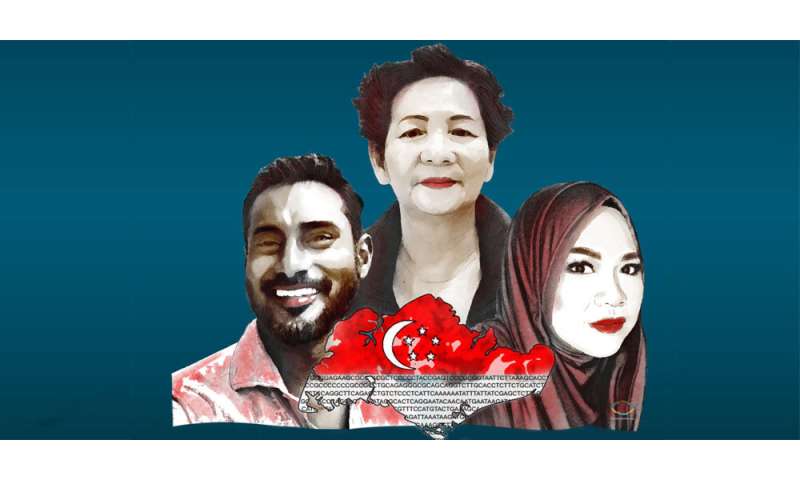 A new genetic databank has been established containing the completed whole-genome sequencing (WGS) data of close to 5,000 Singaporeans. Worldwide, WGS is increasingly used in research and healthcare to identify genetic variations using cutting-edge technologies that allow large numbers of individuals to be sequenced rapidly—This new study is the world’s largest WGS analysis of Asian populations, particularly of Indian and Malay populations in the world, and provides valuable insights on the unique genetic diversity of Asian populations that could enable more accurate diagnosis of genetic diseases, empower the research of chronic diseases and guide prevention and targeted therapies. The study was published in Cell on 17 October 2019.

Genetic variation is known to contribute to an individual’s susceptibility to disease and response to treatments. Populations from different parts of the world show significant genetic diversity that is a consequence of their population histories. Asian populations are not extensively studied and their genetic make-up is poorly understood. These have hindered efforts to discover disease-associated genes that impact on the health of individuals from these populations.

Singapore provides an excellent representation of Asia. It consists of three major ethnic groups (Chinese, Malay, and Indian), which capture 80 percent of Asia’s diversity. Hence, Singapore investigators performed WGS on close to 5,000 Singaporeans (2,780 Chinese, 903 Malays, and 1,127 Indians) over two years to establish a genetic reference on the local population for subsequent studies.

The study revealed a noticeable degree of genetic intermingling among the three ethnic groups, of which Chinese and Malays are more closely related. It suggests that Malays split from Chinese about 24,800 years ago and experienced significant gene inflow with East Asians about 1,700 years ago, coinciding with the Austronesian expansion, a hypothesized historical migration of peoples from Taiwan/East Asia to Southeast Asia and further to remote Pacific and Oceania islands.

In addition, the team identified 98.3 million genetic variants across the Singapore genomes. Of these more than half have not been previously reported in public databases, which to date have focused on Western and European populations. It also identified 20 candidate loci for natural selection where genome sequences were altered as a result of survival and adaptation to local environments during human evolution. 14 loci were found to be associated with human traits and diseases. This may explain why certain diseases and human traits, such as ALDH2 deficiency (Asian Flush), are more or less common in Asians. These results show the relevance and utility of performing genetic studies across diverse populations in Asia.

Professor Liu Jianjun, Deputy Executive Director at GIS and Professor at Yong Loo Lin School of Medicine, National University of Singapore, said, “The study provides comprehensive genetic information and resources on both local Singapore and Asian populations. This will empower research that will help us understand the inherited basis of diseases in Asian populations, that could result in the development of new treatments and ways to predict and diagnose diseases.”

Professor Tai E Shyong, Professor at Yong Loo Lin School of Medicine and Saw Swee Hock School of Public Health, National University of Singapore, as well as Senior Consultant at the Division of Endocrinology, University Medicine Cluster, and Lead of the Metabolic Disease Summit Research Programme at the National University Health System, said, “The history of Singapore, and its peoples, has created a rich multi-ethnic population and unique opportunities to carry out research to improve health. These novel variants present a unique opportunity to make observations that cannot be made in other populations, where these variants are not present. In turn, these observations allow us to develop new ways to predict diseases, and, potentially, identify new ways to treat or prevent them.” Professor Tai has also conducted numerous genetic association studies to better understand the cause of type 2 diabetes, obesity, hypertension and high cholesterol.

How to stay safe while running during a heatwave