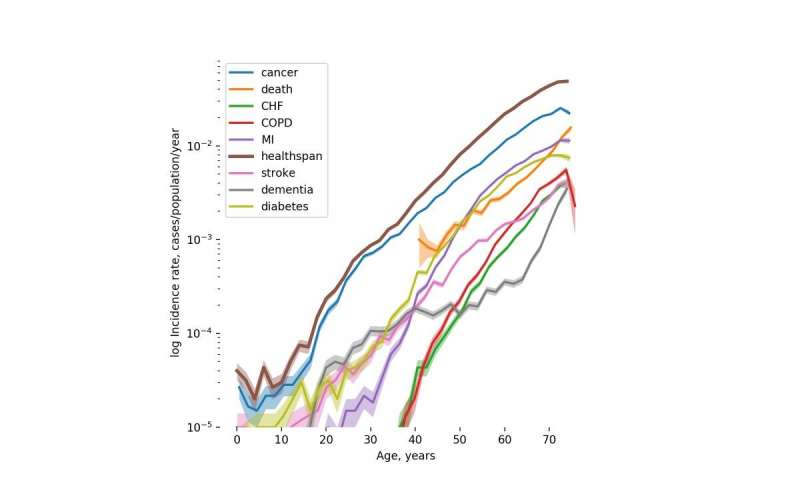 The global population age 60 or over is growing faster than all younger age groups and faces the tide of chronic diseases threatening their quality of life and posing challenges to healthcare and economic systems. To better understand the underlying biology behind healthspan—the healthy period of life before the first chronic disease manifestation—scientists from Gero and MIPT collaborated with researchers from PolyOmica, the University of Edinburgh and other institutions to analyze genetic data and medical histories of over 300,000 people aged 37 to 73 made available by UK Biobank.

The study published today in Communications Biology was lead by Dr. Peter Fedichev and Prof. Yurii Aulchenko. It shows that the most prevalent chronic conditions such as cancer, diabetes, chronic obstructive pulmonary disease, stroke, dementia, and some others apparently share the common underlying mechanism that is aging itself.

“According to Gompertz mortality law, the risk of death from all causes increases exponentially after the age of 40 and doubles approximately every 8 years”, explains Peter Fedichev, founder and CSO of Gero. “By analyzing the dynamics of disease incidence in the clinical data available from UKB, we observed that the risks of age-related diseases grow exponentially with age and double at a rate compatible with the Gompertz mortality law. This close relation between the most prevalent chronic diseases and mortality suggests that their risks could be driven by the same process, that is, aging. This is why healthspan can be used as a natural proxy for investigation of the genetic factors controlling the rate of aging, the ‘holy grail’ target for anti-aging interventions”.

To understand genetic factors associated with human healthspan, the researchers studied the genomes of 300,477 British individuals. Overall, 12 genetic loci affecting healthy life expectancy were discovered. To confirm that these results hold true for other ethnicities, they used genetic data of UK Biobank participants with self-reported European, African, South Asian, Chinese and Caribbean ancestry. Of the 12 SNPs, 11 increased risk both in discovery and in replication groups. Three of the genes affecting healthspan, HLA-DBQ, LPA, and CDKN2B, were previously associated with parental longevity, a proxy for overall life expectancy.

At least three genetic loci were associated with risk of multiple diseases and healthspan at the same time and therefore could form the genetic signature of aging. HLA-DQB1 was significantly associated with COPD, diabetes, cancer, and dementia in this study and was demonstrated to be associated with parental survival earlier. The genetic variants near TYR predict death in the prospective UKB cohort and are involved in the earlier onset of macular degeneration. The chromosome 20 locus containing C20orf112 was not associated with the incidence of any of the diseases at the full-genome level, and yet was affecting the healthspan of studied individuals.

The studies of longevity genetics are complicated due to the limited availability of datasets containing clinical data of genotyped individuals who already reached the end of lifespan. Healthspan as a target phenotype offers a promising new way to interrogate the genetics of human longevity by tapping the research potential of large cohorts of living individuals with rich clinical information, such as UK Biobank.