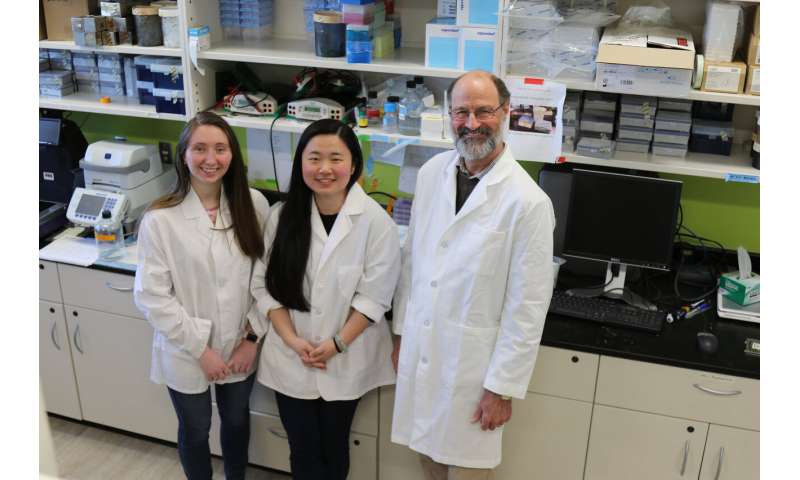 Two Michigan State University College of Osteopathic Medicine graduate students are advancing the science behind genetic mutations that cause rare forms of epilepsy and movement disorders.

Huijie Feng, a doctoral student in the Department of Pharmacology and Toxicology, and Casandra Larrivee, a master’s student in the comparative medicine and integrative biology program, have found that different mutations in the GNAO1 gene in mice correlate to different characteristics, or phenotypes, of movement disorders in humans.

The findings are published in PLoS ONE.

The work adds to research started in 2013 by Richard Neubig, professor and chair of MSU’s pharmacology and toxicology department, whose focus at that time was on cardiovascular disease. While using mice with a GNAO1 protein mutation, one unexpectedly had a seizure. This begged the question of whether the mutation could be linked to a seizure disorder.

Further investigation indicated that these mice were prone to seizures and soon after, four children who earlier had been diagnosed with Early Infantile Epileptic Encephalopathy, or EIEE, were also found to have the same mutations.

As more children with unusual disorders had their genomes sequenced, movement disorders and accompanying developmental delays were added to the characteristics of those with the mutation. Currently, around 100 children have been reported with 45 different mutations.

As patients are reported, Feng and Larrivee compile their genetic and clinical information. They then use specially designed mouse models to further study the mutations and resulting phenotypes.

“We wanted to develop a mouse model to see if it replicated the clinical characteristics of the neurological disorders caused by GNAO1 mutations in humans,” Feng said. “If so, it could become a valuable tool in understanding the neural mechanisms behind many of the characteristics patients exhibit who have GNAO1 mutations.”

The mouse models are created at MSU’s Transgenic and Genome Editing Facility using CRISPR technology to modify the DNA sequences of embryonic cells to the target gene. This ensures the genetic makeup of the mouse then matches the genetic mutation of a patient with one of the specific disorders.

The team uses behavioral tests in the mice, each test unveiling different aspects of how the mouse behaves under different conditions. For example, one test may look at how the mouse moves in a new environment, while a second test evaluates coordination skills.

They then look at how susceptible the mice are to seizures. Once they’ve established that the mouse model is positively linked to seizure disorders, they can confirm it’s a good model to use for further research.