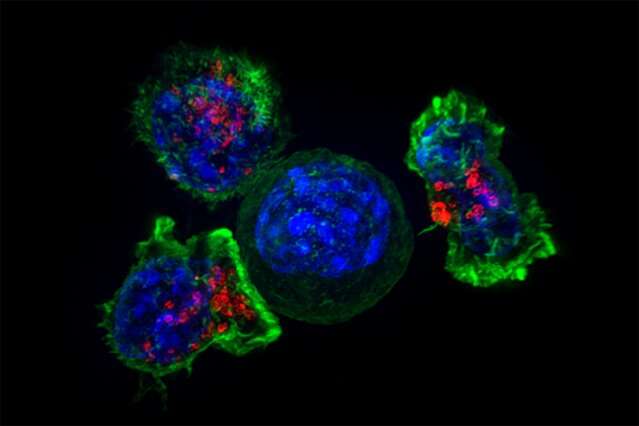 As cancer cells progress, they accumulate hundreds and even thousands of genetic and epigenetic changes, resulting in protein expression profiles that are radically different from that of healthy cells. But despite their heavily mutated proteome, cancer cells can evade recognition and attack by the immune system.

Immunotherapies, particularly checkpoint inhibitors that reinvigorate exhausted T cells, have revolutionized the treatment of certain forms of cancer. These breakthrough therapies have resulted in unprecedented response rates for some patients. Unfortunately, most cancers fail to respond to immunotherapies and new strategies are therefore needed to realize their full potential.

A team of cancer biologists including members of the laboratories of David H. Koch Professor of Biology Tyler Jacks, director of the Koch Institute for Integrative Cancer Research at MIT, and fellow Koch Institute member Forest White, the Ned C. and Janet Bemis Rice Professor and member of the MIT Center for Precision Cancer Medicine, took a complementary approach to boosting the immune system.

Although cancer cells are rife with mutant proteins, few of those proteins appear on a cell’s surface, where they can be recognized by immune cells. The researchers repurposed a well-studied class of anti-cancer drugs, heat shock protein 90 (HSP90) inhibitors, that make cancer cells easier to recognize by revealing their mutant proteomes.

Many HSP90 inhibitors have been studied extensively for the past several decades as potential cancer treatments. HSP90 protects the folded structure of a number of proteins when cells undergo stress, and in cancer cells plays an important role in stabilizing protein structure undermined by pervasive mutations. However, despite promising preclinical evidence, HSP90 inhibitors have produced discouraging outcomes in clinical trials, and none have achieved FDA approval.

In a study appearing in Clinical Cancer Research, the researchers identified a potential reason behind those disappointing results. HSP90 inhibitors have only been clinically tested at bolus doses—intermittent, large doses—that often result in unwanted side effects in patients.

RNA profiling of human clinical samples and cultured cancer cell lines revealed that this bolus-dosing schedule results in the profound suppression of immune activity as well as the activation of heat shock factor 1 protein (HSF1). Not only does HSF1 activate the cell’s heat shock response, which counteracts the effect of the HSP90 inhibitor, but it is known to be a powerful enabler of cancer cell malignancy.

In striking contrast, the researchers used cancer mouse models with intact immune systems to show that sustained, low-level dosing of HSP90 inhibitors avoids triggering both the heat shock response and the immunosuppression associated with high doses.

Using a method devised by the White lab that combines mass spectrometry-based proteomics and computational modeling, the researchers discovered that the new dosing regimen increased the number and diversity of peptides (protein fragments) on the cell surface. These peptides, which the team found to be released by HSP90 during sustained low-level inhibition, were then free to be taken up by the cell’s antigen-presenting machinery and used to flag patrolling immune cells.

“These results connect a fundamental aspect of cell biology—protein folding—to anti-tumor immune responses” says lead author Alex Jaeger, a postdoctoral fellow in the Jacks lab and a former member of the laboratory of the late MIT biologist and Professor Susan Lindquist, whose work inspired the study’s HSP90 dosing scheule. “Hopefully, our findings can reinvigorate interest in HSP90 inhibition as a complementary approach for immunotherapy.”