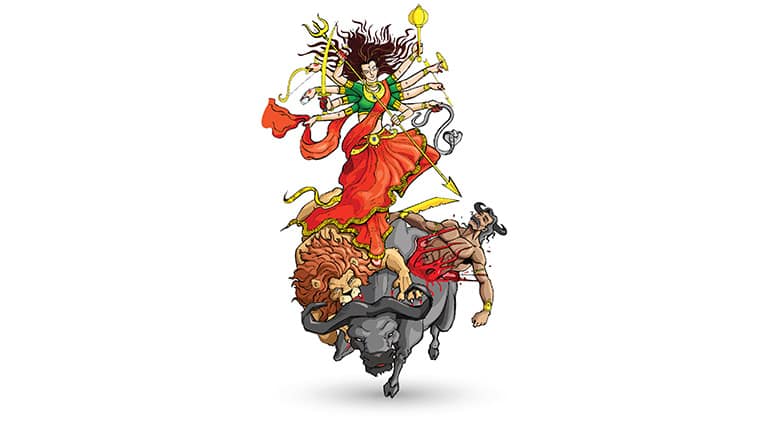 It is the season of fun, food and frolic in India. All the cities are drenched in celebrations with night skies illuminated in radiant fireworks reflecting the luminescence that is felt in the air. In Kolkata, the City of Joy, it’s a five-day carnival with themed and elaborate pandals that symbolise a fantastic tale of Goddess Durga and Mahishasur. The city is adorned with various holistic rituals, décor and public art installations, resplendent clothes and delicacies, reunion, rejuvenation and vast creativity.

Durga Puja is undoubtedly one of the most awaited celebrations which herald the advent of the goddess on the first day of Durga Puja known as “Mahalaya” and the worship, along with celebration, begins on Sasthi, the sixth day after the arrival of the goddess. Cities like Orissa, Kolkata, Mumbai, Bihar, etc, immerse in the aura of the divine feminine and it is a festival which tributes and epitomises “the victory of good over evil”.

While you, the family and neighborhoods predominantly celebrate Durga Puja, it is also a great time to regale our children with the interesting tale of Goddess Durga, which will help them obtain deeper insight to the virtues of life and into our country’s rich cultural history.

Goddess Durga, a multi-dimensional deity, signifies “Shakti”(power), courage, fearlessness, feminine energy, desire and the strength of transformation. The embodiment and tale of the goddess exemplifies female power with messages like: “A mother is considered to be the symbol of the pure creative force”, “She is fierce”, “Signifies feminine energy”, “the power of the universe lies within a women”, and “power to give birth not only to a child but also to so many creative manifestations”.

Thus, the fantastic mythological tale of vicious battle where Mahishasur, the buffalo demon, met his fate in the hands of Goddess Durga. The story will not only fascinate your kids but also help them to understand the divine power of the universe.

The buffalo demon, Mahishasur meditated for decades and after his hard work and long penance, pleased Lord Shiva, the supreme god, with his devotion. Shiva blessed him with a boon that no man or deity would be able to vanquish him. Mahishasur now grew extremely demonic and powerful. He became invincible and started to unleash terror as he slaughtered innocent lives.

He even tried to banish the abode of the gods. The war between Asurs (demons) whose leader was Mahishasur and gods, whose chief was Lord Indra, lasted for decades. The gods were simultaneously defeated by the powerful Mahishasur alone and everything at the end conquered by the demons.

The gods went to Lord Shiva and asked for his help. Shiva asked them to release their hidden “Shri Energy”, which is a feminine energy present among all the gods. They blended their energies together and the massive band of storm and lightening led to the creation of a beautiful female divine with 10 hands, the goddess Durga.

The gods worshipped her and called her invincible. Each of them armed her with some of the deadliest weapons. The Himalaya mountains gave her a lion and riding it, she began to roar. A fierce battle took place between Durga and Mahishasur and at last, she cut off his head and his remaining surviving remnants were scattered all over as his army fled in shock. Thus, she was widely praised as “Mahishasuramardini”.

This is truly an epic story of good over evil and all-knowing power of the feminine energy that bonds the entire universe together.

(The writer is a life-leadership coach and founder of Matrrix.)