All the dressings for a perfect family night out! Angelina Jolie brought along four of her six children, Zahara, Shiloh, Knox and Vivienne, to the premiere of Dumbo on Monday, March 11.

“She looked stunning in a dramatic, floaty chiffon white gown,” an eyewitness tells Us Weekly of the 43-year-old Maleficent actress’ ensemble for the evening, noting she was “sipping red wine and chatting with an older man for a few minutes” during the pre-party at the Dolby Ballroom in Los Angeles.

When it came to walking the red carpet with Zahara, 14, Shiloh 12, and 10-year-old twins Knox and Vivienne, the family couldn’t contain their happiness. Jolie and her brood — sans her eldest sons, Maddox, 17, and Pax, 15 — were hands-on as they posed for pictures, laughing their way down the carpet.

Back at the pre-party, Jolie’s kids, whom she shares with estranged husband Brad Pitt, went to town noshing “on plates of assorted corn dogs and hot dogs, bags of candy, cupcakes and chili cheese fries,” the eyewitness tells Us.

And it didn’t appear to bother the Salt actress. “They were really chowing down on them in silence, obviously super into the food, while Angelina seemed relaxed and unbothered by all the junk food,” the onlooker adds. “She was smiling a lot, and the vibe of the family was very low-key and content together.”

Last month, all six of Jolie’s children joined her for the premiere of The Boy Who Harnessed the Wind in New York City. She was also spotted out and about with the kids at multiple events in NYC earlier in February, including a screening of Prune Nourry’s documentary Serendipity at the Museum of Modern Art.

Jolie’s outings come more than four months after she and Pitt, 55, reached a custody agreement as they continue to hash out their divorce case. “A custody arrangement was agreed to weeks ago and has been signed by both parties and the judge,” Jolie’s lawyer told Us in November 2018.

Scroll down to see more pictures of the happy family at the Dumbo movie premiere! 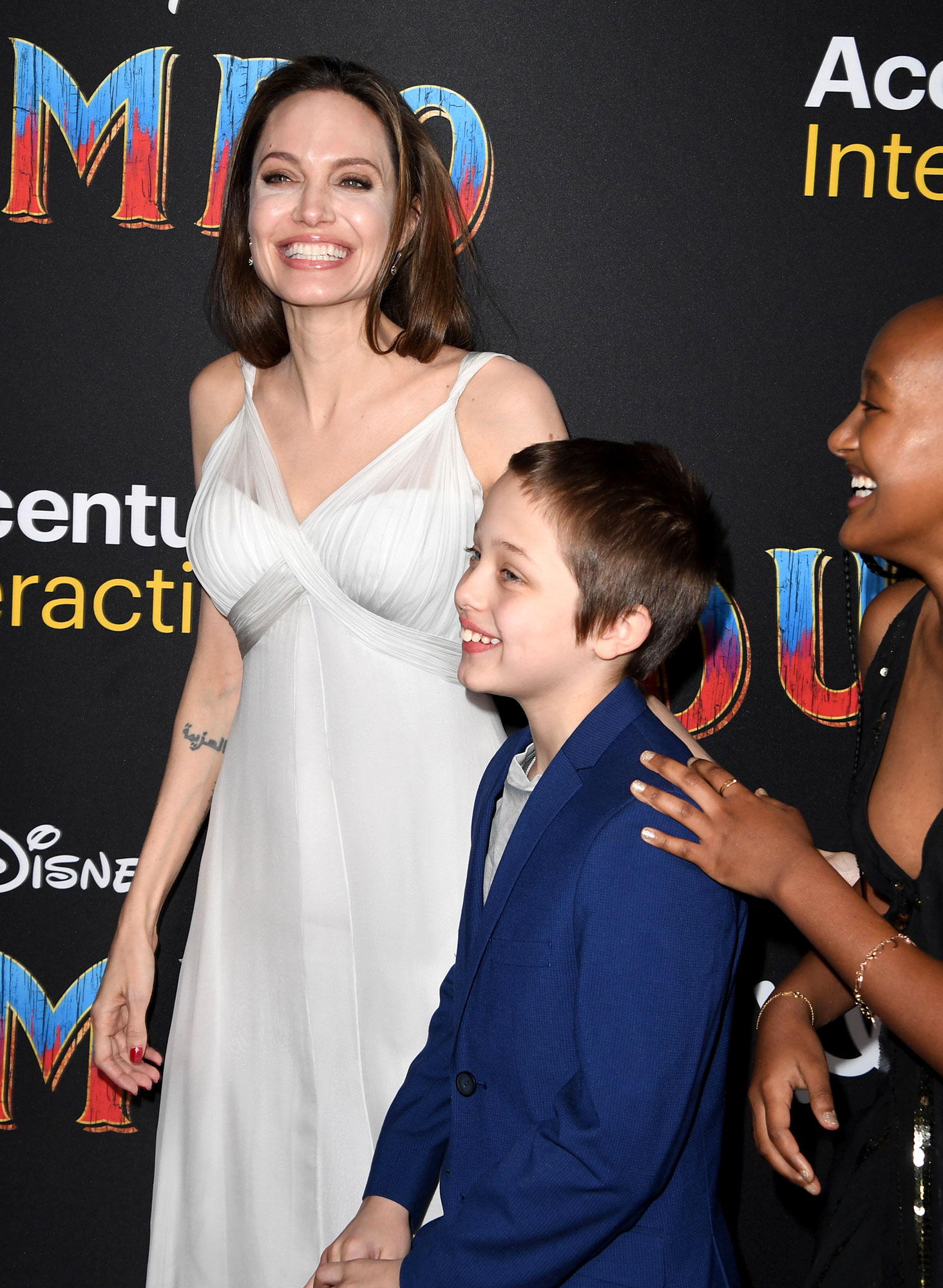 Jolie beamed, grinning ear to ear, as she walked alongside Knox and Zahara, who could be seen giggling. 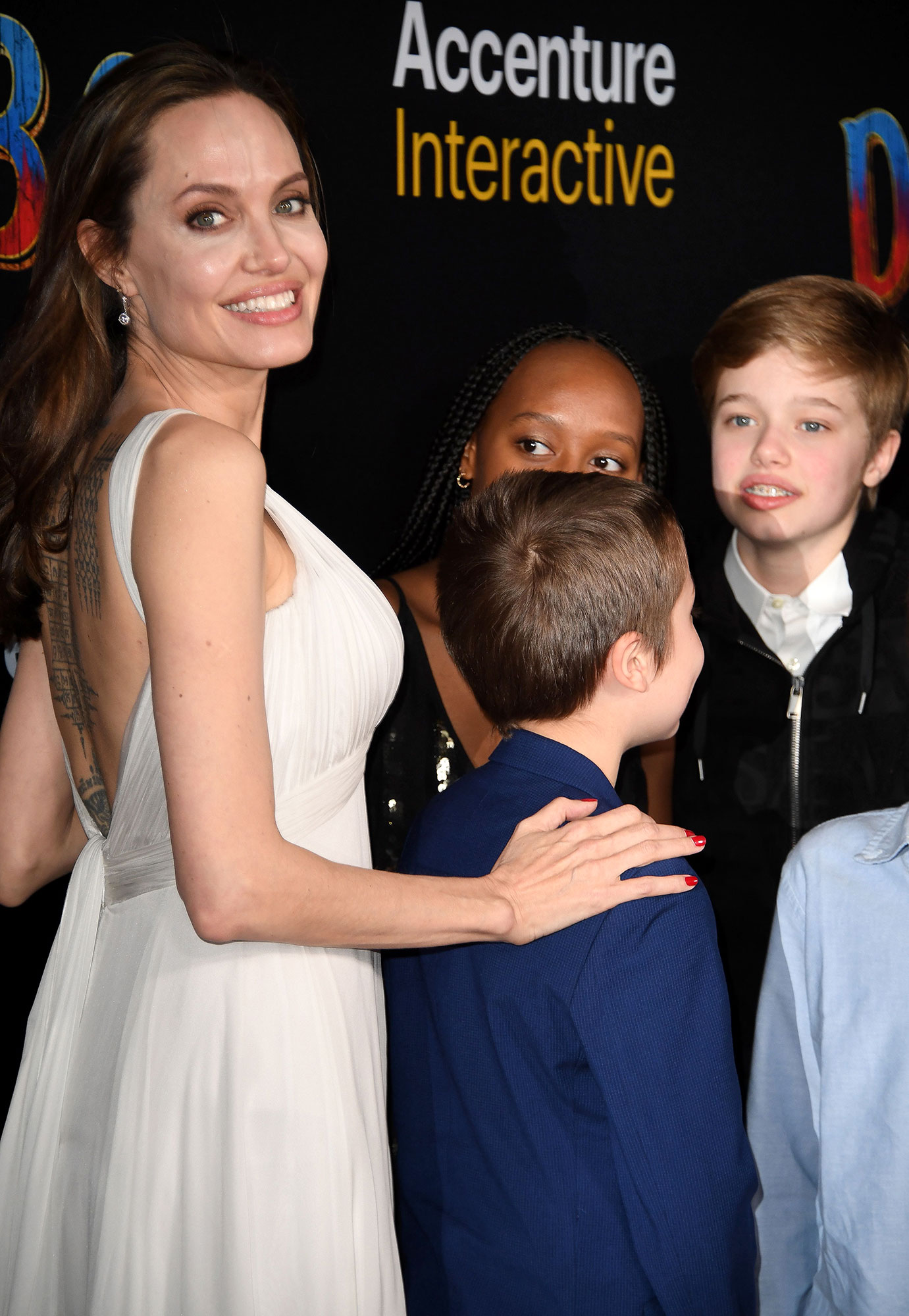 A Touch of Love

The Mr. & Mrs. Smith actress placed her hands on Knox’s shoulders as she smiled at the cameras. 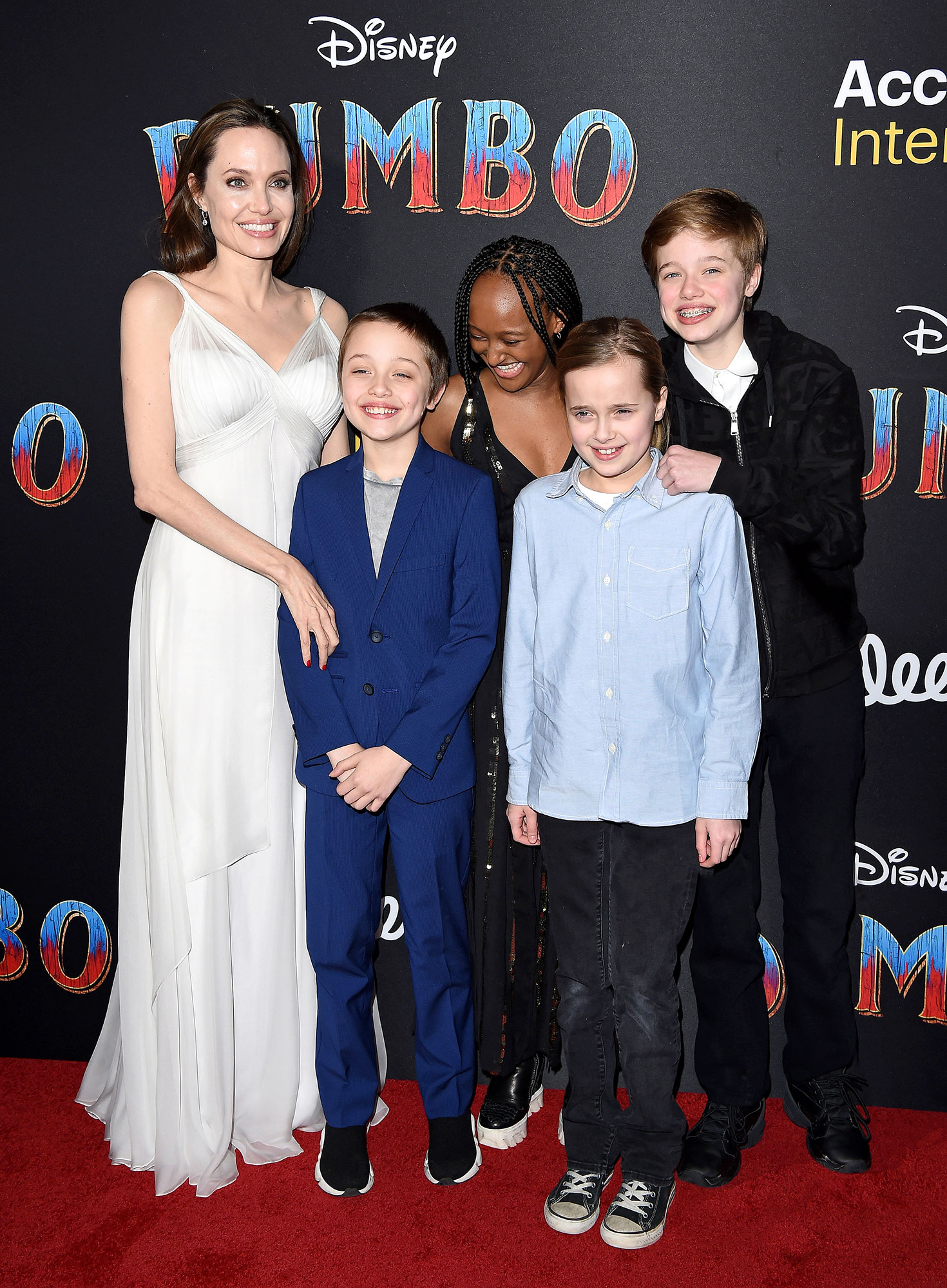 Jolie draped her arm around Knox as Zahara, Shiloh and Vivienne joined for a photo. “The kids seemed really polite and well-mannered and happy to be together, just talking quietly among themselves and finishing up their food,” the eyewitness tells Us. 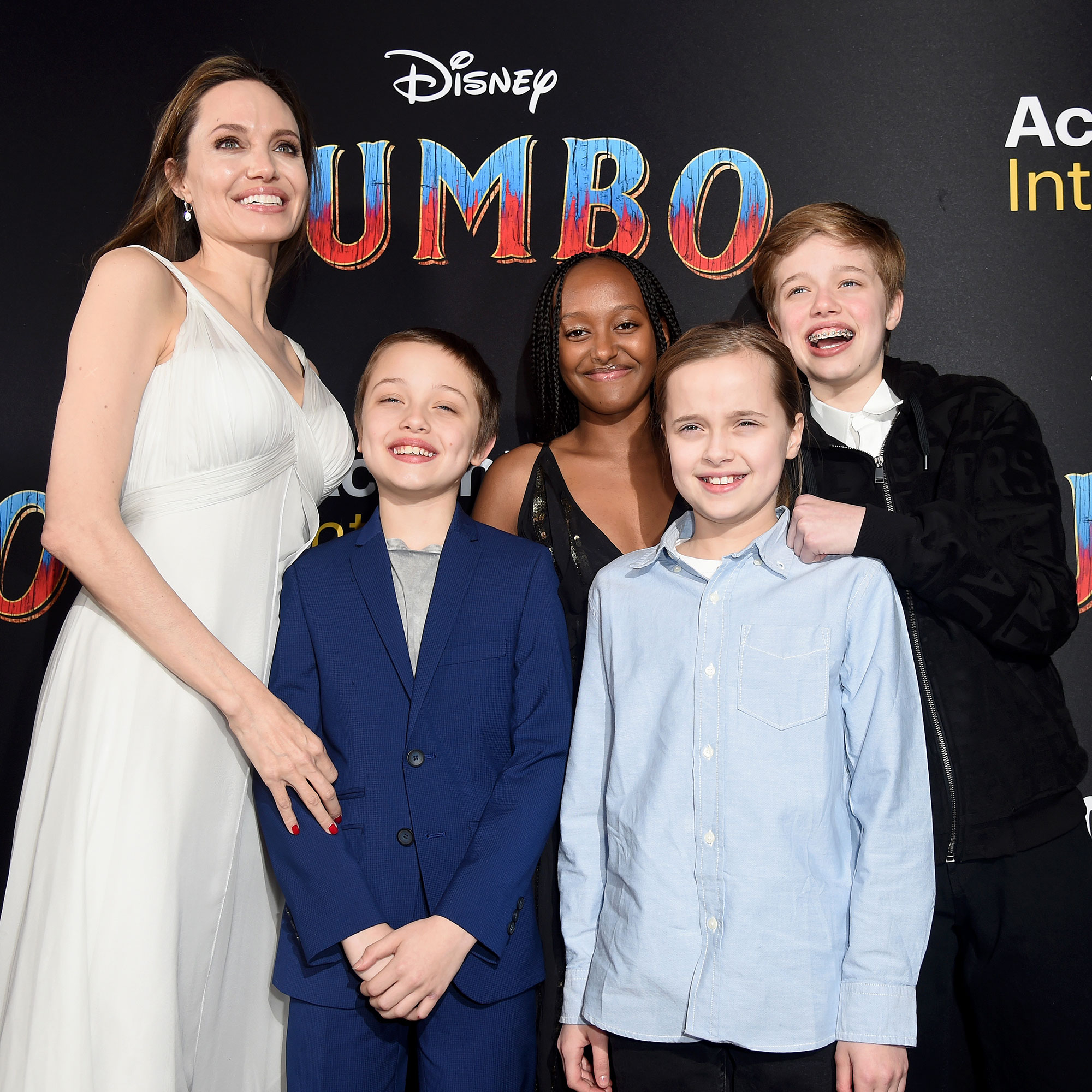 Twins Knox and Vivienne both sported blue for the outing, while Zahara stunned in a black dress. Meanwhile, Shiloh paired a black sweater with a white button-up shirt. 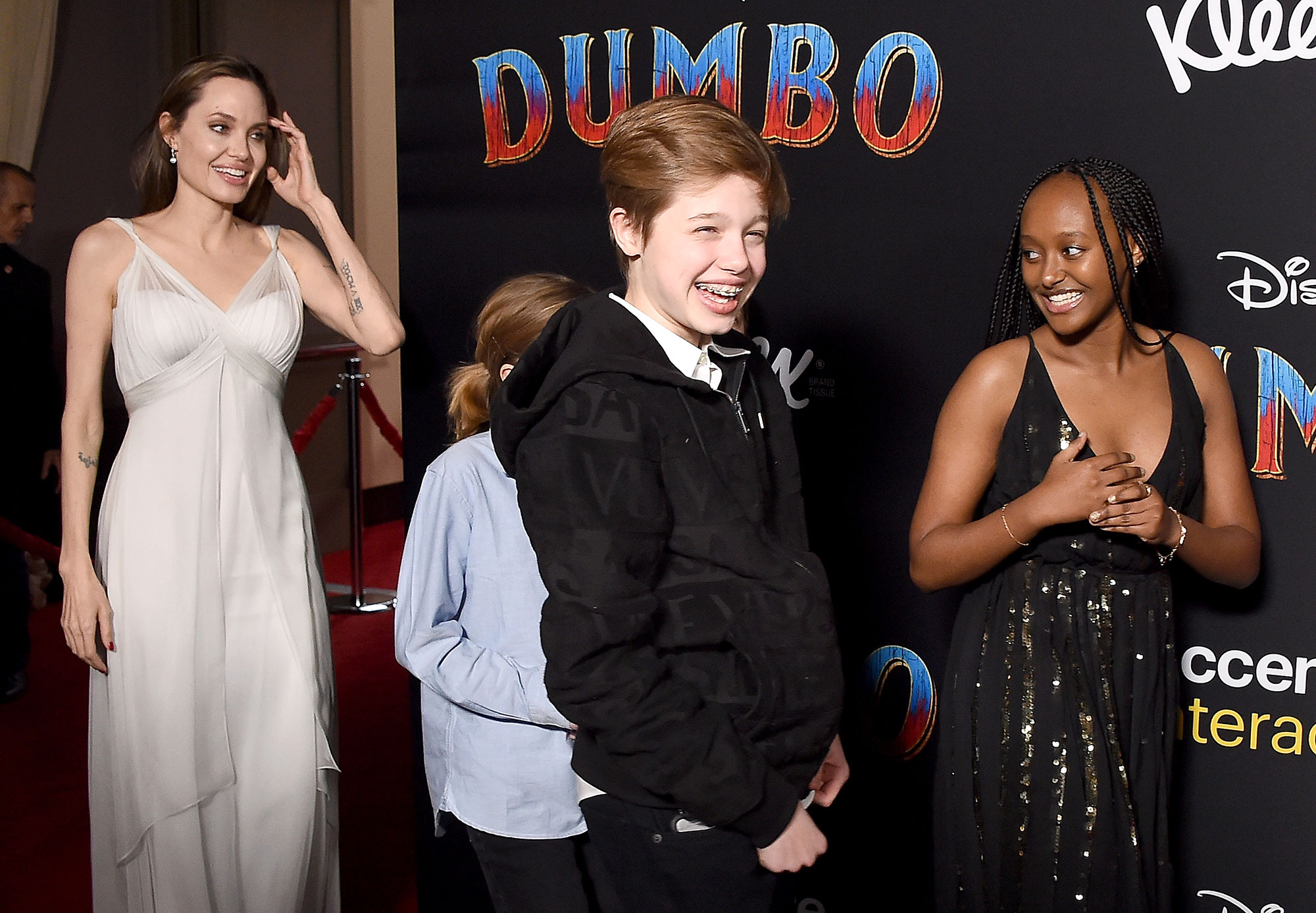 Jolie looked on with pride as her kids enjoyed themselves.

With reporting by Antonia Blyth