Kids are headed back to school and millions will face an unfair, classist burden upon their return: the issue of school lunch debt. According to the School Nutrition Association, 75 percent of school districts reported unpaid student meal debt at the end of the 2016-2017 year — and the impact on these students and their families is far-reaching.

In July, 40 families in Pennsylvania received a letter from the director of their school district’s federal programs that threatened parents who can’t afford to send their kids to school with a meal. “The result may be your child being removed from your home and placed in foster care,” it read, as reported by Pacific Standard. A Rhode Island school district gave cold meals to students with lunch debt until Chobani stepped in with a donation. In Minnesota, a number of schools attempted to bar teens from graduation ceremonies because they had lunch debt. A lunchroom employee in New Hampshire was fired for allowing a teen to take $8 worth of food and pay her back the next morning.

A number of heartwarming stories have gone viral — many about young kids who either donated their allowance or raised money to help their classmates pay for food. Although it’s wonderful that these kids are looking out for their peers, these aren’t “feel-good” stories: They’re an exhibit of how the government and authority figures have failed kids.

“I don’t think any parents will purposely abuse the system to let their kids have a free lunch or owe lunch money. However, we do have families with no financial means to pay for their kid’s lunch money,” Dr. Tenpao Lee, professor of economics at Niagara University, tells SheKnows. He points out that nowadays many countries provide free lunch to kids in school in order to materialize the basic human right of “freedom from hunger.” 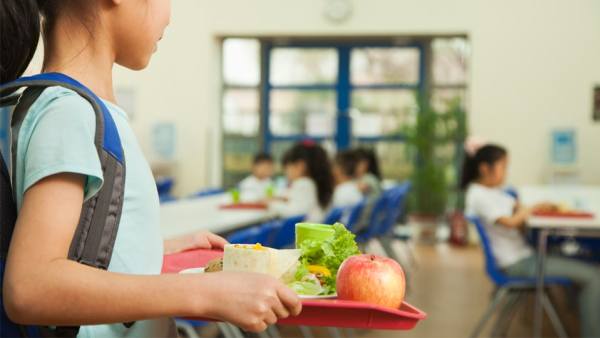 Yet in America, it looks like things are only getting worse. In July NBC reported that under the Trump administration’s proposed overhaul of the food stamp system, over 500,000 children would no longer be automatically eligible for free lunch. Lee emphasizes that, from an economic standpoint, it doesn’t need to be this way: “To solve the issue is not that difficult as the amount of money is really not that much in contrast to local government’s budget,” he explains. “As school systems in [America] are funded through property taxes, it will be easier to raise and reserve a certain amount of property taxes to serve lunches for all school kids.”

But as things currently stand, school lunch debt is taking a toll on the millions of kids who are affected. “Being denied access to food because of money that is due can create emotional scars that follow children the rest of their life,” Alisha Powell, PhD, LICSW, a therapist and social worker, tells SheKnows. “A sense of shame, low self esteem and low self worth can be the result of enforcing a rules around lunch debt.”

If you’re as infuriated by this situation as we are and are more fortunate economically, you’re probably wondering how you can help. Dr. Powell suggests creating a fund that allows community members to donate anonymously to help clear school debt. “The names of the identifying children do not need to be used but giving their age and the grade that they are in could humanize the effort and encourage community members to donate generously,” she says.

Donations can also be made to organizations like School Lunch Fairy, an organization that allows you to either donate to a fund that helps any district in need or specify the district you’d like to donate to. There are also crowdfunding efforts on platforms such as GoFundMe. And, as always, reach out to your elected officials to ask what they’re doing to help kids in need. If the answer is “nothing,” put pressure on them.

Due to the current crisis and the number of students who are impacted, now is certainly the time to help in any way we can. But, as Lee points out, it “may not be practical and may divide society based on economic means.” The long-term solution should be for the wealthiest country in the world to step up and enact policies and rules that ensure kids are fed, regardless of their economic status.

As we prepare to vote in the 2020 primaries and general election, research each and every candidate’s proposed policies and plans to put an end to this crisis. For example, Bernie Sanders has vowed to “provide year-round, free universal school meals” if elected. Sanders is, of course, running for president and this is an issue that all presidential candidates should address — but let’s not forget to fight on a state and local level as well. If the information isn’t readily available on a candidate’s website and they haven’t mentioned it, contact them, bring it to their attention, and put pressure on them to put forth a plan. As Lee stated, this is a crisis that simply doesn’t need to exist in America.