"Film pedagogy is the most effective and influential educational medium because it's a combination of audio-visual storytelling and entertainment that reaches them at an emotional level. Parents need to expose their kids to more meaningful content than just recreational games on their iPads." 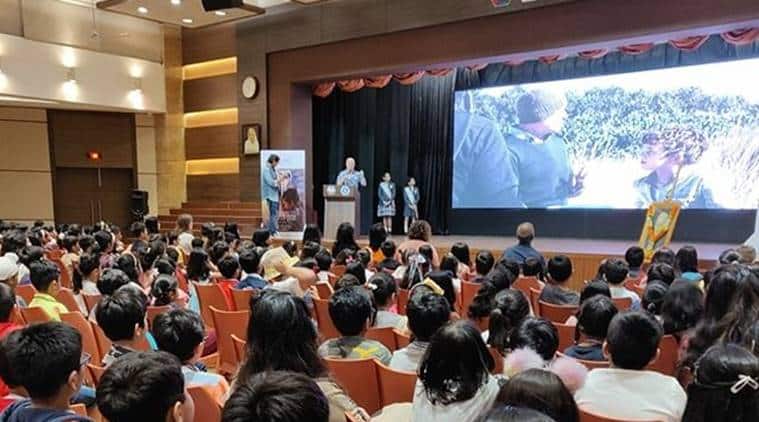 When children are exposed to other cultures and life lessons, that’s education too. Films are the most effective means to prepare students to cross barriers like language by generating curiosity and empathy, plus developing a global viewpoint.

In its successful third year since inception, International Kids Film Festival (IKFF) is screening quality content from prominent filmmakers across the globe, for children to watch within the comfort of their own schools. The annual event saw its 2019 launch at Velammal Bodhi Campus, Chennai. Any school in any part of the world can buy a license for one, two or four days to host and participate in DELL-IKFF 2019. The festival is divided into three parts: Watch Cinema (through Nov and Dec 2019), Learn Cinema (accessible till Jan 31, 2020) and Make Cinema (entries accepted till Jan 31, 2020). LXL Ideas, the organisation behind it, has also created an app called School Cinema to enable learning on the go, help students learn diverse perspectives and reflect at a personal level. It also benefits parents and teachers by helping to understand child psychology and equipping them with necessary skills valuable in professional and personal life.

Films are the most engaging medium to foster love for learning, according to Syed Sultan Ahmed, festival director, IKFF. Here’s what else he has to say:

How did the idea behind IKFF germinate?

LXL is one of the largest children’s filmmakers in the country, many of which have won awards internationally. I had the opportunity of travelling to many children’s film festivals all over the world. I realised that there are such fabulous films being made for children but sadly they don’t reach most kids. Largely, they only get to see whatever is commercially released. It may be marketed to them by a big Hollywood production but we don’t hear of the good independent cinema from Australia or Argentina being shown here. There is no dearth of good content, just a lack of availability. You’ll only find them in a film festival, not many of which happen and maybe 5000 kids in all attend it, whereas any decent sized school would have 5000 kids within its campus. So, instead of waiting for children to come to the festival, we thought of turning it around and offering to take quality films to schools. We have curated around a hundred films over the past six months, from 35 countries, in 25 languages. Our team has watched over 800 films to curate this content. Any good idea takes root over time. In India, we went to around 7000 government schools and roughly 2000 private schools have hosted us. What’s exciting was going to rural and semi-urban areas, where a film festival probably would never have been accessible. What do you keep in mind while curating the festival?

Our films fall into different age categories: below 8, 8-12, 13-17 years. There are two broad outlines, films which tell good stories and the other aspect is the skill and craft of filmmaking. Kids get exposed to different formats like animation, claymation, live action, mixed motion. It goes way beyond shooting something with your phone camera. They learn about good story ideas, the planning that goes into it, editing, sound, etc. As one of the world’s largest filmmaking countries, we make a pathetic low number of good films for children. Films like Village Rockstars are a rarity. If I asked you to name 10 good films that came out last year, you’d struggle. IKFF is a good idea because it is relevant, scalable and affordable — all the qualities that a good learning programme should have.

How can independent filmmakers approach you?

From January to September, we look at entries submitted through our website. We have a tutorial online for kids to learn the craft because we seek to teach them storytelling in an audio-visual format while most schools are happy just to teach them to read and write. Sadly, filmmaking has been looked at just as an extra-curricular activity so far. We had a student competition, the winners of which came to Mumbai from Italy and Kyrgyzstan. Similarly, our winners from last year from India went to Italy as jury members. This year too, the winners will be sent to showcase their films at four festivals we’ve partnered with in South Korea, Macedonia and Italy.

What kind of change do you want to bring to schools through cinema? Do you have a message for parents as well?

Education is not about books alone, it’s about knowing the world. We have no idea where our children are going to live in the future. We need to prepare them for the larger world. One of the best ways is to introduce them to world cultures and languages. A film festival is no longer a novelty, it is basic education. Children need to watch well-made films from legendary filmmakers so that they can absorb and create good content themselves in the future. Otherwise, they’ll only dip into the limited pool of resources that they’ve been exposed to. Education isn’t also about whatever has been taught in the past, it’s about looking at what will work in the future. As a society, we hope that our children will solve future problems. So, films are also a great way of exposing them to global issues and challenges. Film pedagogy is the most effective and influential educational medium because it’s a combination of audio-visual storytelling and entertainment that reaches them at an emotional level. Parents need to expose their kids to more meaningful content than just recreational games on their iPads. If the whole family watches together, it becomes a bonding experience as well.

For all the latest Parenting News, download Indian Express App