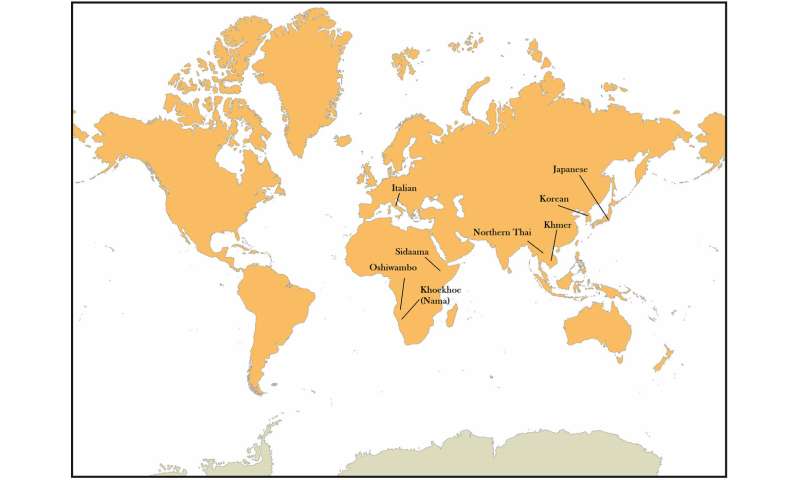 Several studies have investigated how humans store and retrieve memories under different conditions. Typically, stimuli presented at the beginning and at the end of a list are recalled better than stimuli from the middle. But are these findings universal and generalizable across languages and cultures? An international research team led by Federica Amici from the Max Planck Institute for Evolutionary Anthropology in Leipzig, Germany, has recently investigated this question.

The group, including psychologists, linguists and biologists from five countries, traveled around the world to conduct memory tests in eight human cultures speaking different languages. “The best part of this project was to cross deserts and seas to reach amazing people speaking the most wonderful languages ever, from Sidaama, to Khoekhoe and Khmer, and know that these languages may provide them with a unique vision of the world,” says Amici

The relationship between language and thought is controversial. One hypothesis is that language fosters habits of information processing that are retained even in non-linguistic domains. Languages, for instance, vary in their branching direction. In typical right-branching (RB) languages, like Italian, the head of the sentence usually comes first, followed by a sequence of modifiers that provide additional information about the head, e.g., “The man who was sitting at the bus stop.” In contrast, in left-branching (LB) languages, like Japanese, modifiers generally precede heads, e.g., “Who was sitting at the bus stop, the man.”

In RB languages, speakers process information incrementally, given that heads are presented first and modifiers rarely affect previous parsing decisions. In contrast, LB structures can be highly ambiguous until the end, because initial modifiers often acquire a clear meaning only after the head has been parsed. Therefore, LB speakers may need to retain initial modifiers in working memory until the head is encountered to comprehend the sentence.

By providing participants with a series of classic memory tasks, the research team could compare their performance at recalling words, numbers and spatial stimuli. “The main finding of the study is that left-branching speakers were better at remembering initial stimuli across verbal and non-verbal working memory tasks, probably because real-time sentence comprehension heavily relies on retaining initial information in LB languages, but not in RB languages,” says Alejandro Sanchéz Amaro, currently in the Department of Cognitive Science at the University of California, San Diego.

The main novelty of this study is that the link between language and thought might not be confined to conceptual representations and semantic biases, but rather extend to syntax and its role in the manner of processing sequential information. Spoken language affects the way people process, store and retrieve information. The fact that branching and word order may be linked to such a fundamental cognitive process as memory opens up new and exciting avenues for psycholinguistic research toward expanding the pool of languages and populations investigated.