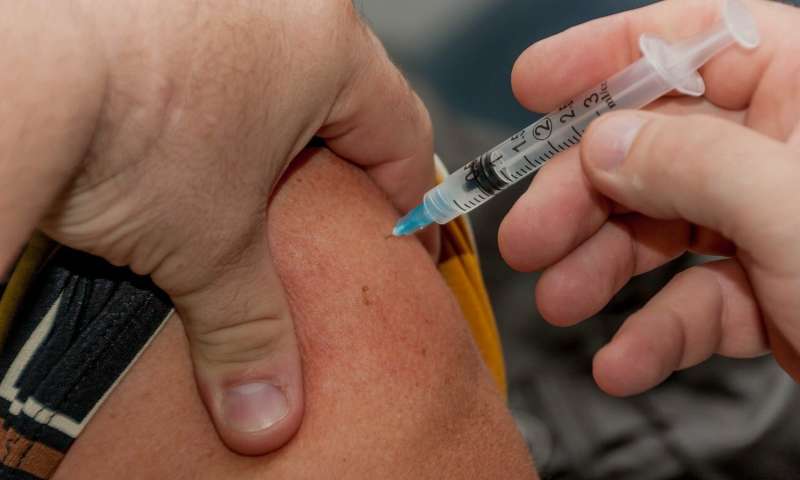 When flu season peaks after mid-winter, tens of thousands of influenza cases and hundreds of deaths can likely be avoided if older adults wait until October to get their flu immunization, a University of Pittsburgh School of Medicine analysis reveals in the April issue of the American Journal of Preventive Medicine.

The protection offered by the flu vaccine wanes as the season progresses, a previous study has shown, which indicates that waiting until closer to the start of flu season ensures greater immunity. However, if flu season arrives early or if delayed vaccination prompts more than one in 20 people who would otherwise be vaccinated to skip their flu shot, then the gains are negated, according to the new study, which is online now.

“There’s controversy in the public health community over whether influenza vaccination should happen as soon as the vaccine becomes available in August, or if it’s better to wait until later in the fall,” said lead author Kenneth J. Smith, M.D., M.S., professor of medicine and clinical and translational science in Pitt’s Division of General Internal Medicine. “What we’ve found is that it’s a balancing act, but if a clinician believes a patient will return for vaccination in the fall, then our analysis shows that it is best if they advise that patient to wait.”

Smith and his co-authors ran computer models to compare a “compressed” vaccination period that begins in October to the status quo, which typically begins in August, for people aged 65 or older. They focused on older adults because waning vaccine effectiveness is more of a threat to the elderly whose immune systems don’t typically mount as strong of a defense to infections as younger people. Older adults also have higher early vaccination rates than younger adults.

Using data from the 2013-2014 and 2014-2015 flu seasons, the researchers forecast the number of cases, hospitalizations and deaths for compressed and status quo vaccination scenarios if the flu season had peaked in December, February or April—early, normal or late, respectively. “Peak” refers to the period when the greatest number of people are sick that season.

In the projections for the normal and late flu seasons, compressed vaccination saved as many as 258 lives and prevented up to 22,062 cases of flu, compared to status quo vaccination timing.

But if flu season peaked early, as it does in about one of every four seasons, the model projected that dozens to hundreds of older adults would die because they wouldn’t have been vaccinated in time.

In addition, the team found that if more than 5.5 percent of older adults who defer vaccination ultimately don’t get the flu shot, then compressed vaccination will be a failure and will prevent fewer influenza cases than status quo vaccination.

Smith says these findings can help clinicians determine when to offer their patients flu immunizations—if the patients have multiple appointments each year and will be in the office in the fall or if they are in a senior community where flu immunization is offered through a scheduled clinic, then waiting is likely advisable. But if a patient comes in only for an annual check-up and is unlikely to seek out the flu vaccine in the fall, or if offering vaccinations during a compressed window will put overwhelming strain on the clinic, then getting vaccinated when convenient—even if that’s in August—is best.