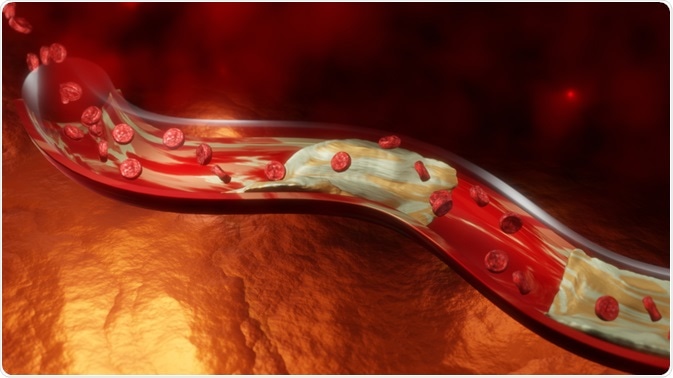 Atherosclerosis is the build-up of fatty deposits called atheromatous plaques within the walls of major blood vessels (arteries) causing a gradual narrowing of their lumen diameters to restrict blood flow and oxygen transport to tissue over time. PAD is essentially caused by atherosclerosis of peripheral arteries (especially at major branch points).

Atherosclerosis in the heart is referred to as coronary artery disease and if it occurs in the brain it is called cerebrovascular disease, including stroke and vascular dementia. PAD refers to atherosclerosis of other parts of the body, such as in the feet and legs. PAD is estimated to affect over 200 million people worldwide and its prevalence increases with advancing age.

What are the symptoms of peripheral arterial disease?

The majority of people with PAD; especially in earlier stages, will not have any noticeable symptoms. Once the affected areas e.g., legs, progressively worsen, symptoms will become more apparent.

The most common symptom of PAD that appears first is known as intermittent claudication – which is muscle pain or cramping upon physical exertion that is relieved upon rest. In addition, the particular region suffering from PAD may also have a lower temperature compared to the rest of the body as well as some redness.

Other symptoms that may develop can include:

If left untreated, PAD can progressively worsen leading to critical limb ischemia (sudden drop in flow to the affected region) and gangrene (death or necrosis of tissue within that region). This could be limited to extremities such as toes, or larger areas of the leg, for example. Unfortunately, tissue necrosis caused by critical limb ischemia is irreversible and may require amputation.

What are the risk factors for peripheral arterial disease?

Other risk groups that have been identified who may have an increased risk are:

How is peripheral arterial disease diagnosed and treated?

PAD is diagnosed by performing a physical examination and confirmatory testing by a physician. Specific examinations are made to assess PAD which include:

Treating PAD before it progresses is important in minimizing the complications and potentially devastating consequences that can arise. These include modifying risk factors, lifestyle and treatments for atherosclerosis, diabetes, hypertension & dyslipidemia, etc.

The most common ways to minimize the risk of PAD worsening is to:

Surgical interventions can include:

In summary, peripheral arterial disease (PAD) is the atherosclerosis (build-up of fatty plaques and narrowing of arteries) of peripheral arteries e.g., in the leg. Symptoms usually present later in disease, often characterized by intermittent claudication – pain upon physical exertion, in addition to the affected area feeling colder and having a lower pulse/blood pressure. PAD can be treated before tissue death (necrosis) occurs by a variety of physical, pharmacological and surgical interventions, however, if left untreated can result in gangrene and in need of amputation.

Osman is a Postdoctoral Research Associate at the University of Sheffield studying the impact of cardiovascular disease (atherosclerosis) on neurovascular function in vascular dementia and Alzheimer's disease using pre-clinical models and neuroimaging techniques. He is based in the Department of Infection, Immunity & Cardiovascular Disease in the Faculty of Medicine at Sheffield.