Honey has long been considered to be a food with great nutritional and therapeutic value. It is composed of two monosaccharides (glucose and fructose) and is rich in several various minerals, proteins, vitamins, organic acids, flavonoids, phenolic acids, and enzymes. These compounds have antimicrobial, antioxidant, anti-inflammatory, hepatoprotective, antidepressant, and immunomodulatory activity. These tend to vary with the weather and geographical conditions of the pollen source. 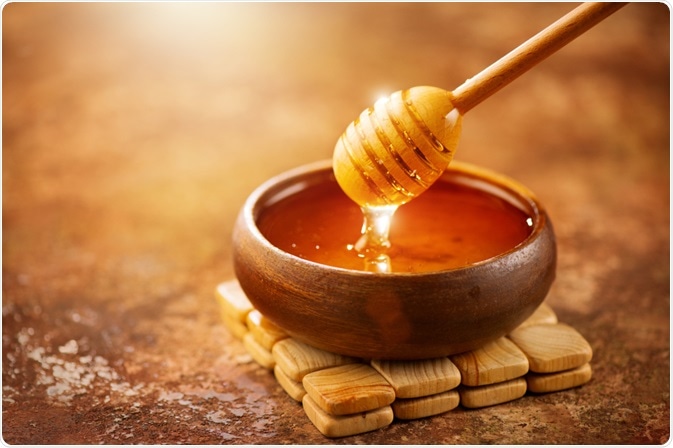 The composition of honey

Honey is comprised of 95-98% carbohydrate, the basic sugars (which comprises 60-70%), glucose, and fructose. Among the simple sugars, there are also several mono-, di-, tri, and oligosaccharides present including trehalose, arabinose, turanose, erlose, sucrose, maltose, and raffinose.

Among the proteins, the amino acids of physiological significance are arginine, cysteine, glutamic acid, aspartic acid, and proline. There is considerable variance in the composition of amino acids, with leucine estimated as the most variable amino acid found in honey.

The bioactive compound of honey contributes to its well-established health benefits. The most functionally important compounds contained in honey include vitamins E, K, A, B2, B6, and C as well as pantothenic acid, phenolics, flavonoids, and fatty acids.

The biological activity of honey is particularly associated with the presence of phenolic compounds (phenolic acids and flavonoids); moreover, different phytochemicals, such as ascorbic acid, amino acids, and different proteins, form the basis of its properties.

Literature suggests that honey contains strong anti-oxidative agents. This is dependent on its concentration and where the honey is sourced from. Consequently, antioxidative properties can minimize the risk, or mitigate the effects of inflammatory diseases such as coronary artery disease aging, neurological decline, and cancer.

The substances that form the basis of this antioxidant capacity are polyphenols and phenolic acids. Characteristic polyphenols in phenolic acids are endemic to certain varieties of honey; for example, the flavonol kaempferol can be found in Rosemary honey whereas is quercetin is found in sunflower honey.

There is a long history of using honey in wound healing worldwide as a consequence of its antimicrobial function. Specific varieties of honey have been shown to display broad-spectrum antimicrobial activity against antibiotic-resistant pathogens. The difference in this antimicrobial capacity is the flowers from which the honey is produced; particularly, the environmental conditions and location of the flowers affect this.

The antibacterial action of honey has been attributed to hydrogen peroxide which is formed by the enzyme glucose oxidase. Both peroxide activity and non-peroxide mechanisms form the basis of antimicrobial action. In general, honey shows broad-spectrum activity against gram-positive and negative bacteria.

Owing to its antimicrobial activity, honey is used to treat coughs. Honey has demonstrated an ability to improve clinical symptoms among different treatment groups. Honey additionally has an excellent safety profile alongside beneficial effects on preventing and treating coughs. The effect of honey is particularly noticeable in children, as coughs are common among this age group due to their relatively immature immune systems.

Moreover, mechanisms used for the treatment of cough result in drowsiness – an undesirable side effect. In a study of 300 children aged one to five years old with upper respiratory tract infection, a single nightly dose of three types of honey showed a significantly greater improvement compared to a placebo group.

Honey is also used in the medical setting accelerate to wound healing, particularly for burns. Honey is effective on different kinds of wounds where other wound healing methods are unsuccessful; It also minimizes the risk of infection.

Honey and the effect on Glycemic index

There is some controversy regarding the effects of simple sugars and changes in blood glucose. Generally, carbohydrates with a minimum Glycemic index (GI) result in low blood glucose; the inverse is also true. Honey is derived from a single type of flower that has varying ratios of fructose to glucose. For example, some honey has relatively higher concentrations of fructose, accompanied by a lower GI.

Low GI honey is more valued relative to high GI honey as it minimizes the maximal spike in blood sugar which is linked to impaired glucose metabolism and its downstream consequences i.e. diabetes. Consequently, consuming honey with a low glycaemic index, such as Acacia honey can provide physiological advantages over other forms of sweetener.

The anti-cancer effects of honey

There is a growing body of evidence that suggests honey may possess an anti-cancer property, exacting its effect through several mechanisms including antioxidant activity, P53 regulation, cell cycle arrest, antimutagenic activity, and estrogen modulation. Honey can also elicit anti-cancer effects through its anti-inflammatory and immunomodulatory activity, and the modulation of cyclooxygenase 2 and tumor necrosis factor.

The anti-tumor effects of honey have been examined using several cancer cell lines and tissue. Honey has been proven to decrease the tumorigenicity of different cancer types including breast, lung, skin, renal, prostate, colorectal, and cervical cancer. Moreover, honey has been proven to enhance the effects of chemotherapeutic drugs such as 5-fluorouracil and paclitaxel.

Honey is both highly nutritional and health-promoting. It displays several potent functional activities including antioxidant, anti-inflammatory, antibacterial, and anti-tumor properties among several others. Therefore, honey is recommended as a valuable dietary supplement as well as a useful adjunct to modern medicine. It should be noted, however, that the implications of honey in metabolic disorders including diabetes must be further investigated. As with all functional foods, honey should be incorporated In moderation as part of a healthy balanced diet.

Hidaya is a science communications enthusiast who has recently graduated and is embarking on a career in the science and medical copywriting. She has a B.Sc. in Biochemistry from The University of Manchester. She is passionate about writing and is particularly interested in microbiology, immunology, and biochemistry.