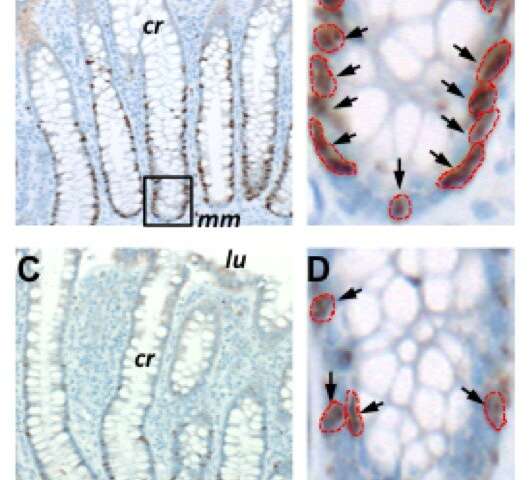 The researchers say the findings may help explain why cancer—long considered a disease of aging, with incidence highest among people over age 65—has been found to decelerate in occurrence at the extreme end of human life. The findings, they say, also provide clues about cell biology that might eventually lead to a better understanding of cancer.

The findings were published Sept. 23 in the Proceedings of the National Academy of Sciences.

Senior investigator Bert Vogelstein, M.D., the Clayton Professor of Oncology, co-director of the Ludwig Center at the Johns Hopkins Kimmel Cancer Center and a Howard Hughes Medical Institute investigator, pioneered the discovery that cancer is spurred by an accumulation of genetic mutations caused by mistakes cells make when copying DNA during cell division. Research in the last several decades assumed that such mutations accumulate over time at a steady rate, explains study leader Cristian Tomasetti, Ph.D., associate professor of oncology. However, when Vogelstein, Tomasetti and colleagues reanalyzed old data in dozens of published papers as part of this study, they found that mutations accumulate more slowly in old age.

To test this hypothesis, the team analyzed cell replication rates in samples of various healthy tissues collected during biopsies and other medical procedures from more than 300 patients in their 20s and in their 80s. The researchers used dyes to stain various standard, tried-and-true molecular markers of cell division, such as the Ki67 antibody, to calculate cell multiplication rates, both “by eye” and with automated computer software.

The findings have numerous implications for better understanding cancer and aging, Tomasetti and Vogelstein say. For example, Vogelstein says, it’s long been known that the incidence of most human cancers rises exponentially throughout a person’s life, but decelerates or even flattens out for several cancers toward the end of life—a phenomenon that wouldn’t make sense if cells were always steadily dividing and accumulating mutations at the same rate.

“If the rate of cell division slows in old age,” Tomasetti says, “cells are probably accumulating fewer cancer-causing mutations at the end of life.”

The finding could also have implications in better interpreting data derived from laboratory animal models, the researchers say. When they performed a similar analysis of cell replication using tissue from young and old lab mice, they found no significant differences in the division rate—a considerable distinction between mice and humans that could make it more difficult to use aging mouse data as a proxy for aging humans.