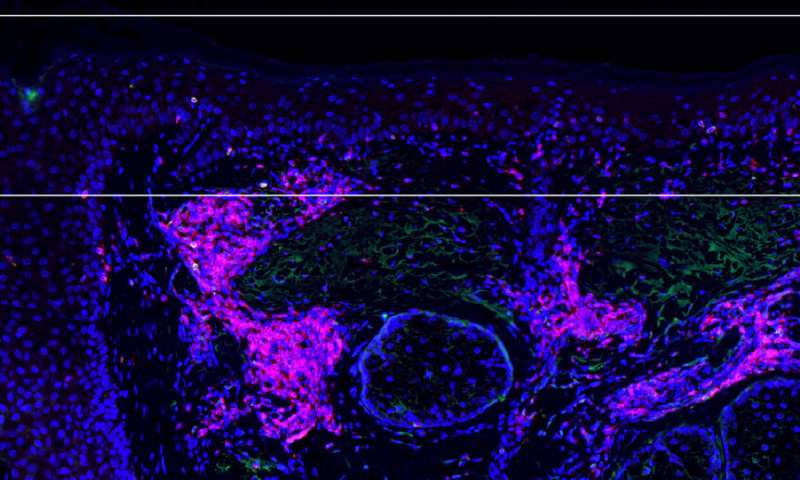 A treatment previously shown to clear the precancerous skin lesions called actinic keratosis now appears to reduce the chance that the treated skin will develop squamous cell carcinomas (SCCs), the second most common form of skin cancer. In their paper being published online in JCI Insight, a team led by a Massachusetts General Hospital (MGH) investigator reports that treatment with the combination of two FDA-approved drugs—a topical chemotherapy and an immune-system-activating compound—reduced the risk of SCC development on the face and scalp by almost 75 percent.

“This finding provides the first clinical proof-of-concept that an immunotherapy directed against premalignant tumors can prevent cancer,” says Shawn Demehri, MD, Ph.D., of the MGH Center for Cancer Immunology and the Cutaneous Biology Research Center, senior author of the report. “We hope our findings will establish that the use of premalignant lesions as personalized therapeutic targets can train the immune system against the progression to cancer.”

Overall, a greater proportion of participants who received the combination treatment for lesions on their face and scalp remained free of SCC development for more than three years after treatment, with only 7 percent developing SCC compared with 28 percent in the control group. Samples of treated face and scalp tissues of 22 participants showed higher levels of tissue-resident memory T cells—both CD4+ and CD8+ T cells—in normal skin treated with the combination treatment, compared with the control group.

While treatment did not reduce SCC development on the arms, the investigators believe that may result from greater immune system activation on the face and scalp along with better penetration of topical treatments on those areas. They hypothesize that longer treatment with calcipotriol plus 5-FU may be required to reduce SCC risk on the arms and other parts of the body.

“Our previous findings that calcipotriol plus 5-FU is highly effective for actinic keratosis clearance has led to its being increasingly used in clinics around the world, although further clinical studies are required for formal FDA approval,” says Demehri, an assistant professor of Dermatology at Harvard Medical School. “The treatment of SCC can be costly and has significant side effects, and it can be deadly, particularly for patients with suppressed immune systems.