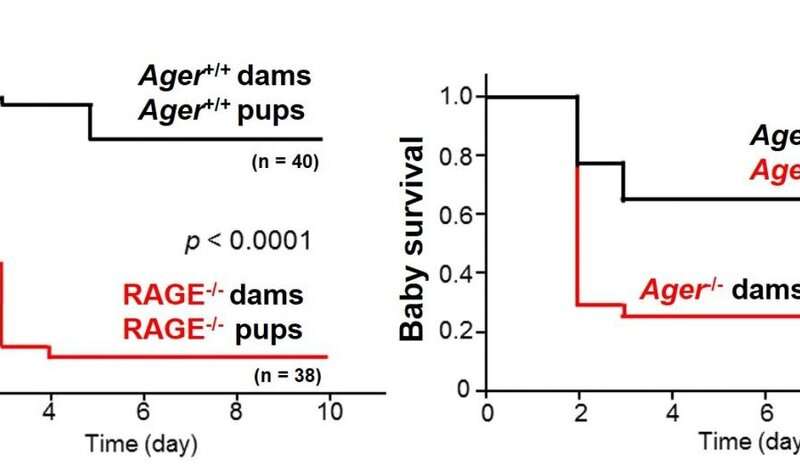 Oxytocin is essential in activities of the social brain such as trust and love and in maternal bonding behaviors. It is produced in the brain and secreted into the circulation. Here, by analyzing maternal behaviors of RAGE gene-manipulated mice, oxytocin was found to be transported back to the brain, crossing the blood-brain barrier (BBB), an extremely effective barrier, by binding to the receptor for advanced glycation end-products (RAGE) on capillary endothelial cells of the BBB.

Oxytocin is a cyclic peptide consisting of 9 amino acid residues. Oxytocin is primarily produced by the neurosecretory cells in paraventricular hypothalamic and supraoptic nuclei and released from the nerve endings of the posterior pituitary into the circulation. Its peripheral effects include uterine contractions upon induction of labor pains and initiation of lactation. Recently, it has been known that oxytocin is involved in central actions upon regions of the ‘social brain’ such as the amygdala and the hypothalamus, important in the formation of trust and love. The most basic unit needing trust and love is the parent-child relationship, especially maternal bonding behaviors. Child rearing is a social behavior not restricted to humans but also seen in the mouse; the maternal nurturing behaviors serve to enhance the survival rate of offspring.

A Kanazawa University multidisciplinary research group, who led the present study as the core of an international research team with scientists from two domestic universities, Kanazawa Medical University and Tohoku University, as well as from Krasnoyarsk State Medical University, Russia, and Harvard Medical School, US, has been focusing its research on the protein molecule, RAGE (Receptor for Advanced Glycation End-products)*3), by generating and analyzing RAGE overexpressing transgenic mice (RAGE-Tg) and, especially, RAGE knockout mice (RAGE-KO). RAGE was first discovered as a cell membrane receptor of advanced glycation end-products, AGE, which is produced by a glycation reaction. However, RAGE is now considered to be a member of the class of pattern recognition receptors involved in innate immunity such as the Toll-like receptors. RAGE is thought to be causatively involved in a variety of illnesses.

When females from a colony of homozygous RAGE-KO mice experienced environmental stress, such as when being transferred to a new mouse cage, we observed that the survival rate of their offspring was significantly reduced (Figure 1 left). To confirm this observation, RAGE-KO baby mice were replaced with wild-type baby mice. We found that the survival rate of the wild-type baby mice nurtured by homozygous RAGE-KO mother mice was significantly lower than those nurtured by wild-type mother mice (Figure 1 right). Such abnormal maternal nurturing behaviors of mother mice were observed with oxytocin KO mice, oxytocin receptor KO mice and CD38-KO mice, which show a reduction in oxytocin secretion (Takayanagi Y. et al. PNAS 2005, Jin D. et al. Nature 2007). Thus it was hypothesized that RAGE-KO mother mice should show an abnormality in maternal nurturing behaviors in which oxytocin is involved.

The research team investigated directly the binding of synthetic oxytocin to purified recombinant human and mouse RAGE proteins using surface plasmon resonance and plate assays. It was confirmed that oxytocin bound to two (V domain and C1 domain) of three immunoglobulin-like domains (from the N-terminus, V, C1 and C2) of the extracellular part of the RAGE protein. Next, oxytocin transport through the BBB was assessed using a BBB transport assay kit (MBT-24H, PharmaCo-Cell) in vitro, which consists of capillary vascular units constructed with primary cultures of monkey brain capillary endothelial cells coupled with rat pericytes and astrocytes. RAGE expression in the capillary endothelial cells used in this experiment was confirmed and RAGE-dependence was assessed by a knockdown experiment using RAGE shRNA vector (pSilencer 3.0-H1 vector (Ambion)) that inhibits RAGE expression and its control vector. By employing transendothelial electrical resistance (TEER), which reflects the Na ion flow through cell layers, as an index, the tightness of the BBB was confirmed throughout the experiment. This experiment indicated that oxytocin transport to the brain side chamber was detected only when oxytocin was added to the blood side chamber, whereas brain-to-blood oxytocin transport was not detected at all. Apparent permeability of oxytocin was RAGE dependent, around 3.0 x 10-6 cm/s, which is the same order of permeability of drugs that can barely enter the brain. It was considered that for transport, activation of the intracellular RAGE signaling system was not necessary. 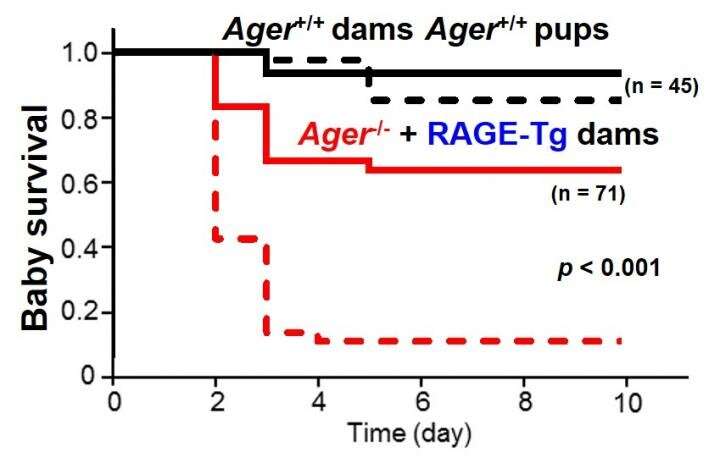 These results suggested that RAGE bound oxytocin and mediated oxytocin transfer through the BBB and its transport to the central nervous system. RAGE expression on capillary endothelial cells in the mouse brain was confirmed (Figure 2). Then, oxytocin transport to the brain was confirmed by administering synthetic oxytocin (with natural isotopes or with 13C and 15N) to mice by subcutaneous injection, intravenous injection and intranasally. The time course indicated that in RAGE-KO mice, transport was detected neither to the cerebrospinal fluid nor to the brain, contrary to the results with wild-type mice. When rescue experiments for nurturing behaviors were performed by adding RAGE back into the capillary endothelial cells of RAGE-KO mother mice showing abnormal nuturing behaviors, the survival rate of baby mice was significantly augmented (Figure 3). For confirmation, oxytocin transport to the brain was assessed and revealed that oxytocin was transported into the brain in RAGE-KO mice that had had RAGE re-added into their capillary endothelial cells.