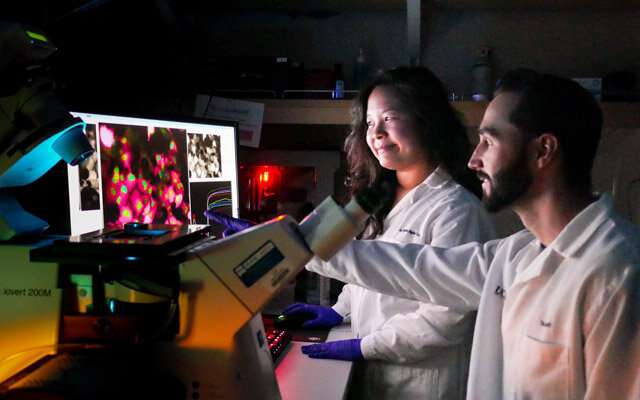 Protein Kinase C (PKC) enzymes are crucial for a number of cellular activities, including cell survival, proliferation and migration—functions that must be carefully controlled lest cells get out of control and form a tumor. Researchers at University of California San Diego School of Medicine found that another enzyme, called PHLPP1, acts as a “proofreader” to keep careful tabs on PKC. In pancreatic cancer, they discovered that high PHLPP1 levels lead to low PKC levels, which is associated with poor patient survival.

The study, publishing March 20, 2019 in Molecular Cell, sets the stage for clinicians to one day use a pancreatic cancer patient’s PHLPP1/PKC levels as a predictor for prognosis, and for researchers to develop new therapeutic drugs that inhibit PHLPP1 and boost PKC as a means to treat the disease.

The study was led by Alexandra Newton, Ph.D., professor in the Department of Pharmacology at UC San Diego School of Medicine, and Timothy Baffi, a graduate student in her lab.

In 2015, Newton’s team reversed a 30-year paradigm when they reported evidence that PKC actually suppresses, rather than promotes, tumors. For decades before this revelation, many researchers had attempted to develop drugs that inhibit PKC as a means to treat cancer. Their study implied that anti-cancer drugs would actually need to do the opposite—boost PKC activity.

Newton and Baffi’s latest study takes the investigation a step further by uncovering how cells regulate PKC activity. They discovered that any time an over-active PKC is inadvertently produced, the PHLPP1 “proofreader” tags it for destruction.

“That means the amount of PHLPP1 in your cells determines your amount of PKC,” Newton said. “And it turns out those enzyme levels are especially important in pancreatic cancer.”

The researchers collaborated with Gordon Mills, Ph.D., at OHSU Knight Cancer Institute to analyze a database of tumor protein data that also includes the patient information associated with each tumor. Among the 105 pancreatic tumors included in the database, those with high levels of the proofreading enzyme PHLPP1 had low levels of PKC.

While still in the earliest stages, Newton hopes this information might one day aid pancreatic diagnostics and treatment.

“If we could test a patient with pancreatic cancer and know that they have high PHLPP1 and low PKC, we’d know that the prognosis is not good,” Newton said. “And perhaps we could inhibit their PHLPP1, restore PKC activity and ultimately improve their chances of survival.”