Women should do no more than an hour of exercise a day if they want to live to age 90 (but there is no time limit for men!)

Women should do no more than an hour of exercise a day in retirement if they want to live to a ripe old age, research suggests.

But for men the more activity they do, the better.

Researchers tracked nearly 8,000 men and women from their late 60s, monitoring how much physical activity they did over the next 22 years or so.

The scientists, writing in the BMJ Journal of Epidemiology & Community Health, said the more activity men did, the more likely they were to live to the age of 90.

But for women the benefits peaked at about an hour a day and then started dropping again, suggesting exercise has a maximum benefit before it starts to do harm. 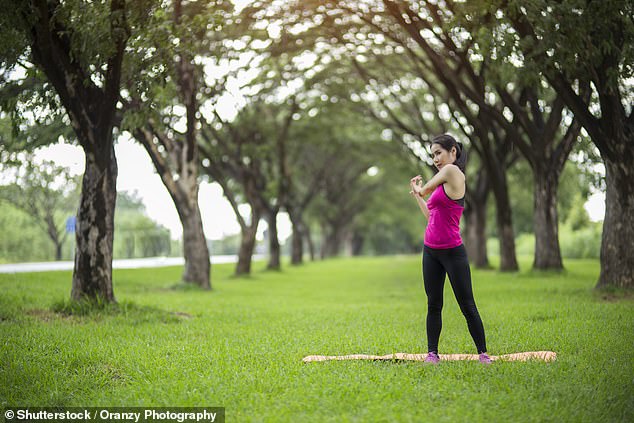 Researchers analysed data from 8,000 men and women to make the conclusion. The findings were published in the Journal of Epidemiology and Community Health

The scientists included moderate exercise, such as gardening, dog walking, DIY, walking or cycling to work, and team sports.

But the scientists, from Maastricht University Medical Centre in the Netherlands, found exercise had a big impact on the chance of surviving to the milestone birthday.

Women who did 30 to 60 minutes of exercise a day were 21 per cent more likely to survive to the age of 90 than if they did less than half an hour.

Above 60 minutes a day, the odds of living to 90 plateaued and then fell.

Men who performed more than half an hour of exercise a day were 34 per cent more likely to reach the age of 90.

HOW MANY CALORIES DO I NEED EACH DAY?

The basic amount of calories an average adult needs per day is 2,000kcal for women or 2,500kcal for men.

This is based on the amount of energy the body needs to carry out basic functions and to walk and work throughout the day.

People who exercise a lot need to eat more calories to fuel their efforts, and young people and children burn more energy, too.

If you eat more calories than you burn in a day, you will get fatter.

Eating fewer calories than you burn will make you lose weight.

Foods which are processed and have high levels of carbohydrate, sugar and salt have higher calorie numbers than fresh fruit and vegetables.

But for those who did more than 90 minutes a day, the chance of surviving went up 39 per cent.

The researchers said: ‘While physical activity is linked to longer lifespans in both sexes, it seems the more time men spend physically active every day, the better it is for their chances of reaching old age, whereas 60 minutes a day was associated with the best chance for women, the findings indicate.

‘Average life expectancy has risen over the past few decades, but has recently started to plateau in some developed nations, with increasing levels of obesity and physical inactivity thought to be behind the trend.’

The researchers are not exactly sure why there is a gender difference in the impact of exercise on longevity – but it could be influenced by factors such as hormones, childbirth, genes and lifestyle.

The scientists also found that women who were tall and slim had a greater chance of living to the age of 90 – but height and weight had no impact on men’s survival.

Women who were more than 5 feet 9 inches in height were 31 per cent more likely to reach 90 than women less than 5 feet 3 inches.

NHS advice currently recommends all adults people get at least 150 minutes of moderate activity a week – including swimming, cycling or brisk walking.

And it says exercise should come in bouts of at least 10 minutes a time to allow the heart rate to build up.

But experts are worried elderly people find this target too daunting.

They fear that instead of doing what exercise they can, many pensioners admit defeat and sit on the sofa instead.

Previous research published last year in the British Journal of Sports Medicine, found only 16 per cent of British pensioners in their 70s and 80s manage to hit the official NHS moderate exercise target.