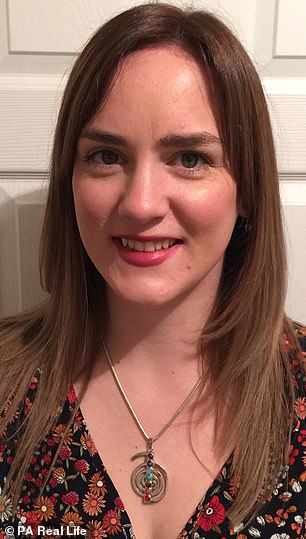 Kirsty James, 29, questioned her own sanity when she started having terrifying hallucinations in 2010

A woman who feared she was going insane after having terrifying hallucinations was actually losing her sight due to an eye condition.

Kirsty James, 29, questioned her own sanity when she began seeing strangers in her living room and imaginary cars parked outside her house.

But the charity worker suffered in silence as she feared people would think she was ‘mad’.

Mrs James, from Caerphilly in Monmouthshire, South Wales, ‘cried with relief’ when she discovered the hallucinations were caused by Charles Bonnet syndrome (CBS), which she developed because of her Stargardt disease.

Mrs James had been diagnosed with Stargardt – a genetic eye condition which affects the central part of the retina – aged 13.

Doctors warned her from an early age that she would eventually go blind, but she never connected her hallucinations with her failing sight.

It wasn’t until 2011 that Mrs James was diagnosed with CBS – which is common among people who are losing their sight.

CBS causes people who’ve lost part of their vision to see things that aren’t really there – medically known as having a hallucination.

It occurs in people who have lost over 60 per cent of their eyesight from a range of problems such as Stargardt, cancer, a stroke, diabetes or an injury.

The main cause of CBS appears to be the brain trying to piece together what it’s seeing as a result of the loss of vision.

Mrs James said: ‘I felt really insecure and embarrassed. I’d always been an independent person, a free spirit who loved socialising – but suddenly, I didn’t even know how to talk about what was happening to me.

‘I remember looking out one night and seeing loads and loads of cars. I thought it was strange, but I didn’t have anyone to confirm it with.

‘Then, a few weeks later, I was in my living room when I suddenly saw a figure standing there. I shouted, “Hello?” but as quick as it had appeared, it was gone.’ 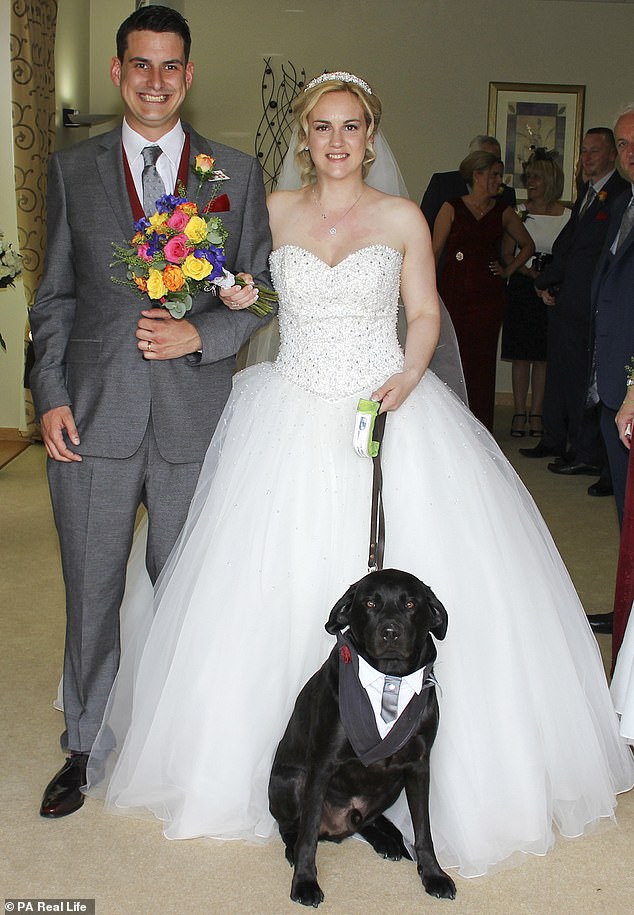 It wasn’t until 2011 – when she met her husband Tom that she was diagnosed with CBS. Pictured: Mrs James with her Black Labrador guide dog Bass on her wedding day

She added: ‘When the hallucinations started… I genuinely thought I was going mad. But then, on hearing I actually had CBS, I burst into tears.

‘I was so relieved that it wasn’t my mental health, it was my sight.’

Stargardt disease is an inherited eye condition that affects the macula – a tiny part of the retina, the light sensitive film at the back of the eye.

It causes a reduction in central, or detailed, vision – that which is used when looking directly at something.

In Charles Bonnet syndrome, a person whose vision has started to deteriorate sees things that aren’t real.

The hallucinations may be simple patterns, or detailed images of events, people or places.

They’re only visual and don’t involve hearing things or any other sensations.

It’s important to be aware that hallucinations associated with Charles Bonnet syndrome are caused by failing eyesight.

They’re not caused by a mental health problem or dementia.

Charles Bonnet syndrome affects people who’ve lost most or all of their eyesight. It’s more likely to occur if vision loss affects both eyes.

The macula is crucial for sight and is responsible for what you see straight in front of you and your ability to appreciate colour.

Those who have had the condition for a number of years may have a blank patch in the centre of their vision.

Able to see perfectly until her teens, Mrs James said she first experienced symptoms in school in September 2003.

The then-13-year-old said she struggled to read the blackboard properly. But the condition went undiagnosed at an optician appointment.

From there her vision deteriorated rapidly and within months she struggled to recognise family members in the street.

She said: ‘It all came to a head one day when I was in town getting lunch on my break at school, and my mum walked past – only I completely ignored her.

‘She thought I was being a typical teenager, but it wasn’t that at all. I genuinely didn’t recognise her.

‘The only way I can describe my vision by that point is that I could make out shapes, but none of the detail – like when you’re driving and can see a sign coming up, but can’t read what it says.

‘So, I knew a woman had walked past, but couldn’t see her face well enough to know it was mum.’

Returning to the optician, Mrs James was referred to a specialist eye clinic for a string of tests, leading to her diagnosis of Stargardt.

‘It’s so rare that you’d never spot it unless you knew what you were looking for,’ she added.

‘After my diagnosis, my family were determined for me to still be proactive and not let it change me. 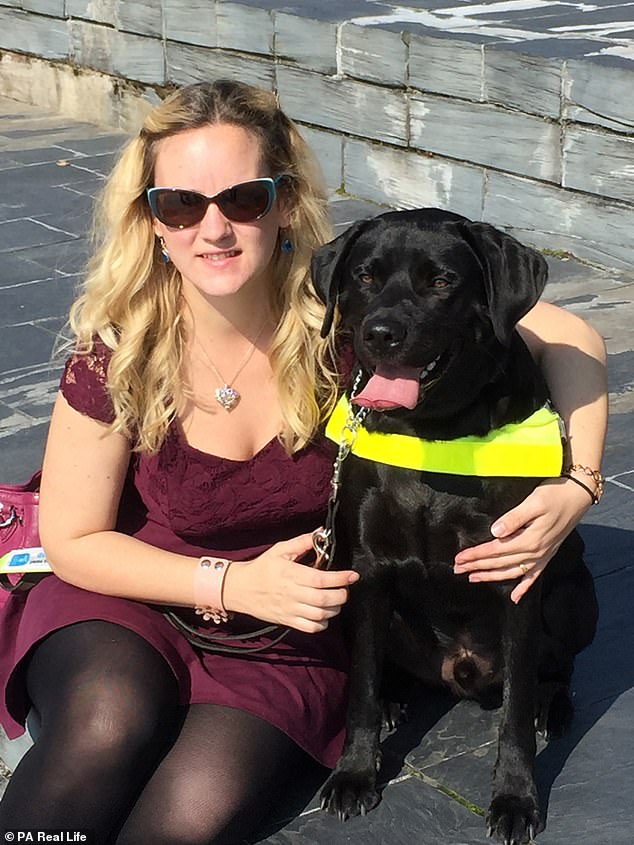 WHAT IS STARGARDT DISEASE?

The inherited eye condition affects the macula – a tiny part of the retina, the light sensitive film at the back of the eye.

It causes a reduction in central, or detailed, vision – that which is used when looking directly at something.

The macula is crucial for sight and is responsible for: what you see straight in front of you, the vision you need for detailed activities such as reading and writing – and your ability to appreciate colour.

Stargardt disease, thought to affect around one in 9,000 people, is sometimes called a juvenile macular dystrophy as it can first appear between the ages of 10 to 20.

At first, it makes vision unclear and then sometimes distorted or blurred.

Sufferers may have problems with central, detailed vision and possibly colour perception.

Those who have had the condition for a number of years may have a blank patch in the centre of their vision. This patch will not move and will always be in the very centre of the field of vision.

The good news is that Stargardt disease does not usually affect other parts of the retina – so does not affect peripheral or side vision.

Since we use peripheral vision when we are moving around, most people with Stargardt disease manage to keep getting out and about on their own.

It would seem that some people with fundus flavimaculatus can develop more severe sight problems than people with more classic forms of Stargardt disease.

‘I tried my best to be positive, but inside I was terrified. I had no idea what would happen, or if I’d end up completely blind.’

Mrs James’ sight continued to weaken in the years that followed but, keen to maintain her independence, she left home aged 16 to live on her own.

Frightened people would think she was ‘mad’, she kept her symptoms to herself until she met her husband Tom, 34, in 2011.

Shortly after meeting Tom she completely lost her central vision – something she had been dreading since her Stargardt diagnosis.

‘I had been struggling more and more, and finding I couldn’t do as much alone as I once had,’ she said.

‘I’d go shopping and swear I’d bought something, only to come home and realise I’d either misread or hallucinated the label and it was something completely different.

‘Then, when I was with Tom, I remember waking up one morning, looking out of my window and stopping cold.

‘I suddenly realised I could no longer see the church door across the street that I used to look at all the time.

‘My central sight had finally fully gone. I knew then it was time to accept I needed help – but that in itself was so hard. My life had changed virtually overnight.

‘But Tom was incredible. He didn’t try to fix the problem – he just listened.’

She went to see a specialist after losing her central vision and was referred to an optician to be fitted for magnifying glasses.

During her appointment, CBS was mentioned for the first time. She said: ‘I was doing the test where they make you read a board and, suddenly, the optician asked if I had heard of CBS, saying he thought I may have it.

‘I asked why and he said, “What you’ve just read is completely different to what the board says”.

‘I then told him about the hallucinations, and it was clear I had CBS. I cried with relief – I genuinely thought I had been going mad.’ 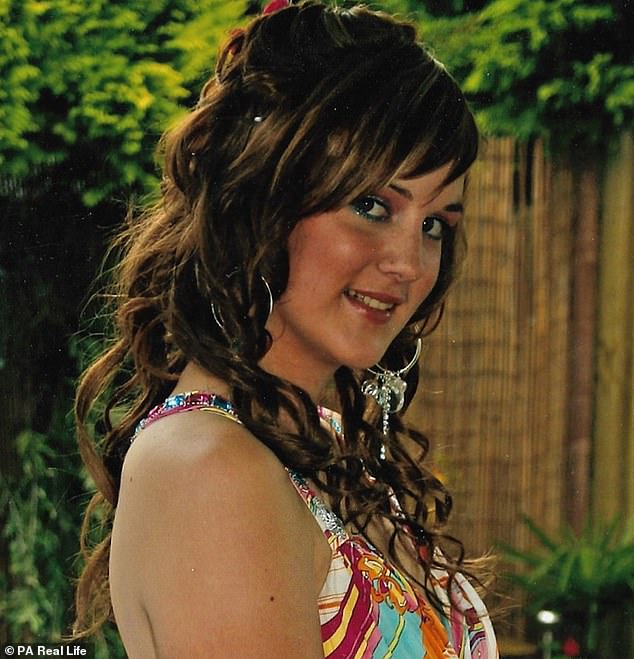 Mrs James had been diagnosed with Stargardt – a genetic eye condition which dramatically reduces sight in the central part of the retina – aged 13. CBS is the brain’s reaction to a loss of sight

According to Esme’s Umbrella, a campaign group working toward greater awareness of CBS, hallucinations are sharp and clear, and range from patterns and people to animals, water, fire and even gremlin-like creatures.

Mrs James added: ‘To me, it’s almost like my brain can’t quite figure out what it’s supposed to be seeing, so it fires off random images to find one that fits.

‘Out of my two conditions, CBS is by far the most difficult to live with. I struggle especially with faces.

‘I can’t distinguish if someone is male or female until they talk and I’ll even sometimes hallucinate the faces of people I used to know when talking to someone new. 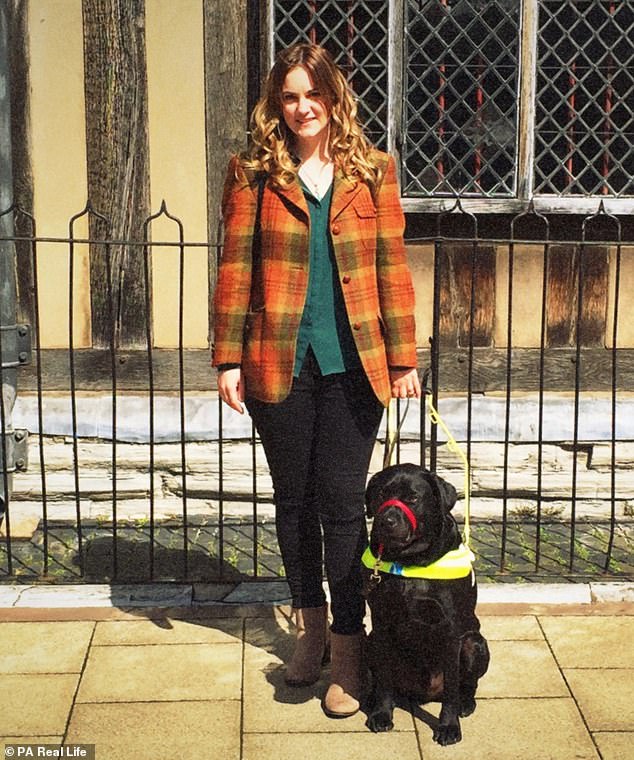 ‘I can also see things like cars and lorries that aren’t there, or the floor will look almost watery.’

She said: ‘The visions can change too, especially if I’m seeing something that wouldn’t ordinarily be there.

‘For example, my friend brought a big speaker over the other day and put it in my living room, but, because my brain couldn’t recognise what it was, it was switching between things like a lawnmower, then a huge box.’

Now, Mrs James is determined to raise awareness of CBS and works alongside both the RNIB and Esme’s Umbrella.

She said: ‘My main drive is to help others. To anybody out there experiencing these hallucinations – don’t suffer in silence. Talking helps rationalise it and there is support out there. 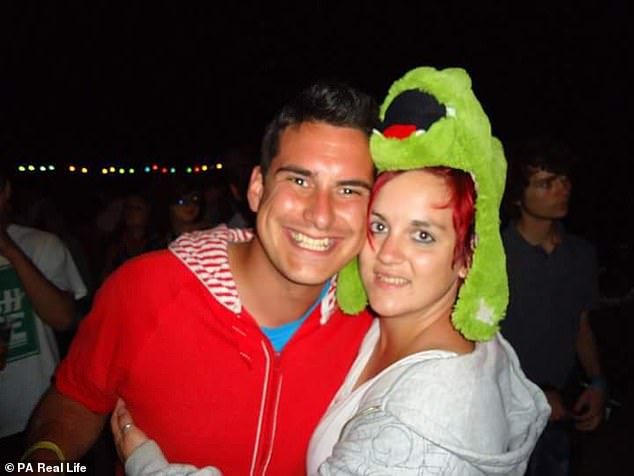 ‘Dealing with this has been incredibly difficult. There have been times where I’ve been housebound with depression and anxiety, questioning how resilient one person can be, and how much they can take.

‘But I know I had to hit rock bottom to come back up, and almost get through that grieving process, because of my failing sight, so I could keep going and help others.’

RNIB’s sight loss experts can provide practical and emotional support, whether it’s on the phone, face-to-face at many hospital eye clinics, or through our online information. Contact the RNIB Sight Loss Advice Service on 0303 123 9999 or visit www.rnib.org.uk/advice for more information

1. Reach out towards the hallucination, try and touch it or sweep your hand to brush away the image.

2. Shine a torch upwards from below your chin in front of your eyes (not into the eyes).

3. If sitting, try standing up and walking around the room. If standing, try sitting.

4. Walk into another room or another part of the room.

5. Turn your head slowly to one side and then the other. Dip your head to each shoulder in turn.

6. Stare straight at the hallucination.

7. Change whatever it is you are doing at that moment – turn off/turn on the television/radio/music.

8. Change the light level in the room. It might be the dim light that is causing the hallucinations. If so, turn on a brighter light – or vice versa.

9. Blink your eyes once or twice, slowly.