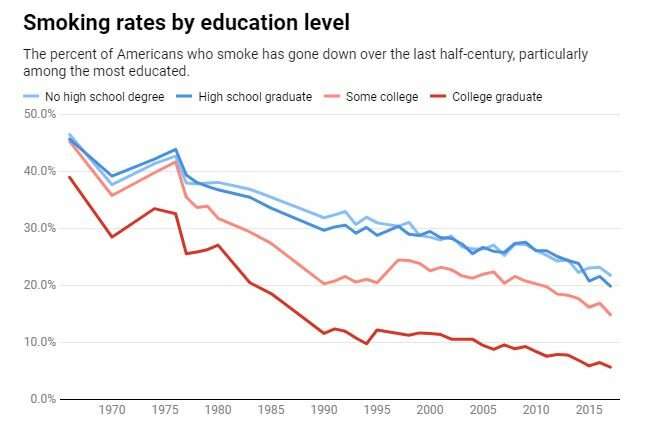 Suppose you were told that there is something responsible for nearly 1 of every 5 deaths of Americans, and that it is completely avoidable. Would you believe – today – that “something” is cigarette smoking?

If you’re a college graduate, you might not believe it. You don’t smoke. Your friends and colleagues don’t smoke. You never see smoke in your workplace, nor in the restaurants and bars you frequent. Like many of the nation’s most educated citizens, you may well regard the problem of smoking as largely solved. Because the educated population is also the most politically engaged, cigarette smoking has virtually disappeared from the nation’s health policy agenda.

I’m not a smoker, although like many of you I was one (45 years ago, in my case). As a student of tobacco policy for over 40 years, I have helped to document the remarkable progress we have made against smoking. But I also appreciate why smoking remains our nation’s most avoidable cause of disability and premature death. The lack of policy attention to smoking is a public health tragedy.

The good news and the bad news

No one can deny the extraordinary victories against smoking. Since the 1964 Surgeon General’s report on smoking and health, adult smoking prevalence has dropped by two-thirds, from 43 percent to 14 percent.

The decrease among young people has been even more substantial. For example, since smoking peaked among high school seniors 20 years ago, smoking prevalence in the past 30 days has plummeted by nearly 80 percent.

Prompted by tobacco control initiatives, Americans’ decisions to quit smoking and not to start in the first place avoided 8 million premature deaths from 1964 to 2012. The Centers for Disease Control and Prevention considers tobacco control one of the 10 greatest public health achievements of the 20th century and of the first decade of the 21st.

That’s the good news. The bad news is that 1 of every 7 adults still smokes. And smoking kills nearly 500,000 Americans every year. That number exceeds – by a lot – the sum total of all deaths caused by the opioids and other drugs, alcohol, motor vehicle injuries, homicide, suicide, HIV/AIDS and fires.

Who smokes now? The role of education

What accounts for the divergence between common perceptions about smoking and the dismal reality? In large part it is remarkable changes in who is smoking. Increasingly, today’s smokers are those with lower education, lower income and—importantly—a higher incidence of mental illness.

For college grads, the rate of smoking in 2017 was vanishingly small. For those without a high school degree, and indeed for high school grads too, fully 1 out of 5 remain smokers. The difference matters. Research attributes a fifth to a third of a large education-related gap in life expectancy to differences in smoking.

There is an enormous difference in life expectancies between the nation’s richest and poorest citizens. Smoking is again a significant factor in this disparity.

Mental health does, too

An enormously important factor in smoking today is that the smoking prevalence of people suffering from serious mental illness is more than double that of the population not so afflicted (28 percent and 13 percent, respectively, in 2014). People with mental health problems or substance use disorders constitute a quarter of the U.S. population but consume 40 percent of all cigarettes smoked. They have more difficulty quitting smoking.

Rates differ by mental illness condition. In 2007, nearly 60 percent of schizophrenics smoked. That was three times the rate of the general population. Smokers with serious psychological distress (SPD) lose 15 years of life expectancy. Nonsmoking victims of SPD lose five years. Research has thus attributed up to two-thirds of the life expectancy reduction of SPD victims who smoke to their consumption of cigarettes.

Smoking also disproportionately afflicts members of the LGBT community. Among racial/ethnic groups, American Indians and Alaskan Natives had the highest smoking rates in 2016, while Asian Americans and Pacific Islanders had the lowest.

As these data indicate, the principal victims of smoking are members of marginalized populations. Despite the enormous continuing importance of smoking in U.S. health, the issue is submerged. Smoking no longer afflicts the nation’s most economically advantaged population, and those it does burden lack an effective voice in the nation’s political life. 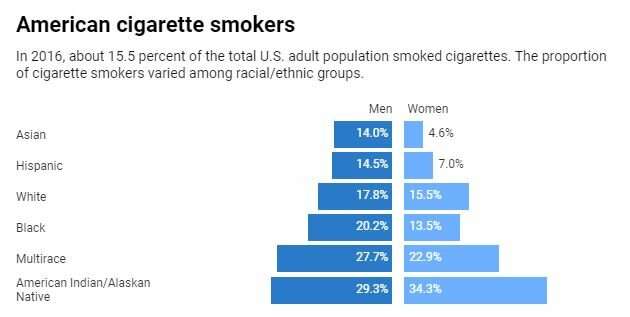 Besides, smokers tend to blame themselves for the behavior.

In point of fact, smoking is a tenacious addiction, one that the vast majority of smokers acquired in their youth. They were assisted in so doing by an avaricious tobacco industry that marketed aggressively to young people. Kids have been referred to as “replacement smokers,” the new smokers needed to replenish the industry’s customer base as its most loyal customers succumb to smoking-produced diseases.

What can be done? The simple – and incomplete – answer is “more of the same.” Public education has contributed to decreased smoking, as have policy interventions: cigarette taxation, smoke-free workplace laws, prohibitions on product advertising and promotion, and media anti-smoking campaigns. Evidence-based smoking cessation treatments can help as well. Interventions increasingly need to be targeted to specific high-risk groups.

These evidence-based measures are unlikely to be enough, however. A potentially complementary tool may lie in a highly controversial recent development: the emergence of e-cigarettes. Novel reduced-risk nicotine delivery products like e-cigarettes may serve as alternatives to smoking, especially for those smokers otherwise incapable of quitting cigarettes.

Vaping may hold the potential to help significant numbers of Americans to quit smoking. The risks of vaping are clearly substantially less than those of smoking. At the same time, however, there are concerns about the attraction of e-cigarettes to young people and uncertainty about the health effects of long-term vaping.

While the ultimate impacts of e-cigarettes and other novel non-combusted tobacco products remain to be seen, there is widespread agreement that it is the burning of tobacco – primarily in the form of cigarette smoking, with its 7,000 chemicals – that is by far the most deadly method of consuming tobacco.