Vitamin D is a nutrient the body creates from direct sunlight on the skin when outdoors. Although most people people should be able to get all the vitamin D they need from about late March/early April to the end of September, between October and early March, people don’t get enough vitamin D from sunlight. A vitamin D deficiency can lead to bone deformities such as rickets in children, and bone pain caused by a condition called osteomalacia in adults. It may come as a surprise that it may also cause fatigue.

Case studies have revealed that very low blood levels can cause fatigue.

In one case, a woman who complained of chronic daytime fatigue and headaches was found to have a vitamin D blood level of only 5.9 ng/ml.

This is extremely low, as anything under 20 ng/ml is considered deficient.

Further supporting the link, when the woman took a vitamin D supplement, her level increased to 39 ng/ml and her symptoms resolved.

Another large observational study in female nurses looked at the relationship between vitamin D and fatigue in young women. 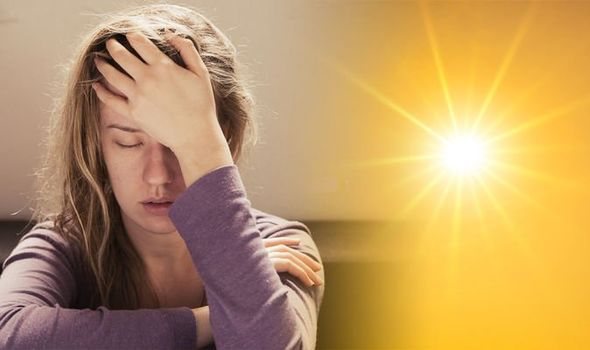 The researchers found that 89 per cent of the nurses were deficient.

In one analysis, 65 per cent of the observational studies found a relationship between low blood levels and depression.

Further bolstering the link, some controlled studies have shown that giving vitamin D to people who are deficient helps improve depression, including seasonal depression that occurs during the colder months.

Who is at risk of a vitamin D deficiency?

Some people won’t get enough vitamin D from sunlight because they have very little or no sunshine exposure.

The Department of Health recommends that a person takes a daily supplement containing 10 micrograms of vitamin D throughout the year if they:

If they have dark skin – for example if they have an African, African-Caribbean or south Asian background – they may also not get enough vitamin D from sunlight, explained the health body.

The NHS warns against taking too many vitamin D supplements, however.

As the health body explained: “Taking too many vitamin D supplements over a long period of time can cause too much calcium to build up in the body (hypercalcaemia).

“This can weaken the bones and damage the kidneys and the heart.”

If a person chooses to take vitamin D supplements, 10 micrograms a day will be enough for most people, advised the health site.

People can also top up in the vitamin in their diet in the winter months.

Foods rich in vitamin D include: