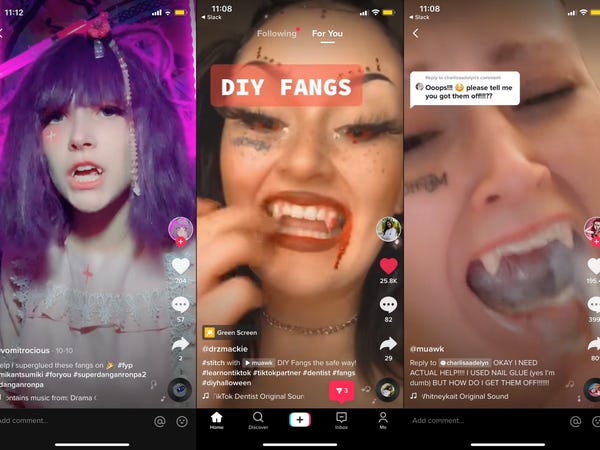 As if using a nail file on your teeth wasn't bad enough, TikTok users are now using nail adhesive, made up of the same ingredients as super glue, to secure their vampire fangs in for Halloween. The problem is they can't get them out.

Videos of young people panicking as they struggle to yank out their fake fangs to no avail are circulating on the popular video platform in honor of spooky season.

Dentists are replying to the clips on TikTok and telling those with fangs stuck to their teeth exactly what to do when the worst-case scenario occurs.

Don't yank. You can pull out your teeth or cause some serious damage.

A number of the videos show people struggling to pull out their fangs after brushing furiously. According to dentists, while your first instinct may be to pull, you should refrain from doing this and seek dental attention immediately.

If you yank on your teeth, you could end up damaging your enamel, fracturing a tooth, or pulling them out completely.

Instead, if you can't get to a dentist immediately (sometimes these makeup tutorials take place at night when people are bored) you should wait for the fangs to fall off and gently go about brushing your teeth and rinsing your mouth with water as you normally would.

"Call a dentist for safe removal," Dr. Julie Davis, a dentist in Chicago, said in a TikTok response."Be really careful until they fall off or a dentist removes them."

Nail glue is poisonous. If you want the fangs to stay, opt for denture glue.

Many users stated they used the nail adhesive in the packet of the fake acrylic nails they were using as fangs because they wanted them to stay in place.

Because superglue of any kind is poisonous and not intended for use inside your mouth, a safe alternative would be denture glue.

"Don't use nail glue, it's poisonous and won't come off," Dr. Z. Mackie, a Detroit-based dentist on TikTok, said in a video. "If you're using acrylic nails as your fangs use a denture glue. It's going to be safe and easy to take off. You can also use ortho wax. This is not gonna stay on the whole time but it's safe and good for pictures."

TikTok users are shaving down their teeth with nail files. Dentists say it could cause permanent damage.