The Lancet's Commission on Obesity has called for a binding plan and trillions of dollars to thwart the dangers of unsustainable agricultural production, transport, urban design and land use.

The commission's stark message comes a week after the EAT-Lancet Commission warned humans must radically change their diets to avert catastrophic damage to the planet. 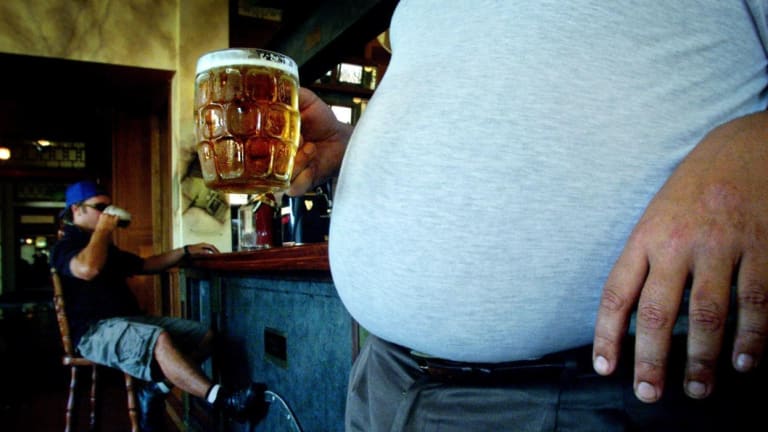 Almost two in three Australian adults and one in four children are overweight or obese, Credit:Simone De Peak

A $1 billion fund and action strategies targeting food policy and production are needed urgently to support health, the environment and economic wellbeing, according to the report published on Monday.

The consortium of 43 world-leading experts in agriculture, economics, human rights and other fields said the interplay of obesity, undernutrition and climate change will take an enormous toll on humanity.

"What we're doing now is unsustainable," said William Dietz, an author of the study and public health expert at George Washington University.

"The only thing we can hope is that a sense of urgency will permeate," he said on a conference call with reporters. "We're running out of time."

Some four million deaths each year are linked to obesity and some 815 million people are chronically undernourished, the commission said.

Malnutrition, be it undernutrition or obesity, was by far the biggest cause of ill-health and premature death globally, said Lancet Obesity Commissioner Professor Steven Allender, director of the Global Obesity Centre in Deakin's Institute for Health Transformation.

Almost two in three Australian adults and one in four children are overweight or obese, according to the latest Australian Institute of Health and Welfare data.

He said obesity, undernutrition and climate change had for too long been viewed as separate. Not only do they share many key drivers, their outcomes interact.

"Food systems not only drive the obesity and undernutrition pandemic but also generate more than a quarter of global greenhouse gas emissions, with cattle production accounting for more than half of these emissions.

Climate change's extreme weather events, droughts, and shifts in agriculture will drive up rates of undernutrition by increasingly threatening food security, he said.

Agricultural production and distribution burns fossil fuels that contribute to rising global temperatures, drought, and extreme weather, according to the Lancet report.

The problems are exacerbated by inaction by policymakers, influence by profit-seeking food companies over public policy and a lack of demand for change by the public, it read.

The soft drink industry in Australia and globally has lobbied politicians to block or water down so-called sugar taxes on soft drinks.

Professor Allender said economic incentives needed to be overhauled and the roughly $7 trillion of dollars in government subsidies to fossil fuel and billions in subsidies to beef, dairy and other large agricultural businesses globally should be redirected towards environmentally sustainable systems.

The commission said a binding international agreement, similar to that reached on global warming in 2015 and tobacco control, was needed to address and improve food systems.

The establishment of such a framework would restrict the influence of the food industry on policy and mobilise action for healthy, equitable and sustainable systems.

Three years ago, nearly 200 nations met in Paris to agree on a pact, aspects of which are legally binding, to cut greenhouse gas emissions to combat global warming.