"Why aren't there any willies in here, Mum?" Ah, yes. You can always depend on a preschooler to get straight to the point. At five years old, my son is just young enough to still be allowed entry to the nearby women's ocean pool and to get away with asking a question like that in a room full of half-undressed women. It's a good question. And a fair one. After all, this place is unique in that sense.

Nestled into the rocks, with the wide Pacific lapping at its walls, the pool glistens and ripples before us as we stroll down the path toward it. 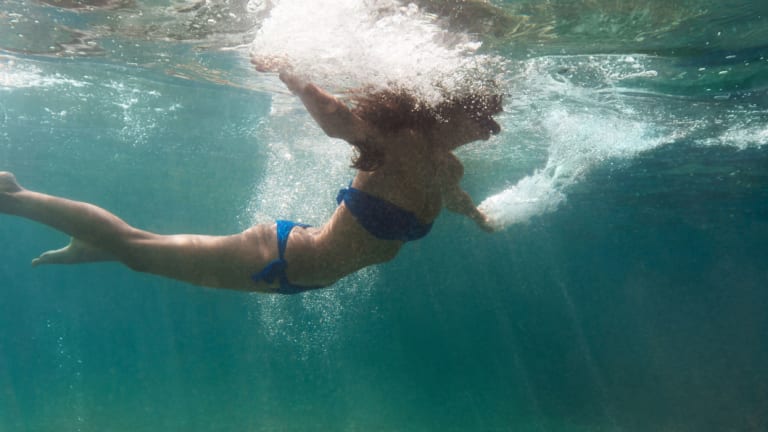 On this warm, easy day, the array of bodies and ages and ethnicities at my beloved women’s baths is a sight to behold.Credit:Stocksy

On this warm, easy day, the array of bodies and ages and ethnicities at my beloved women's baths is a sight to behold: languid summer goddesses looking like mermaids just popped up from the ocean; elderly women who have been swimming here for decades; gaggles of hijab-wearing teenagers disrobing to their swimsuits and listening to Taylor Swift on their phones; women recovering from injury or trauma, moving gently through the healing water and the sunshine.

Then there are the tired but happy new mothers floating calmly with their tiny babies as the local army of blue crabs makes its cautious march around the surrounding rocks. And women like me, relishing the chance to escape and let go of the demand to look and behave in certain ways. Just for an hour. Ahhh …

It's easy to guess at some of the reasons these girls and women might choose the baths, to imagine what they might be retreating from, protecting themselves against, taking comfort in, or nurturing strength for.

My reason was pretty straightforward – I was weary of battling for lane space with large blokes at my local ocean pool. I was forever being overtaken with great thrashings of water as Kieren Perkins wannabes hurtled past me with windmilling arms, pounding legs and only centimetres to spare.

I had the back of my calves whacked by male swimmers surging up behind me before the last-minute manoeuvre, and ended up feeling like a small hatchback being tailgated, then overtaken, by a huge four-wheel-drive and left spluttering in its fumes.

I tried not to take it personally. They are just bigger and faster. But their supposedly innocent lack of awareness was galling given the way I, like many women, never stop being aware and accommodating of other people, and alert to not "getting in the way".

So one morning I ventured a few beaches further south to the women's baths and oh, what a gem of a place.

Not only is there not a tailgater in sight, entry is via an honour system, a gold coin thrown in a box – a small price to pay for this pocket paradise.

The roughly hewn ocean pool, with stairs leading down to two different entry points, is surrounded by an assortment of rock platforms and small grassed areas for general lolling about. There is also an outdoor shower among the nasturtiums, and a simple, clean dressing room with a million-dollar view of the bay through its wide, open window.

The bottom of the pool is irregular and there are no marked lanes but those of us swimming laps stroke up and down smoothly enough in a natural synchronicity. Non-lap-swimming women bob graciously from our path. It's all so civilised! And so peaceful. There are many shared smiles of the "can you believe how gorgeous this is and how lucky we are?" type.

I am lucky in many ways, of course. One of which, to borrow from Virginia Woolf, is that I am in possession of a room of my own in which to write. The women's baths – well, they seem like something equally precious – a pool of our own in which to drift.

Don't get me wrong. I love a good beach session as much as the next person, and that frisson that accompanies the proximity of one's barely clad body to other barely clad bodies, against a backdrop of sand and surf, can be one of life's great pleasures.

But being able to retreat from a state of hyper-awareness as to how I'm presenting my body, and how it's being perceived, is a huge relief. If a contented sigh could be manifested as a physical place, the women's baths would be it.

Only the pool's resident blue wren doesn't play by the rules as he flutters and flirts and pesters his jenny wrens in blatant disregard of the "women and children only" signs.

So back to my son's question. The simple answer is that there are no willies because there are no men allowed at the baths. My son's inevitable response to that is, of course, "But why?"

And as we walk back up the dappled path and out into the world, I take a deep breath. "Well," I begin…

This article appears in Sunday Life magazine within the Sun-Herald and the Sunday Age on sale January 20.