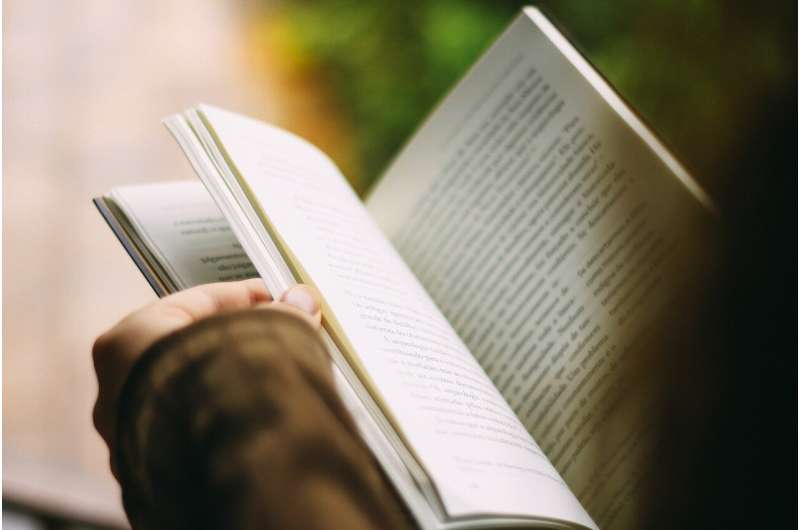 Humans read by ‘pre-processing’ written words to create a pipeline of meaning, according to new research at the University of Birmingham.

A study, published in Nature Communications, shows that each pre-processing judgment can take place extremely rapidly—within just 100ms after the eye lands on the previous word. The neuronal activity required to scan the next word in a sentence also increases according to the complexity of the word, the researchers found.

The insights gained by the research team, based in the University’s Centre for Human Brain Health, could help support diagnosis and training programs for people with certain types of dyslexia where the pre-processing of words is impaired.

The team has also used the principles highlighted in their study to propose a new theory for how humans perceive other, more general scenes as they observe and navigate the world around them.

In a second theoretical paper, published in Trends in Cognitive Neuroscience, the team suggests that humans do not necessarily perceive objects simply one after another (in series), and nor do they perceive items simultaneously (in parallel). Instead, they establish a pipeline of observations, in which meaning from one object is established while another region of the brain is simultaneously deciding which next item is important.

These processes are coordinated by alpha waves in the brain and they happen extremely rapidly, with the eye moving around 3-4 times every second.

Yali Pan, a co-author on both studies, said: “The speed at which the participants in our experiment were able to recognize the complexity of the next word in the sequence was really remarkable, and much faster than we predicted.”

In the experimental study, the team used a combination of eye tracking technology and measurements of magnetic fields in the brain to assess this activity. While eye tracking can be used to pinpoint how the eye moves and what object or word it fixates on, magnetoencephalography, or MEG, reveals what is going on ‘behind the scenes’ as the brain processes this information.

The researchers asked 39 participants aged between 18 and 35 to read a series of sentences on a screen. In each sentence, one word was ‘tagged’—it was programmed to flicker at a high frequency (60Hz). Although the participants could not detect this consciously, it was picked up by a specific region of their brain and detected by the MEG sensors.

By monitoring both MEG signals and eye tracking, the researchers were able to get a detailed picture of what the participants were fixating on different words in a text, and then how different regions of the brain processed that information.

Professor Ole Jensen, also a co-author, said: “Understanding how the brain decodes written information can help us develop more sophisticated diagnostic tools for conditions such as dyslexia. Our research has clearly shown that eye tracking and brain scanning must be studied together to get meaningful insights into these processes.”