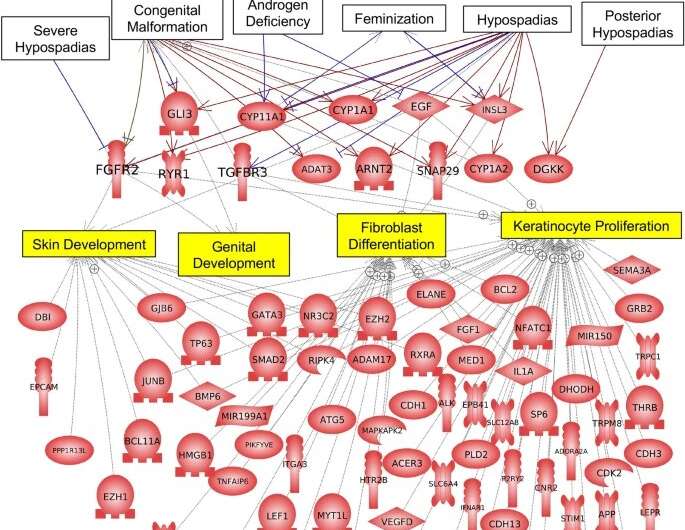 An alarming increase in the occurrence of the most common genital malformation in male babies, hypospadias, is likely due to environmental factors, such as toxicant exposure, which alter epigenetic programming in a forming penis.

That’s according to a new study in Scientific Reports that identified a direct link between hypospadia tissue samples and the presence of epigenetic alterations, or changes to the molecular factors and processes around DNA that determine how genes behave. Conversely, epigenetic alternations were not found in penile tissue samples taken from the foreskin of healthy babies without hypospadias, according to the Washington State University-led analysis.

The research helps answer long-standing questions surrounding the increased frequency and potential root cause of hypospadias, a birth defect in which the opening of the urethra is located on the underside of the penis instead of the tip.

“Previous researchers have done extensive analyses and not found any kind of genetic DNA sequence mutations that correlate with the presence of the disease, so there has always been a big question mark regarding where it comes from,” said Michael Skinner, corresponding senior author of the study and a WSU professor of biology. “Our study shows the etiology of the disease is environmentally driven through epigenetics rather than a result of changes to the DNA sequence. It gives us a clearer picture of what is going on.”

While the research is still in an early stage of development, it could ultimately lead to earlier detection and better clinical management of hypospadias, the prevalence of which has increased by 11.5% in recent decades, making it the most common genital malformation in newborn males.

One potential path forward would be to identify a specific epigenetic biomarker that could be collected with a simple cheek swab from the parents of a baby to determine the likelihood of the newborn developing a hypospadia.

“This is not so far-fetched,” Skinner said. “We have identified these types of biomarkers for other diseases. Early detection means they could do clinical management sooner which could result in fewer complications for the baby and more peace of mind for the parents.”

A major question that remains to be answered is specifically what environmental factors (i.e. toxicants) are promoting the epigenetic alterations that are causing hypospadias.

One potential culprit the researchers mentioned in the study is a pharmaceutical drug called diethylstilbestrol (DES) that was used in the late 50s and early 60s to ease the later stages of pregnancy for women.

“There was never really evidence that it helped with pregnancy, but after the fact, doctors started to find severe developmental effects from the drug on babies. Hypospadias were one of the issues,” Skinner said. “Unfortunately, because epigenetic changes caused by drugs like this and other environmental toxicants are epigenetically heritable, they are often passed down from one generation to the next after they are contracted. Over time, the detrimental effects can persist and spread.”

Another interesting finding from the study was that tissues samples with mild cases of hypospadias had a greater degree of epigenetic alterations than tissue samples with more severe versions of the disease.

“What this suggests is that cells with really severe epigenetic alterations are probably dying and not surviving whereas a mild case of hypospadia will have lots of these diseased cells still alive,” Skinner said. “This gives us new insights into how epigenetic control is affecting tissue development.”

This study was conducted in collaboration with researchers from the Departments of Pediatrics and Pediatric Urology at the Indiana University School of Medicine.