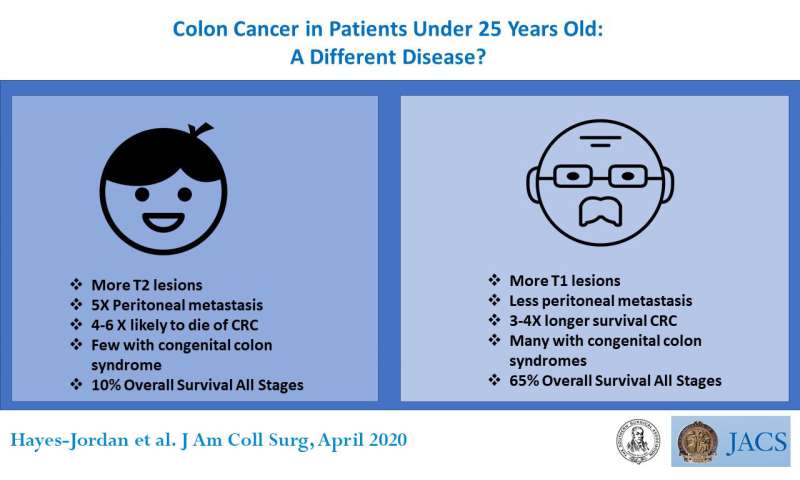 Colon cancer is more likely to be lethal in children and young adults than middle-aged adults. In a single-institution study, researchers at The University of Texas MD Anderson Cancer Center, Houston, Tex., found that differences in mortality rates persist regardless of whether pediatric, adolescent, and young adult patients (aged 24 and younger) were born with a predisposition for colon abnormalities or disease and for the first time conclude that young people are more likely to have metastases outside the colon, into the abdominal cavity, when they are diagnosed. Their findings put families, clinicians, and surgeons on alert to be sure abdominal complaints in young people are thoroughly and carefully evaluated when first reported, and aggressively treated if cancer is discovered. Study findings appears in an “article in press” on the Journal of the American College of Surgeons website in advance of print.

Colon cancer is rare in individuals under age 25. Prevalence of the disease in patients under age 20 is 0.2 percent. While the Surveillance, Epidemiology and End Results Program (SEER) estimates more than 145,000 new cases of colon cancer for 2019, only about 290 cases are expected in children and young adult people.

“Children with colon cancer can fall through the cracks. They may be seen by an oncologist who treats adults but who doesn’t know how to treat children. Or they may be seen by a pediatrician who knows all about treating children but nothing about colon cancer,” said Andrea Hayes-Jordan, MD, FACS, lead author of the paper, and Surgeon-in-Chief of the North Carolina Children’s Hospital, University of North Carolina, Chapel Hill. She was a professor and section chief of pediatric surgery at MD Anderson at the time the study was conducted.

The result is no clear path for treating children with colon cancer, other than providing the same treatment as adults. Furthermore, study findings clearly show that these types of interventions are not effective. “Stage for stage, children fare 5 to 6 times worse with treatment. So a child with Stage 4 disease has a 6 times higher chance of dying than an adult with the same stage of cancer,” Dr. Hayes-Jordan said.

Although some congenital abnormalities have been associated with colon cancer in young people, 71 percent of the patients in this study had no predisposing syndrome. This study also is the first to show that peritoneal (inside the abdomen but outside of the colon) metastasis is significantly higher (p=0.00001) in pediatric patients, the authors report.

“Although some may think the study raises more questions than it answers, it at least illuminates the problem so we can start working on it,” Dr. Hayes-Jordan said.

In fact, Dr. Hayes-Jordan will soon be co-leading a clinical trial that will gather tissue from adults and children with peritoneal disease and conduct genetic analyses to try to identify differences in tumors in children and investigate treatment alternatives that will benefit these patients.

Until more is known about pediatric colon cancer, Dr., Hayes-Jordan advises parents and clinicians to be vigilant. “Early symptoms, such as bloating, abdominal fullness, general abdominal discomfort need to be taken seriously. They need to be evaluated with computed tomography scans or other imaging technologies to identify the specific problem, and not dismissed as the stomach flu or a simple tummy ache after eating bad food,” she said.

Dr. Hayes-Jordan also recommends a surgical procedure up front and surgical excision that removes as much of the tumor as possible.