So just how long will your vaccine protect you from Covid? Some of the country’s leading experts answer the big questions about booster jabs

As the Government announces plans to introduce booster jabs for Covid-19 — making us the first country in the world to do so — Rachel Ellis asks some of the country’s leading experts to explain why boosters might be necessary.

What is a booster jab and why would I need one?

A booster jab increases the number of immune cells capable of producing antibodies to fight off the virus, explains Will Irving, a Professor of Virology at the University of Nottingham.

‘The first vaccine allows your immune system to ‘see’ the pathogen [the virus in this case] for the first time, which means the body can lay down memory cells containing information about it.’ The second Covid jab is not a booster, it’s part of the initial course of injections.

‘Anything subsequent to that is a booster,’ Professor Irving explains.

‘For some vaccines, the primary course may involve three jabs (hepatitis B, for example), or just one jab (as with MMR, given at 12-18 months). There are no hard and fast rules.’ 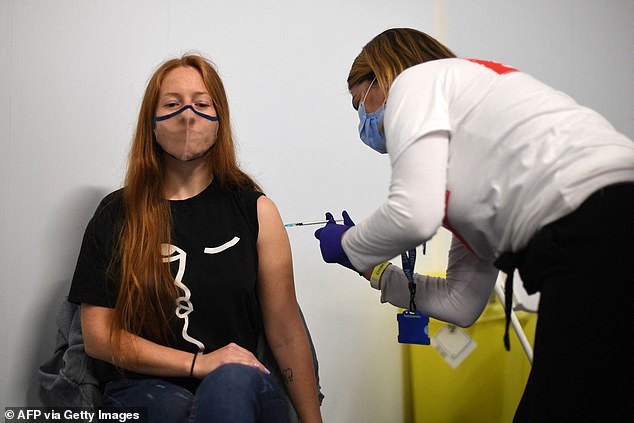 A booster jab increases the number of immune cells capable of producing antibodies to fight off the virus, explains Will Irving, a Professor of Virology at the University of Nottingham. A woman is seen being vaccinated in London

As to why you need a booster, he explains that the first vaccine often generates a slow, small response in the immune system because it is seeing something brand new, and this response will fade fairly quickly. The second dose generates a quicker, bigger and longer-lasting response from the immune system.

Crucially, though, Professor Irving says: ‘This, too, will fade over time, as the memory cells reach the end of their natural life, leaving the individual with less protection.

‘A booster jab stimulates the immune system again so that it makes more memory cells that produce antibodies.

‘Exactly how long it takes for antibody levels to drop after the first round of vaccination depends on many things, such as the pathogen and type of vaccine,’ he adds.

When it comes to Covid, scientists will only know how long the protection lasts by studying real people over time.

But I’ve heard that the vaccine can provide lifelong immunity

No vaccination provides 100 per cent protection from a disease, but research so far shows that Covid vaccines are very effective, preventing symptoms in more than 90 per cent of people who are fully vaccinated.

Furthermore, Public Health England data shows that both the Pfizer and AstraZeneca (AZ) vaccines are more than 90 per cent effective after two doses against hospitalisation with the Delta variant.

A study published last month in the New England Journal of Medicine suggested that the Moderna vaccine provides protection for at least six months.

Meanwhile, a study published in the journal Nature in May found that people who’d had mild cases of Covid-19 were still producing antibodies against the virus eight months later — and based on previous experience, this could continue for decades. 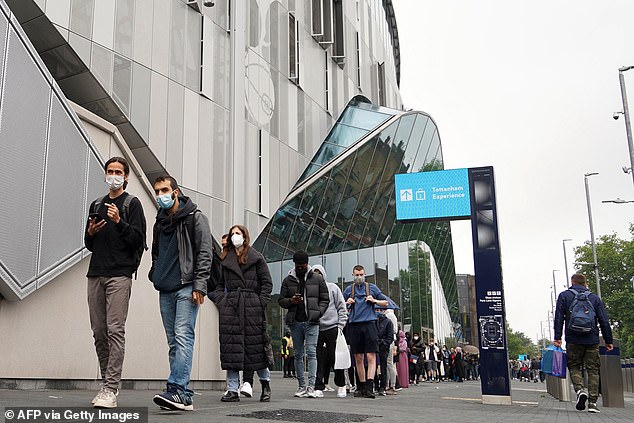 A study published last month in the New England Journal of Medicine suggested that the Moderna vaccine provides protection for at least six months. People are seen in a queue outside Tottenham Hotspur’s football stadium in London

But the effectiveness of any vaccine depends on many factors, including age. Our immune response declines as we get older, which is why flu and pneumonia vaccines, which are largely aimed at older people, contain adjuvants — compounds such as aluminium salts that boost the immune response.

The vaccine’s effectiveness can also be affected by conditions that weaken the immune system, including obesity.

Does it make any difference whether I had the Pfizer or AZ vaccine?

No, the same principle of fading protection over time applies to all vaccines.

When will I be offered a booster jab?

At the end of June, the Department of Health and Social Care announced that millions of people — those most vulnerable to Covid-19 — may be offered a booster jab from September.

Details will be announced in the next few weeks.

Who will get the booster jab?

The Government has said that the booster campaign will be ‘based on clinical need’. In the first phase, a booster jab will be given to the over-70s, those living in care homes, over-16s who are immuno-suppressed or clinically extremely vulnerable, and frontline health and social care staff.

The second tranche of booster jabs will include all over-50s.

As most younger adults will receive their second jab only this summer, the Government has said a booster campaign for them will be considered at a later time.

Do I really need a booster?

Studies suggest that people will be protected against severe infection even if their antibody levels have fallen six-fold from the level needed to prevent symptoms.

This has prompted some people to question whether booster jabs are needed.

Teresa Lambe, one of the co-developers of the AZ vaccine from the University of Oxford, says that even after a single vaccine, antibody levels remain high for at least a year, while T-cell responses (the cells that target and destroy virus-infected cells) are ‘relatively strong’ at six months.

Introducing a booster campaign also raises ethical issues when some countries have barely started administering their first doses. But the view from the Joint Committee on Vaccination and Immunisation (JCVI) is that it is better to be safe than sorry.

JCVI member Dr Anthony Harnden said earlier this year: ‘I think we’re likely to make a bold decision to recommend a booster jab, even if we haven’t got all the evidence of the necessity, just because I think the consequences of not immunising with the booster dose are so big.’

Professor Irving adds: ‘Understandably, there is always a tendency towards caution. You don’t wait until lots of vaccinated people are falling ill to introduce a booster campaign.’ 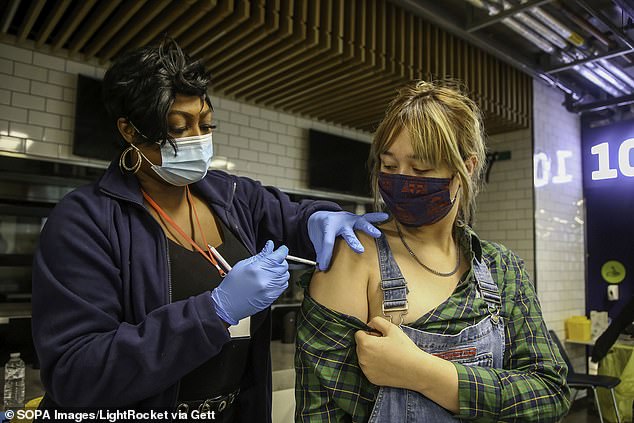 Studies suggest that people will be protected against severe infection even if their antibody levels have fallen six-fold from the level needed to prevent symptoms. This has prompted some people to question whether booster jabs are needed

Should the booster be the same type as my first jabs?

The Cov-Boost study, led by Southampton NHS Foundation Trust, is looking at the effectiveness of a ‘booster’ jab in almost 3,000 patients, assessing seven different vaccines as potential boosters.

Participants in the trial could be given a different one from the type they were originally vaccinated with, suggesting a ‘mix and match’ approach may be adopted.

Existing research suggests this might be beneficial: the Com-Cov study, led by the University of Oxford involving 800 people, showed that giving different vaccines (Pfizer and AZ) for the first and second doses generated more antibodies and T-cells than double-dosing with two of the same vaccines.

Some of the jabs now being tested as boosters are not yet approved for use in the UK: they are Novavax, Valneva, Janssen and CureVac. Other boosters being tested are AZ, Pfizer and Moderna.

Yes. The Government has said the booster jabs will be administered alongside the annual flu vaccination.

‘There is no medical reason why you couldn’t have a Covid booster jab and the annual flu vaccine at the same time,’ says Professor Irving.

‘We are constantly exposed to foreign antigens just by our day-to-day activities, and there is good evidence that giving multiple vaccines simultaneously is safe.’

As I’ve had a jab already, will I get a stronger/bad reaction?

Professor Irving says: ‘There is always the possibility of an adverse event with any vaccine. However, side-effects usually happen with the first dose if they are going to happen.’