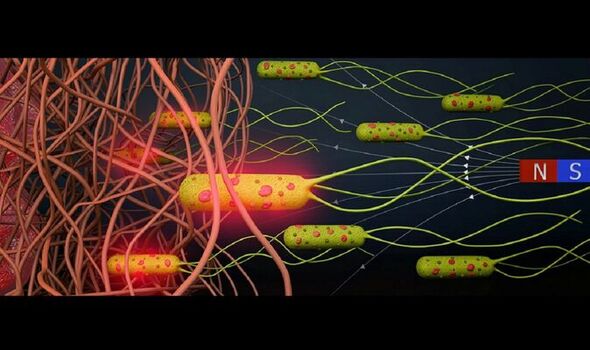 The tiny machines swarm around tumours – releasing a payload of chemotherapy drugs. An army of bacterial ‘biohybrids’ unleash hell on diseased cells – leaving healthy tissue alone. They could revolutionise oncology.

The US team harnessed the power of intestinal E. coli bugs, not the strain that causes sickness, equipping them with artificial components.

First author Birgul Akolpoglu, a PhD student at the Max Planck Institute, Stuttgart, said: “Imagine we inject such bacteria based microrobots into a cancer patient’s body.

“With a magnet, we could precisely steer the particles towards the tumour. Once enough microrobots surround the tumour, we point a laser at the tissue and by that trigger the drug release.

“Now, not only is the immune system triggered to wake up, but the additional drugs also help destroy the tumour.”

E. coli are the ‘superheroes’ of the microbial world – fast, versatile swimmers that can go through liquids or highly viscous tissues. They also have highly advanced sensors.

Bacteria are drawn to chemical gradients such as low oxygen levels or high acidity – both prevalent near tumours.

The German team loaded the vehicles with magnetic particles and spherical shaped carriers called liposomes that contain the medication.

In experiments, they were successfully steered through different courses to miniature tumours grown in the lab.

They included an L-shaped channel with two compartments on each end, with one tumour ‘spheroid’ in each and an even narrower set-up resembling blood vessels.

The bots even travelled through a thick collagen gel resembling cancerous tissue with three levels of stiffness and porosity, ranging from soft to medium to stiff.

Once they added a magnetic field, the bacteria manage to navigate all the way to the other end as it had a higher force.

At their destination, a near infrared laser generated rays with temperatures of up to 55 degrees Celsius.

It melted liposome – and released the enclosed drugs. A low acidic environment also causes the proteins to break – so they open near a tumour automatically.

Co author of the study published in the journal Science Advances, Dr Yunus Alapan said: “This on-the-spot delivery would be minimally invasive for the patient, painless, bear minimal toxicity and the drugs would develop their effect where needed and not inside the entire body.”

Over the past decade, scientists have manipulated magnetic forces to guide medical devices inside the human body – including a heart catheter and gut video capsules.

Co author Professor Dr Metin Sitti said: “Bacteria based biohybrid microrobots with medical functionalities could one day battle cancer more effectively. It is a new therapeutic approach not too far away from how we treat cancer today.

“The therapeutic effects of medical microrobots in seeking and destroying tumour cells could be substantial.

“Our work is a great example of basic research that aims to benefit our society.”