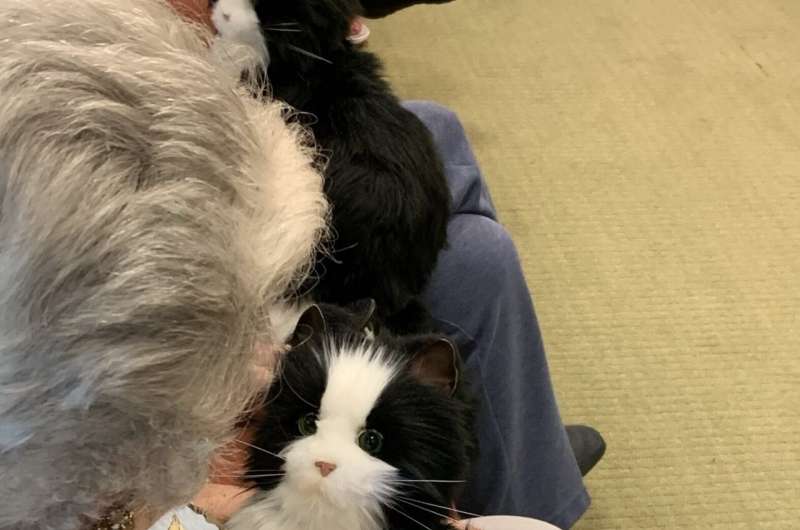 Individuals with Alzheimer’s disease or related dementias (ADRD) often experience behavioral and psychological symptoms such as depression, aggression and anxiety. Frequently, these symptoms are treated with antipsychotics, antidepressants and benzodiazepines, which often have side effects.

While pet therapy is known to be a cost effective and therapeutic intervention for improving mood and behavior in older adults, little is known about pet therapy in adult day centers, despite logistical advantages such as socialization and group activities.

With the help of a cuddly and “furry” companion, researchers from Florida Atlantic University’s Christine E. Lynn College of Nursing tested the effectiveness of affordable, interactive robotic pet cats to improve mood, behavior and cognition in older adults with mild to moderate dementia. The non-pharmacological intervention took place over the course of 12 visits in an adult day center. Participants were informed that their pet was a robot and not a live animal. Each of them selected a name for their cat, which was fitted with a collar and a personalized nametag.

For the study, published in the journal Issues in Mental Health Nursing, researchers assessed mood and behavioral symptoms using the Alzheimer’s Disease and Related Dementias Mood Scale, the Observed Emotion Rating Scale and the Cornell Scale for Depression in Dementia. They also assessed cognition via the Mini Mental State Examination.

Results showed that intervention with a robotic pet cat improved all mood scores over time, with significant improvements in the Observed Emotion Rating Scale and the Cornell Scale of Depression in Dementia. More than half of the participants scored higher on the Mini Mental State Examination post-test than pretest, with slight to moderate improvement in attention/calculation, language and registration. Post-test scores on the Alzheimer’s Disease and Related Dementias Mood Scale were six points higher than pretest conditions.

Researchers frequently observed study participants smiling and talking to their robotic cats and expressing sentiments such as, “the cat is looking at me like someone who listens to me and loves me.” They believed that the robotic pet was responding to their statements through meowing, turning their head or blinking their eyes and that they were having a conversation with the pet. Several of the caregivers reported that their loved one had slept with the cat, held onto the cat when sitting or consistently played with the cat. One participant even slept with her robotic pet cat while she was hospitalized.

“Since there is no cure for dementia, our project offers a way to address symptoms naturally and without the use of pharmacological treatments, which may or may not be effective and have possible detrimental side effects,” said Bryanna Streit LaRose, D.N.P., A.P.R.N., lead author who conducted the study as a doctoral nursing student at FAU, together with co-authors Lisa Kirk Wiese, Ph.D., R.N., an associate professor and Streit LaRose’s faculty chair, and María de los Ángeles Ortega, D.N.P., A.P.R.N., a professor, director of FAU’s Louis and Anne Green Memory and Wellness Center and Streit LaRose’s community chair on the project, both within the Christine E. Lynn College of Nursing. “Our intervention was affordable, safe, and noninvasive.”

By using therapeutic pets instead of live pets, there was no concern about the safety of the pet, feeding them, taking them outside, or making sure they are up-to-date with their vaccines. In addition, there were no fears about participant safety due to possible pet aggression, allergies, tripping over them and the costs associated with caring for a live animal. 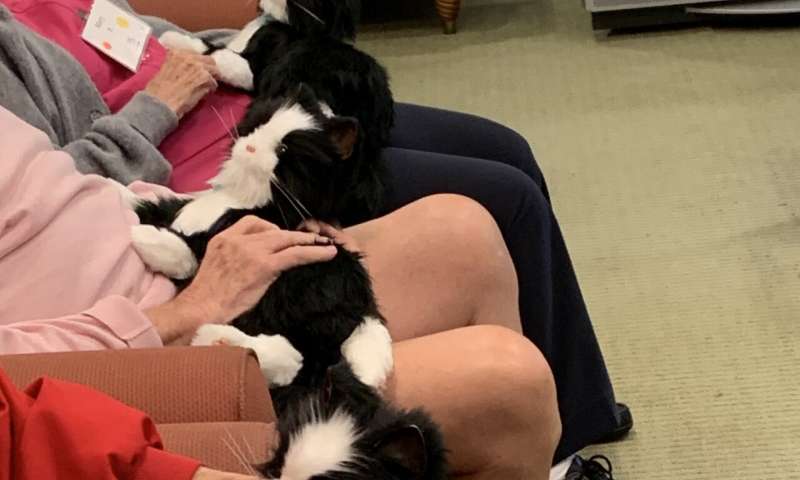 “In addition to improving mood, behaviors and cognition, these robotic pet cats provided our participants with an alternative way to express themselves,” said Wiese. “Importantly, improving overall mood and behavior in individuals with Alzheimer’s disease and related dementias may also improve quality of life for their caregivers and family members.”