Roasting those carrots as opposed to eating them raw could drastically change your gut bacteria, a new study finds.

In research conducted in both mice and humans, scientists found that eating cooked food not only changed the bacteria in our bodies – collectively known as the microbiome – but whether these microbes’ genes were turned ‘on’ or ‘off’.

Researchers say this is because eating cooked food can boost your gut health while many raw foods contain compounds that kill microorganisms, meaning a lot of our intestinal bacteria is destroyed.

The team, led by the University of California San Francisco, says the findings help us understand which foods leave us with the most beneficial bacteria in our bodies and how our microbiomes evolved as early humans learned how to cook food. 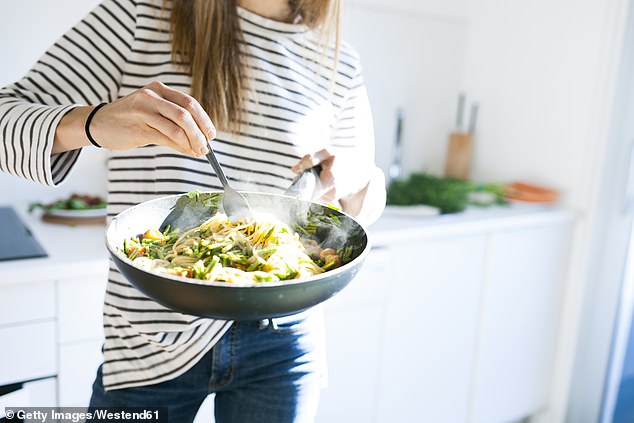 ‘Our lab and others have studied how different kinds of diet – such as vegetarian versus meat-based diets – impact the microbiome,’ said senior author Dr Peter Turnbaugh, an associate professor of microbiology and immunology at UCSF.

‘We were surprised to discover that no one had studied the fundamental question of how cooking itself alters the composition of the microbial ecosystems in our guts.’

For the study, published in the journal Nature Microbiology, the team split mice into four groups.

Researchers found, to their surprise, that there was no difference in the microbiomes of mice who ate raw meat versus cooked meat.

Not only was the bacteria in their bodies different, but also whether certain genes were ‘on’ or ‘off’ and the metabolic products – such as waste – produced by the body.

When the team did the same experiment with an assortment of vegetables – including white potatoes, corn, peas, carrots and beets – they got the same results.

Researchers say one of the reasons for these changes is that several raw foods contain antimicrobial compounds that damage or kill bacteria in our bodies.

‘We were surprised to see that the differences were not only due to changing carbohydrate metabolism but also may be driven by the chemicals found in plants,’ Dr Turnbaugh said.

‘To me, this really highlights the importance of considering the other components of our diet and how they impact gut bacteria.’

UCSF researchers wanted to see if similar microbiome changes would occur in humans and partnered with a professional chef to prepare raw and cooked menus.

Participants tried each diet for three days in random order and then provided stool samples.

The samples revealed that the microbiomes of those who ate a raw diet versus a cooked diet were distinctly different.

‘It was exciting to see that the impact of cooking we see in rodents is also relevant to humans, although interestingly, the specifics of how the microbiome was affected differed between the two species,’ Dr Turnbaugh said.

‘We’re very interested in doing larger and longer intervention and observational studies in humans to understand the impact of longer-term dietary changes.’