You can’t blame being obese solely on your genetics because poor lifestyle choices are the main driver of weight gain, scientists say.

Obesity rates have soared by three-fold since 1975, with almost one in three British adults tipping the scales.

But the trends are the same in people both with and without what are known as ‘fat genes’, according to a study.

This suggests poor diet and lack of exercise is mainly to blame, researchers said. However, they accepted genetics still play a role.

Obesity experts agreed with the findings, saying genes play a ‘minor role’ on weight gain – and our genetics have barely changed over time. 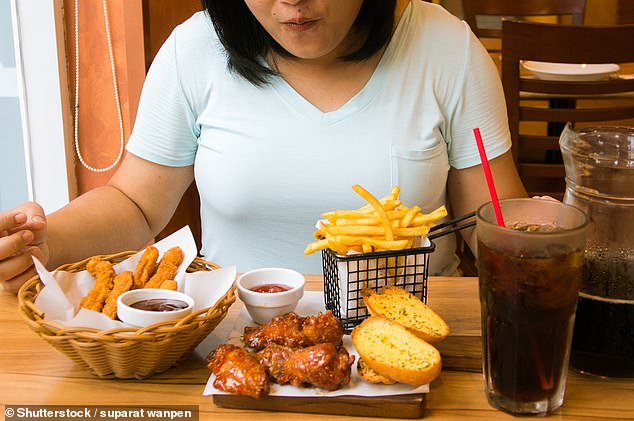 Weight has soared for people with and without a genetically predisposition since 1975, suggesting a poor diet and lack of exercise is to blame

Scientists based in Norway looked at findings, including BMI measurements, from a previous study of 118,959 adults.

The participants had repeated height and weight measurements recorded between 1963 and 2008.

Their BMIs were analysed with other obesity influencing factors, including age, sex, smoking habits and environmental factors.

BMIs increased dramatically between the mid-1980s and mid-1990s, the research published in the British Medical Journal revealed.

People in the top ‘genetic-susceptibility’ group were more likely to have a higher BMI than those identified as having a lower risk, it found.

But the findings also showed BMI has increased for both genetically predisposed and non-predisposed people since the 1960s.

Lead author Maria Brandkvist, a PhD student at the Norwegian University of Science and Technology, said: ‘This finding provides a novel insight into the role of genetics in the development of obesity.

‘Genetically predisposed people are at greater risk for higher BMI and that genetic predisposition interacts with the obesogenic environment resulting in higher BMI.

‘However, a more sedentary lifestyle and possibly changes in the biological environment, such as toxins and microbiota, could also contribute.’

The researchers found, for example, that 35-year-old men with the ‘fat gene’ were 8.6lbs (3.9kg) heavier in the mid-1960s than men the same age without the gene.

Four decades later, the gap in the two groups of men had nearly doubled, in line with rising obesity rates, with similar trends in women.

In addition, he will have gained an extra 15.6lbs (7.1kg) ‘simply as a result of living in our “obesogenic” environment,’ she added.

‘This man’s 30.6lbs (13.9kg) excess weight is caused mostly by today’s unhealthy lifestyle, but also by how his genes interplay with the environment,’ Ms Brandkvist said.

Professor David Curtis, of the University College of London Genetic Institute, said research has often exaggerated the effect of genetics on weight.

He told MailOnline: ‘Genetics may impact minor role on how peoples bodies use food. But their weight is upmost determined by how much they eat.

‘We have seen in European countries that obesity is increasing. But people’s genes haven’t changed.

‘They are the same as our grandparents’. But we are eating highly calorific foods and living very sedentary lives.

‘We have a culture that accepts people being fatter and it’s becoming the norm. That has nothing to do with our genetic makeup.

‘The only way you can get fat is by eating more food than you are burning up in your activities.’

Nottingham-based GP and obesity expert Dr Ian Campbell said: ‘This study reaffirms how important it is that we treat people as individuals.

‘There is no simple solution to the obesity epidemic.

‘Certainly we need to reign in the food and advertising industries, and maintain measures that limit access to unhealthy foods, the environment is one of the few really positive changes we can make.’

WHAT IS OBESITY? AND WHAT ARE ITS HEALTH RISKS?

Obesity is defined as an adult having a BMI of 30 or over.

A healthy person’s BMI – calculated by dividing weight in kg by height in metres, and the answer by the height again – is between 18.5 and 24.9.

Among children, obesity is defined as being in the 95th percentile.

Percentiles compare youngsters to others their same age.

For example, if a three-month-old is in the 40th percentile for weight, that means that 40 per cent of three-month-olds weigh the same or less than that baby.

The condition costs the NHS around £6.1billion, out of its approximate £124.7 billion budget, every year.

This is due to obesity increasing a person’s risk of a number of life-threatening conditions.

Such conditions include type 2 diabetes, which can cause kidney disease, blindness and even limb amputations.

Research suggests that at least one in six hospital beds in the UK are taken up by a diabetes patient.

Obesity also raises the risk of heart disease, which kills 315,000 people every year in the UK – making it the number one cause of death.

Carrying dangerous amounts of weight has also been linked to 12 different cancers.

This includes breast, which affects one in eight women at some point in their lives.

Among children, research suggests that 70 per cent of obese youngsters have high blood pressure or raised cholesterol, which puts them at risk of heart disease.

And if children are overweight, their obesity in adulthood is often more severe.

As many as one in five children start school in the UK being overweight or obese, which rises to one in three by the time they turn 10.