Putting raw spinach in a smoothie is the healthiest way to eat the vegetable because heat destroys its antioxidants, scientists discover

Chopping up spinach and putting it in a smoothie is the healthiest way to eat it, research suggests.

Cooking the leafy vegetable breaks down its antioxidants, while mixing it raw with yoghurt or milk helps to release the powerful nutrient lutein.

Boiling or frying spinach are sure-fire ways of destroying lutein, a study found. 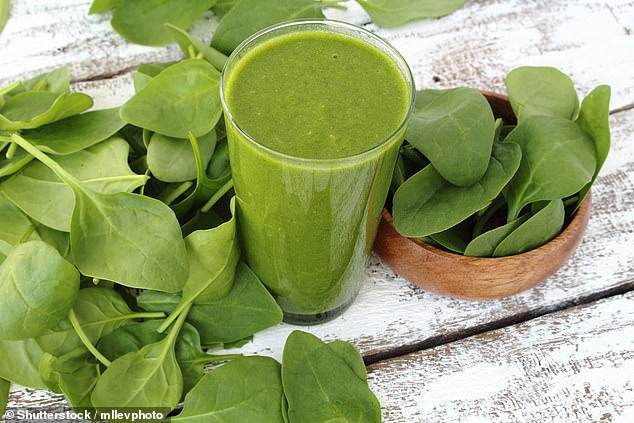 Keeping spinach raw, chopping it up and putting it in a smoothie with dairy is the healthiest way to eat it. Cooking the green vegetable destroys its antioxidants, such as lutein, Swedish researchers found. Lutein can reduce the risk of heart disease and eye damage

They measured the lutein levels regularly and concluded the leaves are best chopped up and consumed raw alongside dairy.

‘Best is not to heat the spinach at all,’ PhD researcher and study author Rosanna Chung said.

‘And even better is to make a smoothie and add fat from dairy products, such as cream, milk or yoghurt.’

She explained: ‘When the spinach is chopped into small pieces, more lutein is released from the leaves and the fat increases the solubility of the lutein in the fluid.’

The more lutein dissolved into a smoothie, the more it can be absorbed by the body, the scientists suggested.

Whereas cooking spinach for a long time at a high heat – such as in a lasagne or frying it – is the most damaging way to prepare the green vegetable.

A meal cooked at a lower heat, like a stew, retains more of the vitamin, with heating spinach in a microwave also potentially being a healthier option, the study suggests.

Study author Professor Lena Jonasson, from the department of medical and health sciences, said: ‘What is unique about this study is that we have used preparation methods that are often used when cooking food at home.

‘And we have compared several temperatures and heating times.

‘We have also investigated methods of preparation in which the spinach is eaten cold, such as in salads and smoothies.’

The research was published in the journal Food Chemistry.

Lutein has been shown to help reduce chronic swelling in the blood vessels of people with coronary artery disease, which can lower their risk of a heart attack.

It is also referred to as the ‘eye vitamin’ because lutein it is thought to protect against damage from sunlight.

Many also take lutein supplements in a bid to reduce their risk of heart disease, colon or breast cancers, and type 2 diabetes, according to WebMD.

REVEALED: THE 36 NUTRIENTS THAT HELP YOU LIVE LONGER, HOW THEY BENEFIT YOUR HEALTH AND WHAT TO EAT TO GET THEM

Found in: Liver, fish oils, milk, eggs, and orange vegetables, such as sweet potatoes and carrots

Found in: Animals products, including meat, poultry, fish, eggs and dairy; as well as fortified cereals

Found in: All fruit and vegetables, particularly broccoli, Brussels sprouts and cauliflower

Protects against: Spina bifida in newborns when taken in early pregnancy, certain cancers and anaemia

Found in: Dairy, green leafy vegetables, soya beans, tofu, fish where you eat the bones; such as sardines, and fortified products; like bread and soya drinks

Protects against: Low levels of oxygen in the body

Protects against: Muscle and nerve damage

Found in: Salt, and smoked and cured meats

Protects against: Bacterial infections and acne

Found in: Sunlight and oily fish, such as salmon, sardines and mackerel

Protects against: Heart disease, cognitive decline, diabetes and mitochondrial diseases, which can cause brain damage.

Mitochondria are the ‘energy powerhouses’ of cells

Found in: Fish and other seafood, seaweed, eggs and the dark meat of poultry

Protects against: Heart disease, and brain and eye damage

Found in: Fruit and vegetables

Carotenoids are antioxidants produced by plants. The following make up 95 per cent of those in the human body:

Found in: Fruit and vegetables

What are the associations of metabolome, microbiome, and immune perturbations with severe COVID-19?