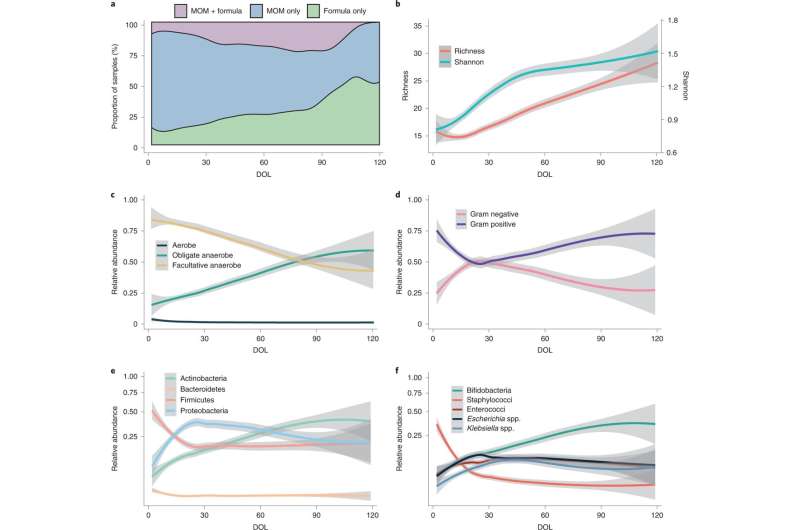 Premature babies in neonatal units could be given personalized prescriptions of bacteria directly into their stomachs to improve health and reduce disease risk, new research has revealed.

Probiotics are given in some neonatal intensive care units (NICUs) across the world, following their conditional recommendation by the European Society for Pediatric Gastroenterology Hepatology and Nutrition (ESPGHAN) two years ago.

Many probiotics, typically including Bifidobacterium, are thought to improve the balance of “healthy” versus “non-healthy” bacteria living in babies’ guts.

A study by experts at Newcastle University and Newcastle upon Tyne Hospitals NHS Foundation Trust, published today in Nature Microbiology, shows that probiotics do not give uniform results. This raises the likelihood that probiotic prescriptions need to be better tailored to individual infants’ needs to improve their health and survival.

In the largest study of its kind, the Newcastle team of neonatal clinicians and scientists examined the gut microbiome—the variety of bacteria existing in stomachs and intestines—of 123 babies, born before 32 weeks’ gestation during their first week of life up to day 70.

Using feces samples, obtained from the Great North Neonatal Biobank, based at Newcastle University, they used a technique known as metagenomic sequencing to identify the species of bacteria present.

The team also investigated the factors known to influence gut flora, such as mode of birth (vaginal or Cesarean); mode of feeding (breast or formula); antibiotic use as well as probiotic ingestion.

In contrast to babies born at term whose gut microbiome is most impacted by breast feeding and vaginal delivery, the single most significant factor in shaping gut flora in preterm babies was the presence of probiotics. Therefore, scientists were able to deduce that probiotics are particularly important to preterm babies in intensive care.

When they carried out further analysis and laboratory tests to examine the impact of the two different probiotics on infant gut epithelial cells, they were surprised to find quite different responses.

Dr. Christopher Stewart, who leads work at Newcastle University’s Translational and Clinical Research Institute, said, “Given probiotics are the deliberate administration of viable bacteria, it was somewhat expected that they would be found to impact the preterm infant gut microbiome.

“What was less expected was the extent of this impact on the preterm infants own gut cells, which we found interacted in a unique way when exposed to feces from infants receiving probiotics.”

The study’s findings highlight the need for a personalized medicine approach that NICUs may adopt where infants are given customized probiotics according to an analysis of their gut flora and other factors to determine the mix of bacteria.

Lauren Beck, a Ph.D. student at Newcastle University’s Faculty of Medical Sciences, said, “There probably isn’t a one size fits all probiotic. Different probiotics contain different strains, in different doses, and, as a result, they are going to have a different impact on gut flora development in infants.

“What our results show is the importance of probiotic selection because each different product, even though on the surface it might appear to have similar bacteria, could have very different impacts on the structure and the function of the infant gut.”

The Newcastle team will now continue their work examining whether probiotics prevent disease in preterm babies.

Dr. Janet Berrington, consultant neonatologist at Newcastle’s Royal Victoria Infirmary and co-senior author of the study, said, “Clinically we are interested in the potential of probiotics to improve gut health and the current work, which focused on healthy babies, highlights they are having impacts.