People with arthritis may be more likely to die of heart disease because their joint pain stops them exercising, scientists have said.

A study found the chance of suffering a fatal heart problem rose the longer the patient had been diagnosed.

Living with the agonising condition for nine to 11 years, for example, raises the risk of dying prematurely by 16 per cent compared to the general population.

Doctors have long known that arthritic patients may go on to develop cardiovascular disease, which can be triggered by inflammation.

The reasons remain unclear, however these researchers suggest arthritis makes it difficult to be active and a sedentary lifestyle may lead to obesity, a key driver of heart problems. 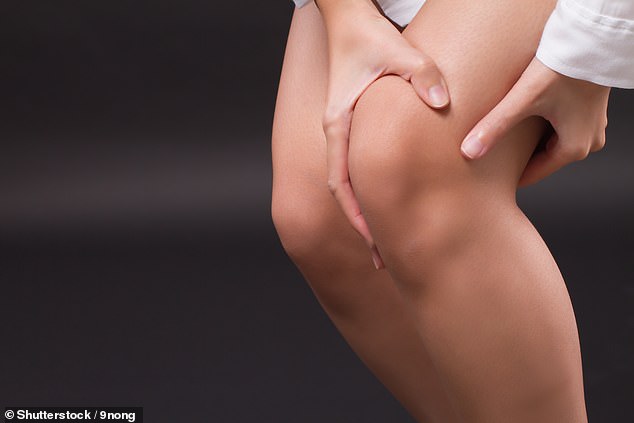 People with arthritis may be more likely to die of heart disease because their joint pain stops them exercising, scientists have said (stock image)

Researchers at Lund University in Sweden studied approximately 469,000 people living in Skåne, Sweden, between 45 and 84 years old at the start of the study in 2003.

The group included 16,000 patients with knee arthritis, 9,000 with hip arthritis, 4,000 with wrist arthritis and 5,500 with other forms of osteoarthritis.

They had all been diagnosed in 2003 or before.

Lead author professor Martin Englund and his colleagues looked at the cause of death for all participants between 2004 and 2014, and compared this to people in the general population using registers.

Knee and hip osteoarthritis, the most common forms of the degenerative joint disease, had the most severe outcomes of all types of arthritis.

Professor Englund said: ‘The groups were not different in terms of most causes of death, but we saw the risk of mortality from cardiovascular disease was higher for those with an osteoarthritis diagnosis.’

WHAT MAY CAUSE HEART DISEASE IN ARTHRITIC PATIENTS?

If you have rheumatoid arthritis, you’re at a higher risk of developing cardiovascular disease than the population at large, according to the NHS.

The reasons are unclear, but it is likely due to a number of things.

Rheumatoid arthritis is an autoimmune disease, which means the immune system – which usually fights infection – attacks the cells that line your joints by mistake, making the joints swollen, stiff and painful.

According to the American Heart Association, there are six independent risk factors for heart disease that you can modify or control: smoking, high cholesterol, high blood pressure, inactivity, obesity and diabetes.

These also correlate with arthritis.

Exercising can be especially difficult for those with arthritis as well as for those who are overweight or obese.

You’re in pain, so you don’t exercise, and not exercising means your joints hurt more. That can lead to a sedentary lifestyle that increases your heart disease risk.

Health experts recommend starting slowly and sticking with a diet and exercise program that suits the patient.

For every 100,000 people who had osteoarthritis for between nine and 11 years, 40 more died of cardiovascular diseases per year, compared to the population without osteoarthritis.

The study did not investigate the reasons behind this link, but the authors speculated.

Professor Englund said: ‘Osteoarthritis causes pain, which often results in people not being as mobile and becoming sedentary instead.

‘Thus, there is a risk of weight gain, which we know leads to secondary diseases, including cardiovascular diseases.’

Previous research has found people with rheumatoid arthritis have the highest risk of fatal heart disease of all arthritis types.

More than 50 per cent of premature deaths in people with rheumatoid arthritis (RA) result from cardiovascular disease, according to a 2011 review of 24 mortality studies published in Nature Reviews Rheumatology.

Although they are important, it may simply be due to inflammation, both in RA and osteoarthritis.

Inflammation is the swelling of tissues and blood vessels inside the body and can cause permanent damage if it carries on for a long time.

Professor Englund added: ‘There are also other background factors in common for osteoarthritis and cardiovascular disease.

‘Inflammation can be a contributory cause of osteoarthritis, and can also lead to an increased risk of cardiovascular disease.

‘Regardless, it’s important to be physically active and keep body weight in check.’

The NHS states that regular exercise to keep muscles strong and control weight is necessary for patients with arthritis and to prevent a diagnosis.

Around 10million people are diagnosed with the incurable condition in the UK, and 30million in the US.