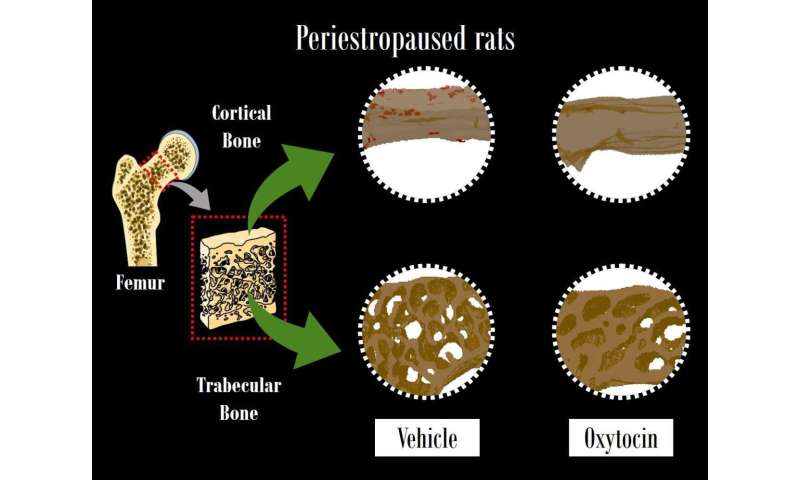 Oxytocin, produced by the hypothalamus and sometimes known as the “love hormone” for its involvement in pair bonding and orgasm, can be a strong ally in the control and prevention of osteoporosis, according to a study by scientists at São Paulo State University (UNESP) in Brazil.

The study showed that when administered to female rats at the end of their fertile period, the hormone reversed precursors of osteoporosis, such as reduced bone density, decreased bone strength and a lack of substances that promote bone formation.

“Our research focuses on the prevention of primary osteoporosis, so we investigate physiological processes that occur during the premenopausal period. In this part of a woman’s life, measures can be taken to prevent bone brittleness and fractures, which lead to lower quality of life and can shorten life expectancy,” said Rita Menegati Dornelles, a researcher affiliated with UNESP’s Araçatuba Dental School (FOA). Dornelles heads the Endocrine Physiology and Aging Laboratory in the school’s Department of Basic Sciences.

The study was supported by São Paulo Research Foundation—FAPESP. A description of the study is published in Scientific Reports.

According to Dornelles, the important hormonal milestones in a woman’s life are puberty and perimenopause, a transitional period starting some years before menopause itself as the ovaries gradually begin to produce less estrogen. These milestones mark the beginning and end of fertility, respectively.

“There’s a lot of research on the postmenopause phase, which follows a woman’s last period, but hormone swings in perimenopause are already sharp and are associated with a gradual decrease in bone density,” Dornelles said. “More research is needed to support the prevention of osteoporosis during perimenopause, as the period after menopause represents about a third of a woman’s life and should have the best quality possible.”

In the study, the researchers administered two doses of oxytocin 12 hours apart to ten female Wistar rats. They were 18 months old, an unusually advanced age for laboratory rats, which have an average life expectancy of three years. Most in vivo experiments involve young rats that have been ovariectomized, i.e., had their ovaries surgically removed. The study involved rats in “peri-estropause”, considered to be the equivalent of perimenopause in humans, that were undergoing a natural aging process.

Thirty-five days after oxytocin was administered, the researchers analyzed blood samples and samples of tissue from the femoral neck (the upper portion of the femur just below the hip joint and the most common location for a hip fracture), comparing the results with those for ten 18-month-old female Wistar rats that were not given the hormone.

There was no evidence of osteopenia (loss of bone density) in the animals treated with oxytocin, in contrast with the control group. “Our results demonstrated that oxytocin helps to modulate the bone remodeling cycle in senescent rats,” Dornelles said. “The animals that received the hormone displayed an increase in biochemical markers associated with bone renewal and in the expression of proteins that support bone formation and mineralization.”

Analysis of the blood samples showed increased activity of key bone formation markers, such as alkaline phosphatase. “This substance is produced by osteogenic cells and associated with mineralization. We also observed reduced activity of tartrate-resistant acid phosphatase, a marker of bone resorption,” Dornelles said.

The rats treated with oxytocin had denser bones. “We found the femoral neck region to be stronger and less porous. Its biomechanical compression response was better, and it had physico-chemical properties that guaranteed higher density,” she said.

Oxytocin is produced by the hypothalamus and released by the pituitary gland. Scientists discovered early in the twentieth century that its release is associated mainly with childbirth and breastfeeding. More recent studies have shown that many other cells also secrete oxytocin.

“It’s secreted by bone cells, and our research has evidenced its association with bone metabolism in females during the aging process. Osteoporosis is more frequent among postmenopausal women, who generally tend to have lower blood plasma levels of oxytocin,” Dornelles said.

The UNESP research group has been studying the involvement of oxytocin in bone metabolism for ten years. “In this time span, we’ve succeeded in characterizing animal models that simulate perimenopause in women,” Dornelles said.

According to the World Health Organization (WHO), the number of hip fractures associated with osteoporosis is projected to increase 630% in Brazil by 2050, compared with 50% in developed countries. “The rise has to do with the aging of the Brazilian population,” Dornelles said, adding that quality of life, diet and physical exercise are all important disease prevention factors.

In the study, the researchers focused on the femoral neck because it is the most common location for hip fractures, which are three times as frequent in women as in men. “The consequences of these fractures are very drastic, including loss of mobility and comorbidities,” Dornelles said, adding that hip fractures are associated with high mortality rates: 24% of patients die within 12 months of a hip fracture, and the heightened risk of death can persist for at least five years.

“Loss of function and independence is profound among survivors,” she said. “Approximately 40% become unable to walk independently, and about two-thirds of these need help a year later. Less than half recover their previous level of function.”