Almost one in six GP surgeries which existed in England in 2004 are no longer open, according to figures.

The sharp increase is concerning for GPs trying to deal with the pressure of staff shortages, and for patients who face longer waits to see their doctors.

And the effects are creating a postcode lottery, with patients in some parts of the country nearly four times as likely to have to wait a fortnight to see their GP, data has revealed. 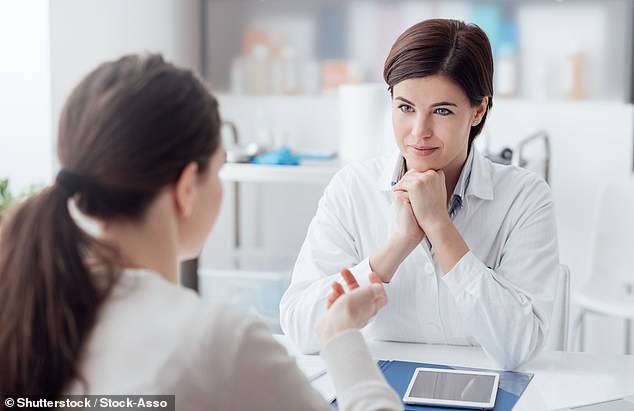 Almost one in six GP surgeries that existed in England in 2004 no longer exist, according to figures, leading to the average number of patients at each practice rising by 45 per cent (stock image)

Overall, the number of GP practices has dwindled by 18 per cent, falling to 6,993 surgeries compared to 8,486 in 2004, analysis of NHS Digital data by GPonline revealed.

There are now more practices that patient lists longer than 15,000 than there are practices with fewer than 3,000 patients.

Even more concerning are the seven practices with more than 50,000 patients on their lists – there are 73,453 registered at the largest practice in England.

The British Medical Association’s Dr Richard Vautrey told GPonline the reason for the decline was ‘a lack of investment over the past 12 years and the consequent problems with recruitment’.

‘This is following a trend of practices merging together, getting bigger as the population gets bigger,’ he said.

‘Increasingly as single-handed GPs reach retirement age those practices are often being merged rather than put out to tender and smaller practices are deciding to merge – to gain a greater degree of resilience in larger groups and to share back office teams.’

The Quality and Outcomes Framework (QOF), a pay-for-performance scheme for general practice, was introduced in April 2004.

In an effort to help staff shortages, QOF promised GPs, who could sign up voluntarily, substantial investment in return for delivering a good quality of care.

The number of practices closing has accelerated since April 2013 when NHS England began to oversee the sector, GPonline said.

Between 2004 and April 2013, practice numbers fell by 380 – while in the years since NHS England’s formation the total number of practices has fallen by 1,113.

And the trend is expected to continue, official bodies have said.

The Royal College of General Practitioners said 762 practices in the UK are at risk of closing within the next five years, while the BMA warned last year that one in 10 GP practices could be forced to close by 2022.

But Dr Vautrey said he did not expect mergers and closures to continue as practices across England were incentivised to form primary care networks by July 2019.

The contract will also see almost £1billion invested in practises to address workforce and workload pressures, the NHS Long-Term Plan revealed in January.

‘Hopefully it will give practices confidence that working together doesn’t necessarily mean merging,’ Dr Vautrey said.

‘Strength will come from working as a group, and the need to merge may be lessened.’ 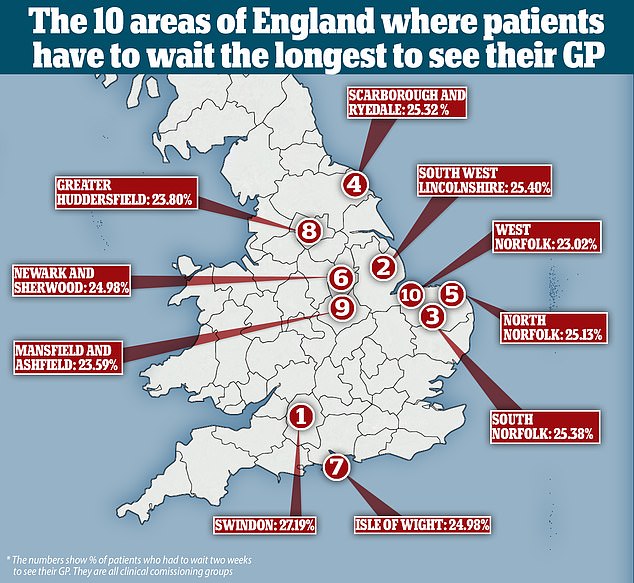 Patients in some parts of the country are nearly four times more likely to have to wait at least a fortnight to see their GP, figures reveal

More than 2.5 million patients across England could see their GP surgeries close in the next five years, experts revealed in November.

The Royal College of General Practitioners said 762 practices in the UK are at risk of closing within the next five years because at least three quarters of their doctors are aged 55 or over and approaching retirement.

Experts said so many closures would have a ‘catastrophic’ effect on the health service.

Appointment waiting times could get even longer, workloads would grow and more people could end up queueing at A&E for minor illnesses.

Campaigners warned the potential closures would be ‘dangerous’ for patients and are calling for ‘drastic action’ to encourage new GPs to join the profession.

The situation is worst in Southend in Essex, where 13 of the area’s 35 GP practices are at risk of closing, potentially affecting nearly 39,000 patients.

A third of surgeries in the London borough of Havering could shut down, and more than 85,000 patients could lose their GP in Sandwell and West Birmingham.

Only around a quarter of areas of England have no practices at risk of closure, according to the RCGP’s estimates.