Men with prostate cancer are three times more likely to die from it if they have a particular genetic mutation.

Up to one in five patients may have a genetic quirk which worsens their chances of survival and makes them more likely to relapse.

Most men with prostate cancer do not die from it, but scientists sought to find those with advanced cancer who were at greatest risk. In a study of 429 men at this stage of cancer, they found those with a mutated gene called RB1 in their tumour were 3.3 times more likely to die. 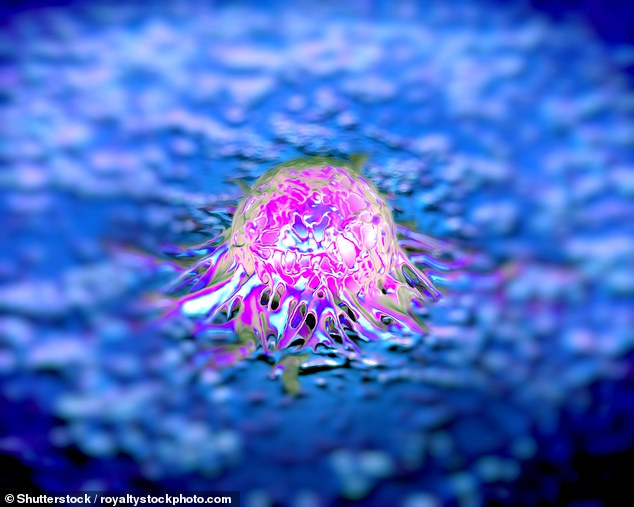 The genetic study is the largest ever carried out for advanced prostate cancer and could help doctors identify men with very aggressive cancer and target them with different treatment.

Co-author Professor Johann de Bono of the Institute of Cancer Research in London said: ‘Our study really got under the bonnet of prostate cancer to understand the “engine” driving tumour growth and explore how a range of genes affect the disease and its response to treatment.

‘We identified one particular genetic mutation that seems to indicate that tumours are going to be very aggressive, and that the affected men need the most intensive treatment we have available.’

Prostate cancer has gained attention lately from actor Stephen Fry and presenter Bill Turnbull talking about their experiences with the disease, while the Daily Mail has long campaigned for improved treatments and diagnosis.

Only one in 41 men with prostate cancer die from it, raising the question of whether patients’ odds of survival are determined by the genes in their tumour.

Researchers from Europe and the US examined 444 tumour samples from men with advanced prostate cancer, finding RB1 affected survival.

RB1, or the retinoblastoma gene, is so-named because mutations in it cause a rare eye cancer in children called retinoblastoma. But it can also keep tumour cells in check so they can’t grow and spread too aggressively or mutate to resist treatment.

Men with a mutation in the gene are thought to miss out on that protection.

Tracking the patients whose tumours they analysed, researchers found those with an RB1 mutation were 6.6 times more likely to relapse after going into remission with prostate cancer.

They were 3.3 times more likely to die than men without a mutation receiving the same standard treatment of the drugs abiraterone and enzalutamide.

It is thought that 10 to 20 per cent of men with prostate cancer have an RB1 mutation.

The study, published in the journal Proceedings of the National Academy of Sciences, found mutations in two further genes linked to a risk of relapse.

They found that men with a genetic mutation which makes them respond well to immunotherapy treatment also tended to have mutations in the genes CDK4 and CCND1. These genes respond to a breast cancer drug called palbociclib, so this may lead to a better treatment for this group of patients.

WHAT IS PROSTATE CANCER?

How many people does it kill?

It means prostate cancer is behind only lung and bowel in terms of how many people it kills in Britain. In the US, the disease kills 26,000 each year.

Despite this, it receives less than half the research funding of breast cancer – while treatments for the disease are trailing at least a decade behind.

How quickly does it develop?

Prostate cancer usually develops slowly, so there may be no signs someone has it for many years, according to the NHS.

If the cancer is at an early stage and not causing symptoms, a policy of ‘watchful waiting’ or ‘active surveillance’ may be adopted.

Some patients can be cured if the disease is treated in the early stages.

But if it diagnosed at a later stage, when it has spread, then it becomes terminal and treatment revolves around relieving symptoms.

Thousands of men are put off seeking a diagnosis because of the known side effects from treatment, including erectile dysfunction.

Tests for prostate cancer are haphazard, with accurate tools only just beginning to emerge.

There is no national prostate screening programme as for years the tests have been too inaccurate.

Doctors struggle to distinguish between aggressive and less serious tumours, making it hard to decide on treatment.

Men over 50 are eligible for a ‘PSA’ blood test which gives doctors a rough idea of whether a patient is at risk.

But it is unreliable. Patients who get a positive result are usually given a biopsy which is also not foolproof.

Scientists are unsure as to what causes prostate cancer, but age, obesity and a lack of exercise are known risks.

Anyone with any concerns can speak to Prostate Cancer UK’s specialist nurses on 0800 074 8383 or visit prostatecanceruk.org