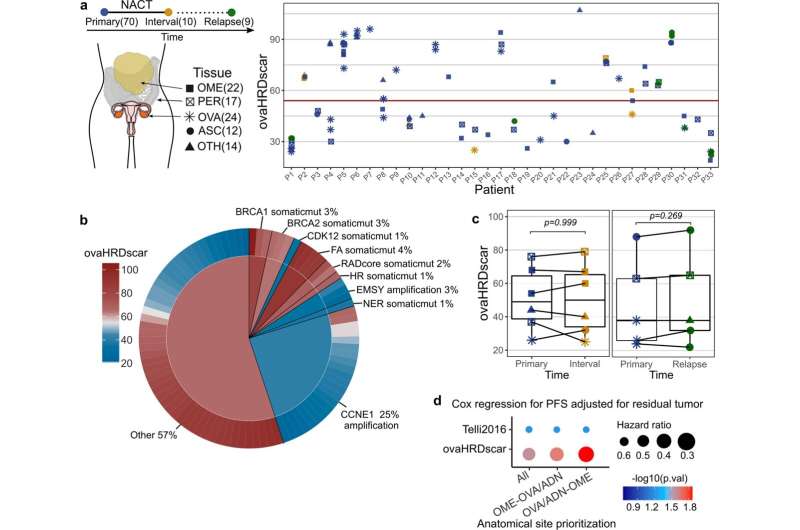 A genetic test developed in a study at the University of Helsinki and Helsinki University Hospital identifies ovarian cancer patients who benefit from PARP inhibitors, a treatment option.

Since the therapy is associated with potential serious side-effects, it is important to be able to target it to the patients that benefit the most from it.

“The genetic test helps to identify patients who do not benefit from the drug, thus avoiding unnecessary treatment and the adverse effects associated with the drug. At the same time, as much as millions of euros of public funds can be saved,” says Specialist Anniina Färkkilä from HUS Helsinki University Hospital.

The test, which has been optimized for the Finnish population, has been clinically approved at HUSLAB and is used to test all patients with ovarian cancer in Finland. In 2022, the Social Insurance Institution of Finland (Kela) included PARP inhibitors in its list of drugs for which expenses are reimbursed based on the genetic test.

“This therapy can now be administered to as many as half of the patients with ovarian cancer,” Färkkilä rejoices.

The prognosis for ovarian cancer is worse than for other gynecological cancers, as the diagnosis is often delayed because of minor and unclear symptoms.

In recent years, the new PARP inhibitors have achieved excellent results as a maintenance treatment for ovarian cancer after surgery and cytostatic therapy in newly diagnosed ovarian cancer.

“PARP inhibitor therapy adds disease-free years and extends survival time. Some patients with advanced ovarian cancer could even be considered cured in the future thanks to PARP inhibitors,” Färkkilä says.

Targeted therapies with the help of artificial intelligence

The test, developed by the researchers with the help of machine learning, reliably identifies patients whose tumors have certain gene defects typical of ovarian cancer.

“Roughly half of ovarian cancers have a deficiency in a specific DNA repair pathway. Cancer cells with this deficiency are unable to accurately repair breaks in the DNA double-strand, which causes the accumulation of DNA lesions,” says Doctoral Researcher Fernando Perez Villatoro from the University of Helsinki.

The lesions are caused by a deficiency in the homologous recombination DNA repair pathway (HRD). It is precisely these tumor types that are sensitive to PARP inhibitors.

“Clinical trials have shown that patients with HRD tumors have a strong response to PARP inhibitors, while the response of other patients is poor,” Perez Villatoro notes.

The study is published in the journal npj Precision Oncology.

The results of the study demonstrated that each cancer type is associated with different characteristics of the genetic lesions related to HRD. In fact, developing a test optimized for ovarian cancer was important for advancing the precision of therapies for the cancer type.

“The gene test and the algorithms are now freely available, and can be used in clinical care and trials to guide the treatment of ovarian cancer,” Perez Villatoro concludes.