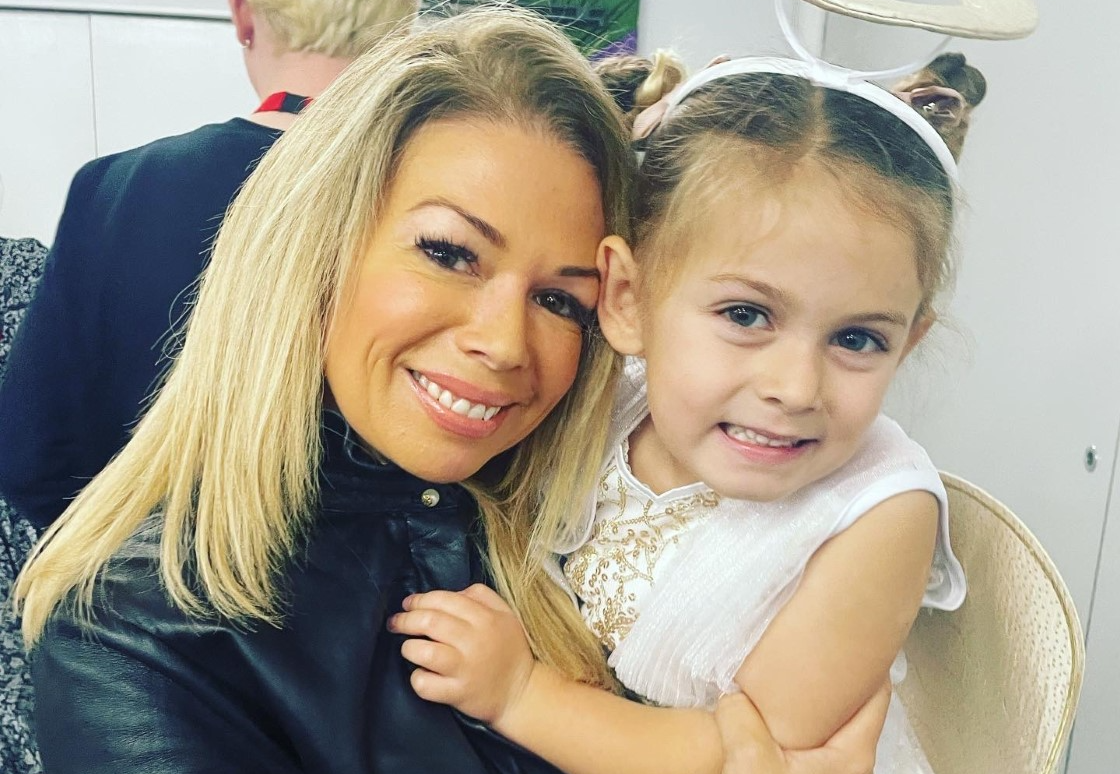 As soon as the doctor saw the rash on my four-year-old daughter Libertie’s back, it was confirmed.

She had Strep A.

I was quite calm to be honest – I was just so relieved we have a good GP practice and she was getting on the right medication.

Thankfully, she’s on the mend now, but we initially just passed it off as a cold.

Libertie started feeling poorly last Thursday when she came home from school complaining that her ears were hurting.

I wasn’t too concerned and just put it down to the cold weather. But that evening, she refused to eat anything and just seemed a bit under the weather.

The following day, she didn’t seem too bad and so I decided to take her into school. But at the classroom door, she was shivering and looked very pale. I then turned back and thought she would be better off staying at home.

She was very lethargic for most of Friday and was just lying on the sofa, barely communicating but in pain with earache and a sore throat.

She was also refusing to eat or drink anything at all, as every time I tried to give her something, she said it was hurting her to swallow.

I was giving her frequent doses of Calpol, which did very little to improve her symptoms. At this point, I put it down to a cold or a viral infection and just kept a close eye on her.

It is never nice when your child is poorly but fortunately my husband and I kept our cool.

It was horrible to see her like that, and the next evening, Libertie was crying in pain saying her throat hurt. She had been very restless during the night and was hot to the touch so I knew she had a temperature.

She is normally a healthy child and so I had never seen her like this before.

I let her sleep in my bed so we could keep her comfortable and my husband and I were close by if she needed us. We were still seeing no signs of improvement despite alternating between Calpol and Neurofen.

By Sunday, we were concerned that she still hadn’t eaten or drunk much at all. We were offering her ice cream, jelly and lollies to try and entice her into eating something but she was just refusing – even the excitement of opening the chocolate advent calendar did nothing.

My husband and I both agreed that on Monday we would get a GP to see her. My mum, who lives very close to me, kept asking us to check if she had a rash.

At this point she didn’t have one, however, her eczema had really flared up; the hotter she got the worse she scratched alongside the other symptoms.

By Monday morning my gut was telling me something was not right as she wasn’t getting any better.

Even though I knew about the rise in Strep A infections, nobody I know has it and she had not been in contact with anyone at school who has been poorly.

On Monday morning, I called the GP and when I explained my daughter’s symptoms to the receptionist, I was given an appointment for the same day at 12.45pm. Our GP is very good, providing you call as soon as they open, you often get to see a doctor on the same day – particularly for small children.

It was only when I got her dressed to go I noticed a rash on her back that resembled sandpaper.

To be honest, I kept calm – as did my husband – even though my mum and sister were constantly reading newspaper headlines and informing us of Strep A and what to look out for.

Your questions about Strep A answered

How do I test my child for Strep A?

Dr Nicole Robb, professor at Oxford and Warwick Universities and co-founder of health-technology firm Pictura Bio, told Metro.co.uk at the moment the only way to get tested is through a health practitioner or a GP.

‘We are all familiar with the rapid antigen tests through Covid, but you cannot just get these at a pharmacy,’ she said.

‘You do need to see a doctor to get those. Again, similarly to Covid, you can have a swab taken from your throat, which will take a day or two to get back.

‘What is lacking is any form of community or at-home testing. One of the things we saw during the pandemic is how fantastic it is to have access to lateral flow tests.

‘If you suspect your child has an illness, you can test them and have an answer in 20 minutes. But we don’t have that. We need to bring these technologies forward, like during Covid.’

What about at-home test kits?

At-home test kits for Strep A are available to be purchased online for as little as £8.99, but they are mostly sold out.

With the high rise in cases, Dr Robb has urged people to seek advice from the NHS rather than trying to self-diagnose.

‘A doctor will be able to use a variety of tests to confirm their diagnosis and will also be able to promptly prescribe antibiotics if needed,’ she said.

‘Early treatment of scarlet fever with antibiotics is important to reduce the risk of more severe complications.’

When should parents seek medical advice?

Knowing the symptoms of scarlet fever is the most important thing for parents, especially those with young children.

Contact NHS 111 or your GP if you suspect your child has developed it.

And call 999 or go to A&E if your child is having difficulty breathing, your child’s skin, tongue or lips are blue, or you child is floppy and will not wake up or stay awake.

Who is most vulnerable?

Strep A is more likely to occur in children than in adults, particularly amongst those that attend go to school or nurseries.

Dr Robb stressed that being together in a confined space may aid transmission.

She said children may also be more susceptible following illness with a viral infection, such as chickenpox.

UKHSA confirmed that, currently, there is no evidence a new strain is circulating.

When asked if children need to be isolated at home during the outbreak, Dr Robb said the country is ‘nowhere near that stage yet’, urging people not to panic.

‘Do not keep your child at home if they are healthy,’ she added. ‘Just exercise caution and common sense.

‘Know what the symptoms are and what to look out for, but don’t panic unnecessarily.’

Downing Street has also urged parents to be on the lookout but stressed the NHS is ‘well prepared’ for such situations.

Why is it becoming more of an issue this year?

Dr Robb said: ‘We are seeing higher levels of Scarlet fever than normal. That could be for lots of different reasons.

‘It could be because of the arrival of the colder winter weather, and people spend more time mixing indoors and that increases transmission.

‘During the last three years of Covid, people have been restricted mostly inside and wearing masks.

‘That not only stopped Covid from spreading but also other common respiratory illnesses like Strep A. If the bugs are not spreading as normal, that just means our immunity as a population has gone down.’

Is there a shortage of antibiotics?

A Downing Street spokesman said it is not aware of any current shortage of the antibiotic amoxicillin.

We have had lots of children off school where my two children go, however, it’s been the usual typical winter issues of colds and viral infections, no mention of Strep A.

When the doctor saw Libertie, he confirmed her ears were both infected, as was her throat and her tongue was coated. The icing on the cake was the typically-related sandpaper rash and he confirmed it was Strep A and made a record of it.

I knew about the tragic deaths of other children but the whole time I just remained calm so as not to upset my daughter. I was not scared, more a bit anxious.

We were issued a prescription for a new antibiotic to be taken four times a day. For almost four days, Libertie had barely eaten a spoonful of anything, so this was really worrying us.

I did ask if Libertie would shake off the infection herself with just Calpol had we not gone to the GP and we were told no. The doctor said antibiotics was the best way to fight off the infection.

To view this video please enable JavaScript, and consider upgrading to a webbrowser thatsupports HTML5video

We were also told that now she’d been given medicine there was nothing to worry about (unless symptoms got progressively worse) and that the antibiotics would work very quickly.

We’re now on day three of the antibiotics and have seen a huge improvement in her. She has slept through the last two nights, whereas before it was a very fitful sleep for her and she would fluctuate between being constantly hot and then cold.

My heart goes out to the parents who have lost children with this illness. It is absolutely horrific.

We informed the school immediately upon diagnosis.

To other parents, I would just advise being vigilant. We found her pretty lethargic prior to her diagnosis and her colour was awful – she looked so pale. Until we noticed the rash on her back, we would have just put it down to a viral infection, of which you don’t often get prescribed antibiotics as a child.

I’m just relieved she is on the mend and got the antibiotics inside her as I am aware of how worrying this infection can be for parents.

As told to Suzanne Baum.