Mucormycosis can occur any time after COVID-19 infection, either during the hospital stay or several days to a couple of weeks after discharge. 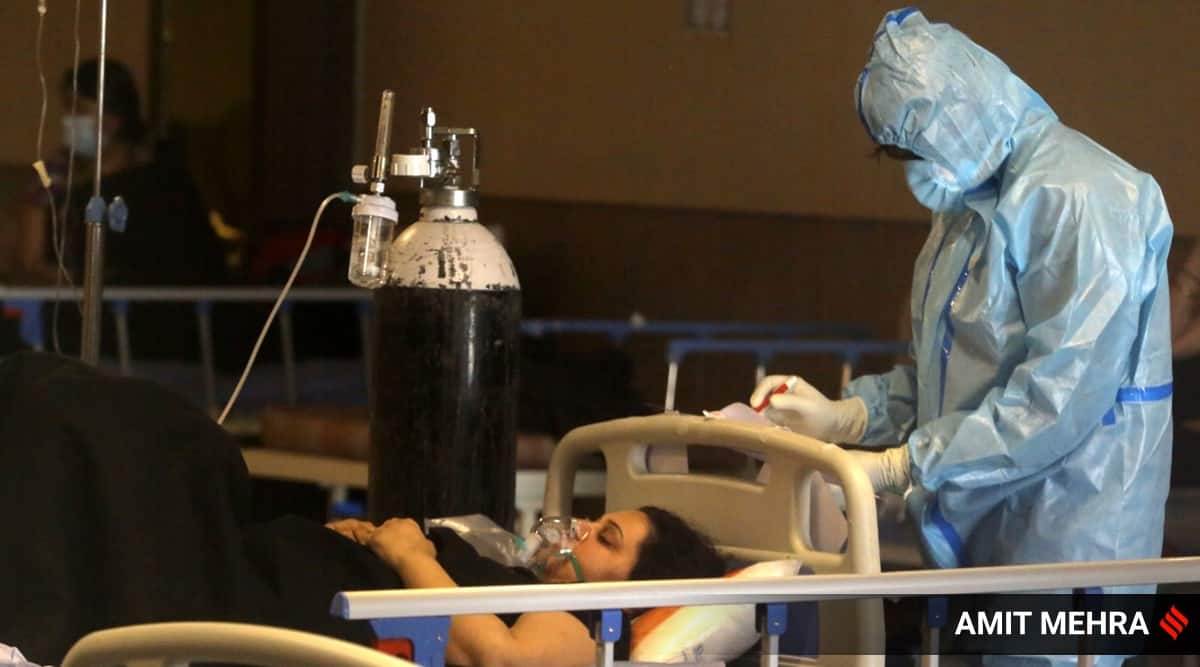 With the world reeling under the throes of a submicroscopic, enigmatically animated infectious particle, the novel coronavirus, we now have to contend with another hitherto not so common opportunistic foe the so-called ‘Black fungus’ infection, academically christened mucormycosis,” said Dr Dhananjaya I Bhat, senior consultant, neurosurgery, Aster RV Hospital.

He added, “The most brutal, ruthless manifestation being Rhino-orbito-cerebral mucormycosis (ROCM). Keeping this in mind we will revisit this lesser-known organism; the fungus and its relevance in the present turbulent uncertain times.”

What is a fungus?

These are organisms separate from the plants and animal kingdoms. They are ubiquitous in nature and are found in the soil, plants, decaying organic matter, water, air, damp places, and also in humans and animals. They play a very important role in our ecosystem along with bacteria, by degrading organic matter into simpler forms for the consumption of plants. “They include the household yeast, molds, mushrooms, and several others. There are about 1,44,000 species of fungi (plural for fungus), out of which some of them are pathogenic to humans. The most common being Candida, Aspergillus, Cryptococcus, Histoplasma, Pneumocystis, and Mucormycetes,” he explained.

What types of infection do these fungi cause?

Generally, some types of fungi don’t cause any infections in humans but can cause sickness in people with weakened immune systems known as opportunistic infections.

Some common types of a fungal infection include:

*Skin infections like ringworm
*Nail infections
*Deeper cutaneous infections following trauma,
*Breach in the skin with subsequent fungal implantation and growth
*Sinus infections and deep lung infections
*The fungi can also affect the gastrointestinal system, renal systems and can cause a full-blown infection resulting from the entry of fungus into the bloodstream.

If the fungi are so common why is it that we rarely get infected by them?

“Thanks to our body’s defense mechanisms, which are continuously and assiduously fighting these omnipresent organisms, we are keeping them at bay and remain infection-free. Once there is a letdown of guard by our immune system, these organisms get an upper hand and unleash morbid and many times lethal infections,” he told indianexpress.com.

Who is susceptible to fungal infections?

As previously mentioned, people with reduced immune response are more susceptible to infection. Conditions that reduce our immunity include:

*Diabetes: High blood sugars with an acidic environment as seen in diabetic ketoacidosis are the right recipe for the rapid growth of these organisms. Diabetes is also associated with reduced immune response.
*Steroids medication increases blood sugar levels and decreases the immune response of the body.
*Blood malignancies, which again results in the defective immune system
*Patients on immunosuppressants as seen with organ recipients and haematologic stem cell recipients.
*Patients with excess iron or taking deferoxamine (specifically used in iron overdose).
*Trauma, burns, and malnourished people.

What is ROCM or Black fungus infection?

Mucormycosis (previously known as Zygomycosis) is a serious but rare fungal infection caused by a group of molds known as micromycetes. Rhino-orbital-cerebral-mucormycosis (ROCM) is caused by molds of the order Mucorales. In this, there are a few subgroups like Rhizopus, Mucor, Rhizomucor which are most commonly involved in this infection. These fungi are angioinvasive i.e, they invade the surrounding blood vessels and destroy them resulting in tissue necrosis and death. These molds live throughout the environment and their spores are present in the air. They get lodged in the nasal cavity and adjoining sinuses.

On reaching a favourable milieu they ensconce themselves within the tissue. The spores germinate, hyphae (filamentous processes) outgrow and release destructive juices which digest the host tissue and provide nutrition to the rapidly growing fungi. As they grow in the nasal cavity they relentlessly destroy the surrounding host tissue. The bones in the nasal cavity and sinuses are destroyed. These include the hard palate, the orbital bones, and the skull base bones. Black masses may be seen in the nasal cavity and oral cavity. If it destroys the orbit and enters the eye socket it may cause bulging of the eyes, pain, frozen eye movements, and blindness. Once it enters the cranial cavity by breaching the skull base it blocks major arteries and venous lakes resulting in major life-threatening brain strokes and bleeds, explained Dr Bhat.

He added that the spores can sometimes travel into the depths of the respiratory system and get comfortably lodged in the lung parenchyma (alveoli and bronchioles). Here the fungi grow rapidly, destroying the lung tissue and compromising blood oxygenation. From there it can spread into the circulatory system resulting in an existential crisis.

The disease is not contagious and doesn’t spread from one person to another.

Why is it occurring in COVID 19 patients?

Mucormycosis can occur any time after COVID-19 infection, either during the hospital stay or several days to a couple of weeks after discharge.

“The COVID-19 causes favourable alteration in the internal milieu of the host for the fungus and the medical treatment given, unwittingly also abets fungal growth. COVID-19 damages the airway mucosa and blood vessels. It also causes an increase in the serum iron which is very important for the fungus to grow. Medications like steroids increase blood sugar. Broad-spectrum antibiotics not only wipe out the potentially pathogenic bacteria but also the protective commensals. Antifungals like Voriconazole inhibit Aspergillosis but Mucor remains unscathed and thrives due to lack of competition. Long-term ventilation reduces immunity and there are speculations of the fungus being transmitted by the humidifier water being given along with oxygen. All the above make for a perfect recipe for mucormycosis infection,” he explained.

What are the clinical features of mucormycosis infection? How do we diagnose them?

Nasal blockage, bleeding, discharge from the nose are initial features of mucormycosis. On endoscopic visualization of the nasal cavity an unmistakable black eschar (slough or dead tissue) coated masses will be present which gives away the diagnosis. As the disease progresses the palate may be destroyed as a large black necrotic mass may be seen on opening the mouth. When the orbit is involved there will be proptosis (protrusion of eyeball), loss of movements of the eyeball with consequent double vision. Eye pain, redness with blindness can follow. If the brain is invaded due to blood vessel blockage there will be strokes, hemorrhages, and even death. Patients can also have headaches, drowsiness, limb weakness, seizures and even death.

Based on clinical suspicion MRI and CT scan of the nasal cavity, sinuses, and brain is performed. These give a clear picture of the presence of the lesion along with its extent.

In lung mucormycosis clinical features are similar to COVID-19 with fever, cough, shortness of breath, making clinical diagnosis difficult. Suspicion of fungal infection must be considered when a patient despite getting appropriate medications is not improving or was improving and has unexplained deterioration. CT chest helps in diagnosis by revealing additional lung lesions. Diagnosis is by microscopic evaluation of the bronchopulmonary lavage aspirate.

Can there be other fungal infections in COVID 19 patients?

In western countries, Mucor has not caused as much havoc as it has in India. However, there has been an increased incidence of other fungal infections like aspergillosis and candidiasis in COVID-19 patients. Clinically lung infections by a fungus are difficult to diagnose. The patient has fever, cough and breathlessness, not unlike what COVID causes. Therefore overlap causes diagnostic quandaries. The clinician should be alert and aware of possibilities of fungal infection and should have a low threshold for suspicion, especially when a COVID-19 patient is improving and suddenly starts having a respiratory decline. Bronchopulmonary lavage and pathological examination for fungi are must in order to incorporate appropriate treatment.

It is a multi-pronged approach. Time is of the essence here. Once a clinical and radiological diagnosis is made, endoscopic evaluation of the nasal cavity can confirm a fungal lesion. Immediate surgical debulking is a must. The surgery can be radical and disfiguring but is acceptable considering the existential crisis of leaving behind any residual tissue. The entire nasal cavity needs to be scoured and all fungal, necrotic tissue needs to be removed. If the orbit is involved surgeries as drastic as exenteration of the eye socket contents may be required. Intracranial decompression may be required if the infection has spread to the brain. Surgical intervention should be undertaken a couple of hours after diagnosis.

In tandem, medical management with antifungal drugs, namely injection Liposomal amphotericin-B needs to be instituted. Older form amphotericin deoxycholate is significantly nephrotoxic. However, the liposomal cousin is safe and effective. Posaconazole tablets/ suspension and intravenous forms are available and are used in lieu of amphotericin if the latter is not tolerated by the patient. Following several weeks of intravenous medication depending on the response the patient is put on oral posaconazole sustained release tablets for several months. Isavuconazole is also an alternative drug that can be used. Drugs are stopped after clinical and radiological clearance of the disease.

During treatment, judicious use of steroids (keeping blood sugar levels under control), antibiotics, and other antifungal drugs need to be done.

Are these infections life-threatening?

These infections are very lethal, and if not treated most will not make it. The mortality ranges between 25 to 90%. Once the infection spreads into the brain mortality is very high. Hence a lot of importance is given to early diagnosis and prompt institution of treatment.

How to prevent the occurrence of ROCM?

Prevention is always better than cure.

*Maintenance of good hygiene and cleanliness is a must. Regular oral hygiene care with mouthwash, povidone-iodine gargles must be done.
*While administering oxygen, water for humidification must be sterile and there should be no leakage from the humidifier.
*Steroid usage must be limited to no more than necessary with strict blood glucose control.
*Unnecessary use of broad-spectrum antibiotics, antifungals should not do as this removes the normal commensal flora resulting in the growth of unwanted organisms due to lack of competition.

*Stay indoors as much as possible
*Regular exercises
*Control of blood sugars
*At home, the surroundings must be clean and free from dust and dampness
*Maintain oral and nasal hygiene
*While going out always wear an N-95 mask
*Avoid construction areas, fields, grounds.
*Soil and plants are the areas that abound with fungi. Hence better to avoid working with soil, gardening. If unavoidable, masks, rubber gloves, and boots are a must.

“The key take-home messages are opportunistic fungal infections are occurring in COVID-19 patients, awareness among health care providers and the public is important, early diagnosis and aggressive treatment are paramount for improving outcomes in an otherwise dismal disease, together we can definitely win this battle against COVID 19 and mucormycosis,” the doctor said.