Mother, 18, reveals her one-month-old baby was ‘days from death’ when a condition left him projectile vomiting every time he ate which doctors dismissed as reflux

A one-month-old baby nearly starved to death due to a condition that caused him to repeatedly projectile vomit.

Jamie Jones, now three months, was given less than a week to live when he became unable to keep anything down.

His mother Amiee Byron, 18, took her son to the GP, only to be told he was suffering from ‘normal’ reflux and indigestion, and she should ‘stop babying him’.

It was not until the newborn became ‘thin and fragile’, that a midwife suspected he may have pyloric stenosis, which occurs when the tube that takes food from the stomach to the small intestine is too narrow.

After not eating properly since January 23, Jamie, of Fareham, Hampshire, was a few days from death when he went under the knife to widen his digestive tube on February 15.

Just days later, Jamie was a ‘whole new baby’, and is now ‘nice and chunky’. It is unclear how much he weighs. 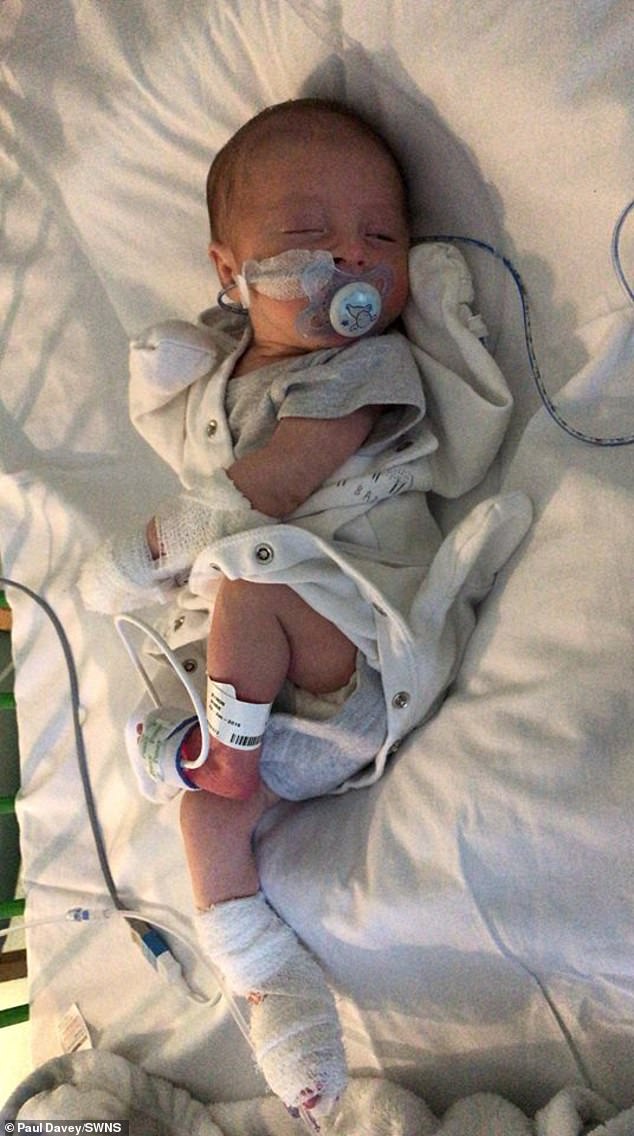 Jamie Jones nearly starved to death due to a condition that causes newborns to projectile vomit. He is pictured at less than two months old at the Royal Alexandra Children’s Hospital in Brighton after surgery to widen his digestive tube, which was narrow due to pyloric stenosis 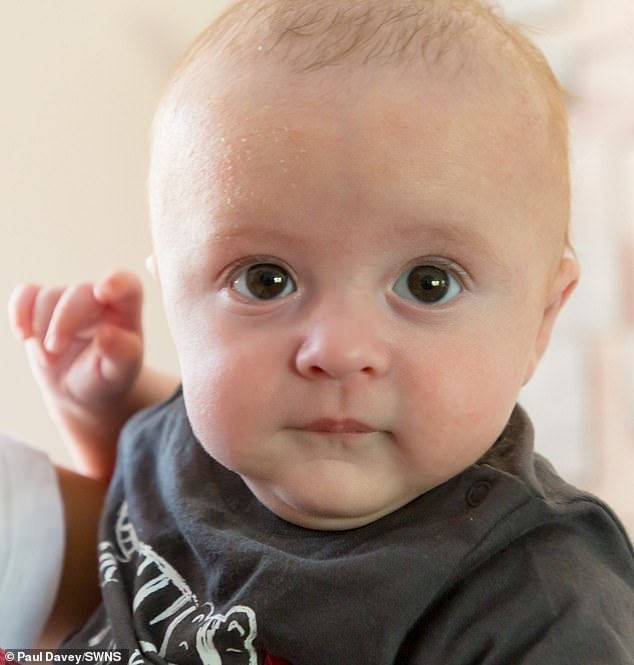 Now three months old, Jamie went from being ‘thin and fragile’ to ‘nice and chunky’ (pictured) 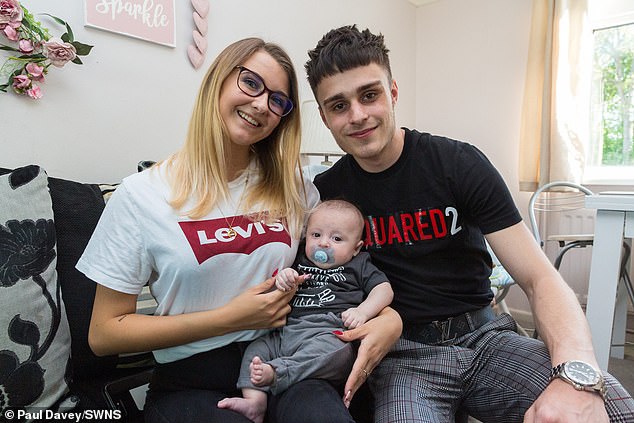 Jamie’s parents Aimee Byron and Will Jones (pictured together after the ordeal) were told their son was just ‘days from death’ when he was operated on. The couple had taken their newborn to ’12 medics over three weeks’, who dismissed his symptoms as reflux or indigestion

Speaking of her son’s condition, Miss Byron said: ‘He was a couple of days away from dying when he had the operation.

‘If he’d have been left another week he probably wouldn’t be here now. It was awful to hear that. I thought we could lose him.

‘Jamie was dying of starvation. He was so weak and so young and his body would have just given up.

Jamie weighed a healthy 7lb 3oz when he was born on January 23 at the Queen Alexandra Hospital in Portsmouth.

With no obvious health problems, the newborn and his parents went home just a couple of days later.

However, it soon became clear Jamie was not feeding well and would vomit after almost every mouthful of milk, which he was fed from a bottle.

By three weeks old, Jamie’s weight had fallen to 6lb 8oz. Miss Byron claims Jamie was seen by 12 medics over three weeks, who dismissed his symptoms as nothing serious.

Her GP even insisted reflux is ‘normal’ in newborns and she should ‘stop babying him’. However, Miss Byron knew something was seriously wrong.

‘I could see he was losing weight and he just couldn’t keep food down,’ she said. ‘He seemed in pain and should have been gaining weight, not losing it.

‘All the clothes we bought him didn’t fit anymore. The weight was dropping off him.

‘I was scared stiff thinking ‘”what on earth is wrong?”. I wondered if it was something I was doing wrong.’ 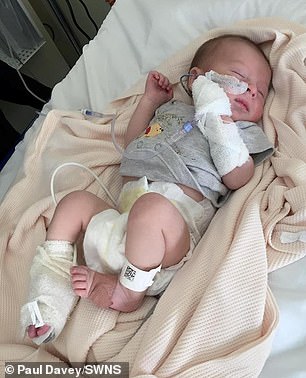 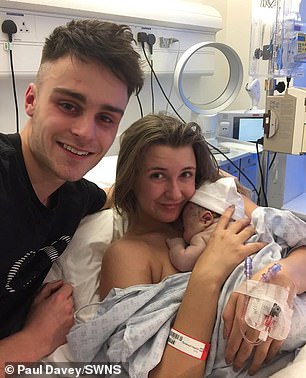 Jamie is pictured left in hospital on February 15 after keyhole surgery through his bellybutton to relieve the tightened muscles that were narrowing his digestive system. Jamie weighed a healthy 7lb 3oz when he was born (pictured right with his parents) on January 23

Jamie continued vomiting despite being given heartburn and indigestion medication. By February 10, the youngster had lost more than 5oz.

Miss Byron recalls one incident where she was on a walk with Jamie and his father Will Jones, 21. ‘There was so much vomit,’ she said. ‘It filled the whole pram and completely soaked everything.

‘It wasn’t nice at all and was quite scary. There was nothing we could do. He just wouldn’t stop being sick.’

Once home, Miss Byron phoned the non-emergency NHS number 111, where she was told to take Jamie to A&E.

Doctors informed the parents their son was likely suffering from a virus or may be allergic to milk. They were therefore advised to try feeding Jamie with a milk-free formula. 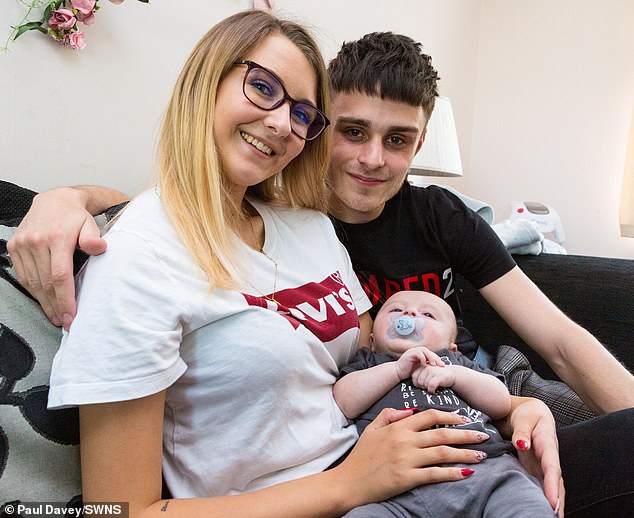 WHAT IS PYLORIC STENOSIS?

Pyloric stenosis is a condition that occurs when the passage between the stomach and small intestine narrows.

This takes place due to the muscular passage becoming thicker, which closes it up. This stops milk or food passing into the bowel to be digested.

It affects between two and four babies in every 1,000, statistics show.

Most babies with pyloric stenosis bring up small amounts of milk after feeding.

After a few days, they may be unable to keep any milk down.

The vomiting may be so forceful it becomes projectile. Due to no food reaching the bowel, the baby also produces less faeces.

Untreated, the baby will become dehydrated and not gain weight.

Signs of dehydration include lethargy, few wet nappies and a sunken soft spot at the top of the head.

Pyloric stenosis tends to develop around six weeks after birth. It is more common in boys and often runs in families.

It is treated via an operation known as a pyloromyotomy.

The involves cutting through some of the thickened muscle so the passage that passes milk and food to the bowel widens.

With things only getting worse, a midwife eventually suspected pyloric stenosis while looking at Jamie’s medical records on February 13.

The medic phoned Miss Byron to arrange an appointment the following day at the Queen Alexandra Hospital in Portsmouth.

Blood tests, an ultrasound scan and a physical assessment then confirmed Jamie’s diagnosis.

‘If that midwife hadn’t have called us then Jamie probably wouldn’t be here now,’ Miss Byron said.

The youngster was transferred to the specialist Royal Alexandra Children’s Hospital in Brighton later that night to await an operation.

‘We just kept getting told it was nothing to worry about and he will be fine.

‘I started to think the problem was me. I thought I was failing as a mum. It was really frustrating.

‘I could see how much weight he lost and he just wanted to sleep all the time.

‘He was floppy and just unresponsive.

‘They were just telling me it’s normal for newborn babies to be sick.’

On February 15, at just 23 days old, Jamie underwent keyhole surgery through his bellybutton to relieve the tightened muscles that were narrowing his digestive system. He was discharged the following day to recover at home. 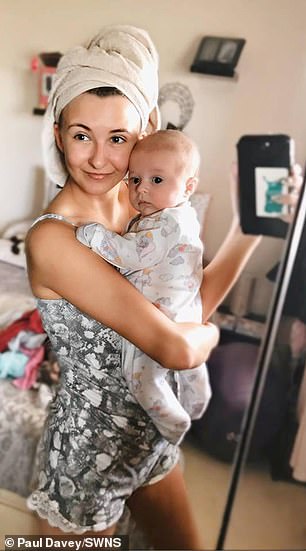 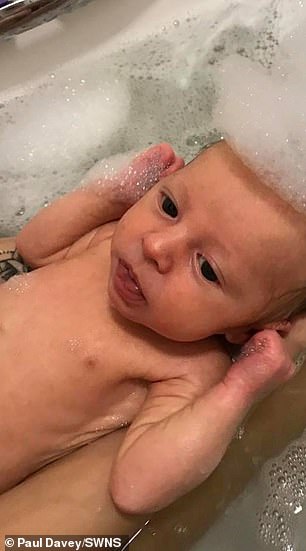 Now healthy, Jamie (pictured left with his mother) is ‘such a little personality’. Pictured while unwell on the right, his weight fell by 5oz, leaving his mother blaming herself

Miss Byron claims her son was almost instantly a ‘whole new baby’, and went from being ‘thin and fragile’ to happy and smiley in a matter of days.

‘The operation changed our lives,’ she said. ‘We could finally start our family life. He was perfect. He started smiling and giggling. He is such a little personality, and is nice and chunky now.’

Miss Byron is speaking out to encourage parents to ‘fight’ for their child if they sense something is wrong.

‘We had to fight for Jamie because he doesn’t have a voice, and it’s important for other new mums and dads to do the same,’ she said.

‘It turned out to be a lot worse than what we were told by anyone at first.’ 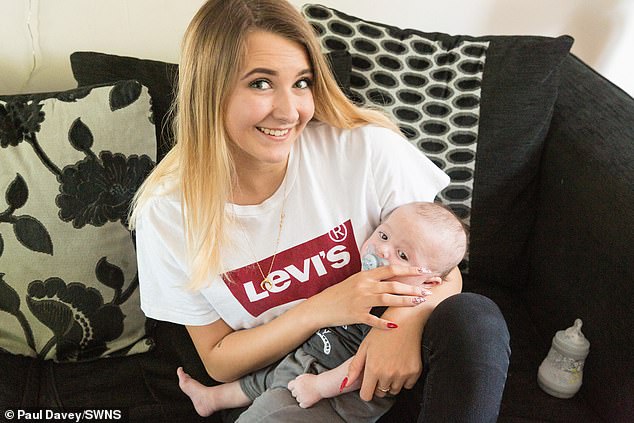