A mother is warning others of the potential dangers of electrical outlets after her child was severely shocked when attempting to plug in a phone charger.

The unnamed mom took to the Facebook group CPR Kids late last month to share her young daughter’s story, telling others that the night the incident occurred “could’ve ended a lot differently” for her little one, who was not identified.

On Nov. 25, the woman’s daughter was admitted to the hospital after receiving a “pretty bad electrical shock from trying to plug my phone charger in,” she wrote.

“Unfortunately this happened right in front of me. I didn't realise [sic] she knew how to attempt to plug in a charger until it was too late,” she continued.

The correct end of the charger was already plugged in, but the girl attempted to plug the side of the charger meant for the phone into the outlet, resulting in an electric shock, the girl's mother said.

“The power strip she tried plugging the charger into (one end was already plugged in, she tried putting the phone part of [the] charger into the outlet) popped, shot sparks and what looked like flames and black smoke and threw her a few feet across the living room,” the mom said. “She was quiet for a few seconds then started screaming and crying.”

The woman rushed her daughter to the emergency room. There, doctors “found an entrance wound but not an exit which worried them that it zapped her heart.” As a result, the girl was required to stay overnight so medical professionals could monitor her heart. 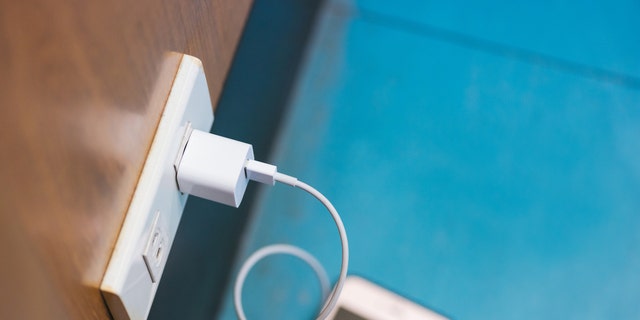 The young girl was thankfully OK, aside from an electrical burn on her right hand.
(iStock)

Thankfully, other than a roughly dime-sized burn on her right hand, the little girl is OK.

“Even though my house is baby-proofed with outlet covers, door stoppers, baby gates, stove knob covers, etc, my baby still got hurt from something I stupidly never even considered would be an issue,” the mom concluded. “Needless to say all power strips will be hidden in spots she can not get to from now on.”

In the post, which has more than 300 reactions and nearly 400 shares as Tuesday morning, CPR kids posted advice on how to care for children who sustain electrical burns.

“For electrical burns, always remember to first switch off the circuit breaker (safety switch) before touching your injured child — so that you yourself don't also become a victim and can then no longer assist your child,” it advised. “Also, be prepared to follow DRSABCD (as electrical injuries can cause damage to the heart and other organs), before following REMOVE, COOL, COVER, SEEK as demonstrated in our first aid for burns video.”