Man is left with chickenpox-like rash on his hands, chest and face after catching a bacterial infection while cleaning his fish tank

A 73-year-old man was left covered in a rash after he caught a bacterial infection from his fish tank.

The unnamed man was referred to the University of Iowa’s infectious disease unit after he developed a non-itchy, painless rash.

Swellings cropped up on his hands, chest, abdomen and face. Tests showed the bacteria Mycobacterium marinum was to blame.

The man is thought to have caught the infection, carried by many fish species, while cleaning his salt or freshwater tanks. 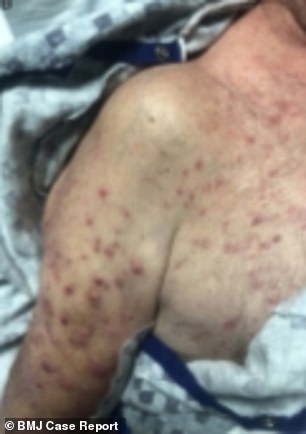 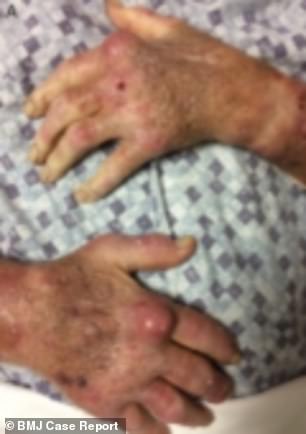 A 73-year-old man was left covered in a rash (pictured left) after he caught a bacterial infection from his fish tank. The man – who has not been named – also had large swellings on his hands (seen right). Biopsies revealed the bacteria Mycobacterium marinum was to blame

After a series of antibiotics, the man’s rash cleared up within a few months. He did not seek help for his symptoms until three months after they first appeared.

The incident was written in a BMJ Case Report by Dr Takaaki Kobayashi, from the department of internal medicine, who treated the patient.

When the man arrived at hospital, he denied having any fever or cough, as well as not recently traveling or coming into contact with an ill person.

Doctors initially thought he was suffering from the bacterial-infection nocardia, which usually affects the lungs, and can cause chest pain, coughing and breathing difficulties.

His rash started to fade after he was given the antibiotics trimethoprim and sulfamethoxazole.

Laboratory tests then revealed he actually had M.marinum.

Due to the severity of his rash, the antibiotic rifabutin was added to his treatment regimen.

A month after he was first seen, his lesions had improved, with them disappearing completely a few months later. 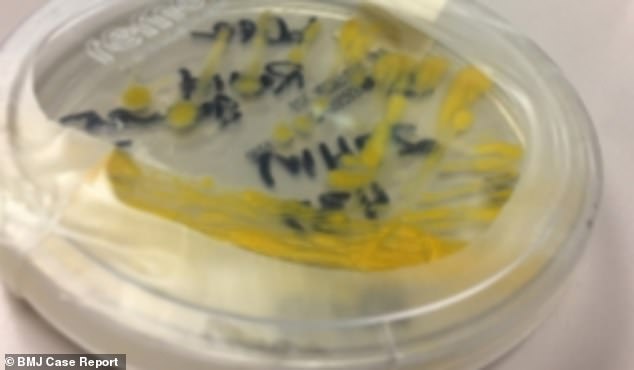 Scientists identified the bacteria due to it producing a yellow pigment when exposed to light (pictured). This prompted them to add another antibiotic to the man’s treatment regimen

FISH PEDICURE CAUSES A WOMAN’S TOENAILS TO FALL OFF

A woman’s toenails fell off after she had a controversial fish pedicure.

The unnamed woman – who was in her 20s – developed onychomadesis, which caused her to shed her nails at their roots, six months after the spa treatment.

The beauty craze peaked in popularity around ten years ago due to unsupported claims it leaves feet smoother, while boosting circulation, eliminating bacteria and even treating psoriasis.

Yet the treatment became less fashionable amid reports it could spread blood-borne infections – such as HIV and hepatitis C – if sufferers bleed in the water.

As a result, fish pedicures have been banned in ten US states but not in the UK.

The woman, who is believed to be from New York, is thought to be the first person to develop onychomadesis from such treatments.

A report suggests 84 per cent of human M.marinum infections can be linked back to a fish tank, with most occurring due to a fish bite or an open wound coming into contact with contaminated water.

The rash usually occurs on the upper body but it can spread elsewhere via the lymphatic system in between 25 and 50 per cent of cases.

M.marinum is often misdiagnosed as syphilis or TB.

But the bacteria can be easily identified in the laboratory due to it producing a yellow pigment when exposed to light.

The authors of the case report are urging doctors to consider M.marinum if a patient has an unexplained rash, particularly if they mention having a fish tank.

The bacteria has no standard treatment, however, surgery may be required if a patient’s deep tissue becomes infected.

M.marinum’s symptoms are usually just small red bumps that do not heal.

However, people with a suppressed immune system may develop a fever, enlarged lymph nodes or blood infections.

The man in this case had Crohn’s disease and had taken the immune system suppressing-drug prednisone every day for 40 years.

It is unclear whether this caused him to have a more serious reaction to the infection.