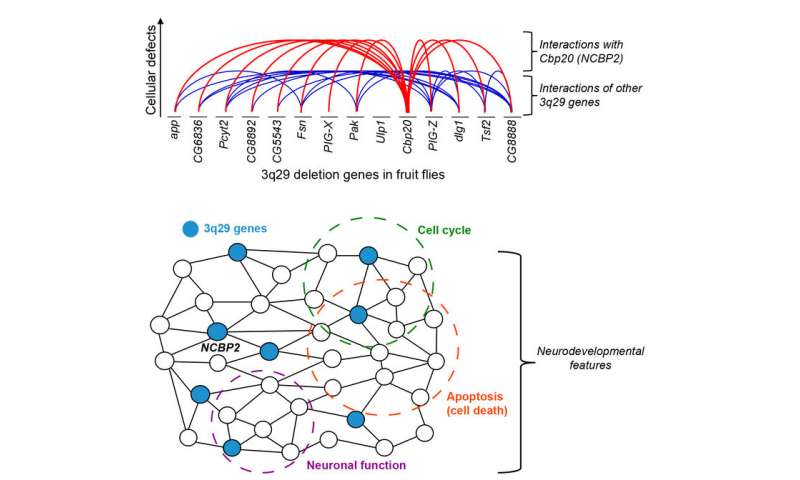 Neurodevelopmental disorders, including schizophrenia and autism, likely result from complex interactions that modify the effects of individual genes. In a new study, researchers evaluated the effects of over 300 pairwise knockdowns—reducing the expression of two genes simultaneously—of the fruit fly versions of genes located in a region of human chromosome 3 that, when deleted, has been implicated in these disorders. These interactions suggest that the disorders have a complex causation involving many genes, rather than resulting from the effects of any individual gene. One gene in particular, NCBP2, appears to be a key modifier, influencing the impact of other genes in the deletion.

A paper describing the research by scientists at Penn State, Boston University, and the University of Florida, appears online Feb. 13 in the journal PLOS Genetics.

“Neurodevelopmental disorders, like schizophrenia and autism, are often associated with large genetic deletions or duplications,” said Santhosh Girirajan, associate professor of genomics in the biochemistry and molecular biology and anthropology departments at Penn State and the leader of the research team. “These ‘copy-number variants’ can contain many genes, so piecing together the molecular mechanisms that lead to these disorders is incredibly difficult. The deletion on human chromosome 3, referred to as 3q29, encompasses 1.6 million base pairs and includes 21 genes. Testing the interactions among these genes in a mammalian model would be cost- and time-prohibitive, so we use the fruit fly, which allows us to test a large number of genetic interactions relatively quickly.”

Of the 21 genes located in the 3q29 deletion, fruit fly counterparts have been identified for 14 genes. Using a technique called RNA interference (RNAi), which reduces the expression of genes in specific tissues in the fly, the researchers first knocked down the expression of 14 fly genes individually and quantified their impact on how cells are organized in the fly eye. They then looked at pairwise knockdowns by reducing the expression of two genes simultaneously. Overall, they tested 314 pairwise knockdowns, including interactions among all 14 of the genes in the 3q29 deletion and between those genes and others with known roles in neurodevelopment.

“When we look at pairwise knockdowns, there are basically three possible outcomes,” said Matthew Jensen, a graduate student at Penn State and co-first author of the paper. “The effect could be additive, meaning the impact we see in the pairwise knockdown is simply what we would see by adding the effects of the two individual genes together. This would suggest that the genes act independently of one another. Alternatively, we could see a rescue of the impact of the individual gene, or we could see the impact get worse. These last two outcomes represent an interaction between the genes, where the whole is greater than the sum of its parts, and suggest a more complex relationship between the genes.”

Among all the pairwise knockdowns that the research team tested, one particular gene stood out as having a large effect on the impact of all the other genes in the 3q29 deletion. The NCBP2 gene codes for a protein that is part of the “nuclear cap-binding complex,” which binds to the end of RNA molecules and plays a role in RNA regulation, transport, and decay in the cell. The main impact of NCBP2 interactions was the disruption of the cell cycle and increased “apoptosis”—cell death. The researchers propose that NCBP2 could modify several cellular processes, not necessarily directly related to apoptosis, but ultimately causing a cascade of events that lead to cell death. Thus, the researchers suggest that apoptosis is an important molecular mechanism for neurodevelopmental disorders related to the 3q29 deletion.

The research team confirmed the role of apoptosis by crossing their knockdown flies with flies that overexpress a gene that inhibits apoptosis. Doing so rescued or reduced the effect of the knockdowns. They also tested the role of several of the genes and interactions in a separate model system—the frog—and found similar results.