Lack of sleep can cause a sweet tooth: Scientists discover insomnia can make you crave sugar

We all know not getting enough sleep affects our energy and mood, but research suggests insomnia even causes us to crave sugar.

A study of 51 men by Michigan State University implies getting less shut eye than we are used to makes us pine after the sweet stuff.

Sleep is hugely complex and poorly understood, making it difficult for scientists to uncover how a bad slumber affects our taste buds.

Failure to nod off may activate a region of the brain that gets ‘turned on’ when we consume sweet food, the researchers claim.

Insomnia may also make us ‘stress eat’ due to the release of the hormone cortisol. 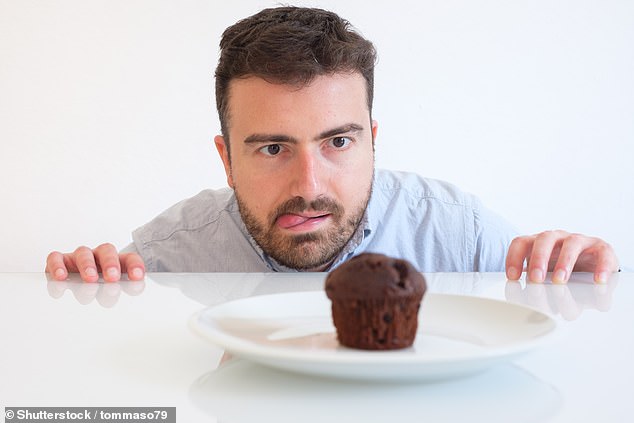 The research was led by Dr Robin Tucker from the department of food science and human nutrition.

Health officials around the world recommend adults get between seven and nine hours of shut eye a night.

To determine how our slumber affects our sugar cravings, the researchers analysed healthy men who claimed to sleep well.

The men wore electrodes on their scalps while they slept during their normal nighttime routine over two consecutive nights.

These electrodes measured the electrical activity of the men’s brains to determine how much shut eye they got, as well as the length of time they spent in deep or light sleep.

The following two days, the participants went to the laboratory where they tasted between 14 and 18 sugary solutions, which they then rated in order of preference.

Results – published in the journal Food Quality and Preference – revealed the less sleep the men got, the more they craved sugar.

And less time in the rapid eye movement (REM) of sleep – when the brain is most active and dreams typically occur – was also linked to desiring the sweet stuff.

Past research suggests lack of sleep may be responsible for a 15 per cent increase in preference towards sweet foods in women.

However, when the scientists compared the results of their male study to this research, they found no difference in sweet cravings between the sexes.

Insomnia has been shown to affect the activity of the region of the brain known as the amygdala, which processes emotions and acts as our ‘reward centre’.

Poor sleep is also linked to the release of the stress-hormone cortisol, which is associated with eating more, particularly in women.

REM has also been shown to play a role in the development of food preferences and activates the same area of the brain that gets ‘turned on’ when we over indulge in tasty food.

The researchers believe future studies should try to get to the bottom of the link between sleep and sugar cravings.

HOW TO COPE WITH SLEEP PROBLEMS

Poor sleep can lead to worrying and worrying can lead to poor sleep, according to the mental-health charity Mind.

A lack of shut eye is considered a problem when it impacts on a person’s daily life.

As a result, they may feel anxious if they believe lack of sleep prevents them from rationalising their thoughts.

Insomnia is also associated with depression, psychosis and PTSD.

Establishing a sleep routine where you go to bed and get up at the same time every day can help a person spend less time in bed and more time asleep.

Having tech-free time an hour or so before bed can also prepare you for sleep.

If you still struggle to nod off, keeping a sleep diary where you record the hours you spend asleep and the quality of your shut eye on a scale of one to five can be a good thing to show your doctor.

Also note how many times you wake in the night, if you need to nap, if you have nightmares, your diet and your general mood.

Talking therapies can help your recongise unhelpful thought patterns that might affect sleep.

While medication, such as sleeping pills, can help break short periods of insomnia and help you return to better a sleeping pattern.