In the year 2019, nothing puts one at risk of an audible "tut tut" quite like the public presentation of a single-use product.

Whether it's the rustle of a thin plastic bag on the street ("Do they buy their asparagus at some sort of back alley supermarket?"), to the guilty possession of a disposable coffee cup ("Why haven't they brought a keep cup? Or fashioned a mug out of their bare hands?"), there is a uniquely modern tinge of shame – call it Reucassel Regret – that now comes with failing to make a sustainable choice. 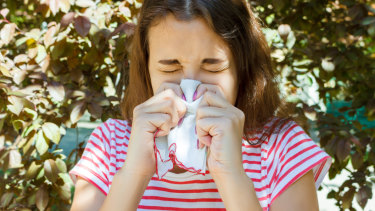 As we look towards a more sustainable way of living, perhaps it is time to reconsider the hanky.Credit:Shutterstock

Jokes aside, moving towards reusable items is, of course, good for the planet. So, one can hardly begrudge the early flickers of a trend that is sure to make your gran quite happy: the resurgence of the handkerchief.

As cold and flu season hits, more people seem to be carrying hankies. Before you ask: No, I have no data to back this up. I haven't been papping snotty-nosed strangers in cafes, or polling people in doctors' waiting rooms. But, I am just saying that it seems like hankies are happening. They are around. People are using them.

And, those people are onto something. Used tissues are not recyclable, and facial tissues made out of recycled materials are pretty rare because it can be difficult to make them soft enough (unlike toilet paper and paper towel, of which there are recycled varieties a plenty). It has been estimated that Australians use 273,000 tonnes of tissue product (including toilet paper) each year.

Hanky use is a natural progression from other 'cool' sustainability movements which require a committed laundry schedule.

While there are some more sustainable options out there – cheeky toilet paper subscription service Who Gives a Crap sells "forest-friendly" tissues made from bamboo, and (if you were feeling particularly diligent) you could also compost your old snotty nose napkins – the reality is that most tissues end up in landfill, where they will take an extremely long time to biodegrade because of the additives used to make them stronger. Hence, hankies.

Hanky use is a natural progression from other "cool" sustainability movements which require a committed laundry schedule. The cool parents use cloth nappies (which are, really, just baby-bum hankies), and the cool people who menstruate are wearing period undies.

But will this cool behaviour actually just leave you with a cold? With nine million cases of the cold and flu in Australia each year, you have to wonder if hankies are as hygienic as tissues.

Dr Kirsty Short, influenza virologist at the University of Queensland, says she is not aware of any research directly comparing the germiness of tissues and handkerchiefs, but warns the influenza virus can survive on both for 12 hours.

"Probably the most important thing is washing your hands after using a tissue or hanky to ensure you don't spread the virus to other surfaces," she says, adding that, once transferred onto a plastic surface, for example, the virus can survive for up to 48 hours.

Dr Harry Nespolon, president of the Royal Australian College of General Practitioners, says he has not personally noticed any uptake in handkerchief use among his patients. He would generally recommend people with a cold or flu use tissues.

"There's no doubt tissues are the preferred way to go because you do dispose of them after you use them," he says. "But there's a question about disposing of them properly; just leaving them on a table or desk is not the right way to dispose of them, putting them in the bin is the right thing to do."

However, Dr Nespolon says the main issue for the spread of bugs is what happens after you blow your nose, adding there is no reason why rubbing a used hanky rather than a fresh tissue on the nose would prolong an infection.

To reduce the chance of giving your cold to someone else, Dr Nespolon recommends measures such as washing your hands after you've blown your nose (ideally with disinfectant), covering your mouth when you cough, staying away from work when you're sick, and not keeping used tissues or hankies in a pocket with other items, like your mobile phone.