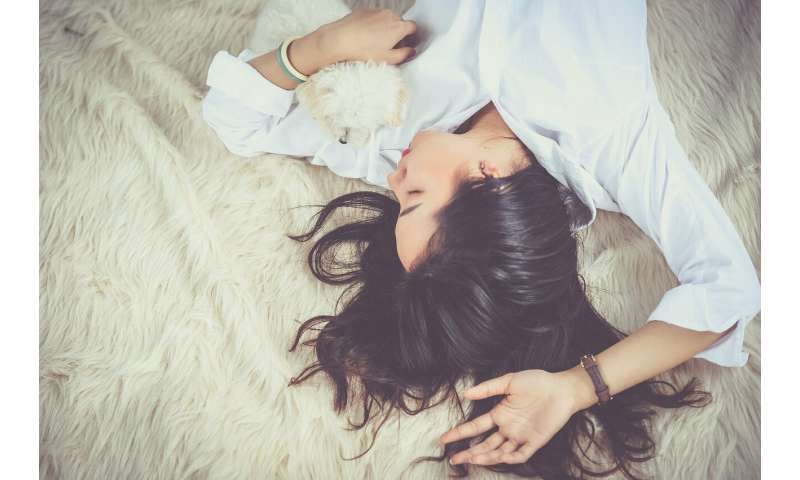 Young women are more likely to experience sleep disruption in the days leading up to their menstrual period, according to a new study that will be presented Saturday at ENDO 2019, the annual meeting of the Endocrine Society, in New Orleans, La.

“Sleep is more disrupted in the several days directly prior to menses in young healthy women,” said Anne E. Kim, a medical student at the Cleveland Clinic Lerner College of Medicine of Case Western Reserve University in Cleveland, Ohio. “Increased sleep disruption was found in the late luteal phase, which corresponds with the days directly prior to menses.” Menstrual phase affected sleep efficiency, wake after sleep onset (WASO), number of awakenings per night, and sleep fragmentation index, in keeping with increased sleep disruption in the late luteal phase. Compared with the early follicular phase, sleep efficiency decreased by 3.3 percent, WASO increased by 15 minutes, and number of awakenings per night increased by three in the late luteal phase.

Kim and her colleagues collected daily sleep data from 10 healthy women between the ages of 18 and 28 who had regular menstrual cycles. The researchers tracked the women’s sleep during two of their cycles. The women wore actigraphic sensors on their wrist to record patterns of activity and rest over 578 sleep episodes and they provided morning urine samples for measurement of concentrations of luteinizing hormone (LH), estrone-3-glucuronide (E1G), and pregnanediol-3-glucuronide (PDG). All participants ovulated in both cycles.

The women also completed five-day diets during the early follicular phases of each cycle. The diet during one cycle contained neutral energy availability, and the diet during the other cycle contained 55 percent fewer calories. Menstrual cycle lengths were standardized to 14-day follicular and 14-day luteal phases, centered on the day of ovulation.

“Short-term caloric restriction had negative effects on sleep in both the late follicular phase, just before ovulation, and in the late luteal phase, just before the onset of menses,” said Kim, who performed this study at the National Institute of Environmental Health Sciences (NIEHS). Decreased energy availability increased sleep disruption, with less sleep efficiency, greater WASO, and higher sleep fragmentation index in the late follicular phase in addition to the effects noted above in the late luteal phase.

It is likely these effects are mediated by the dynamic changes in ovarian hormones across the menstrual cycle. Their study found that E1G was linked with more awakenings, and PDG was linked with a trend toward higher sleep fragmentation index.

According to the National Sleep Foundation, 25 percent to 33 percent of menstruating women in the United States have reported more disrupted sleep during the weeks before and/or during menses. This study by Kim and colleagues validates these perceptions using objective measures, and further documents the negative impact of dieting on sleep.