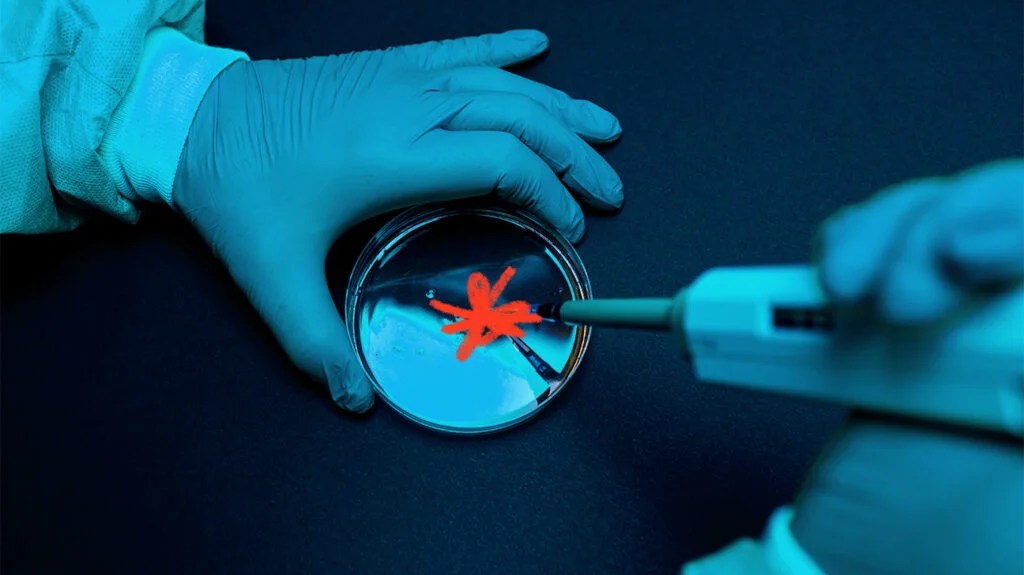 Genetically engineering viruses to create an injection that can treat cancer is the aim currently being pursued by a number of different laboratories around the world.

Referred to as oncolytic viruses, these viruses replicate in cancer cells, rather than healthy cells and then kill them by making them burst. When the cells burst, they release tumor antigens and proteins which the body recognizes as foreign, which then triggers the immune system to attack the tumor cells.

Not only does this kill the cancer cells, but it can also help to reduce cancer recurrence as the immune system now recognizes these antigens and protein biomarkers and knows to attack cells containing them.

Oncolytic viruses have both natural cancer-killing properties, and additional properties from being genetically engineered to include genes that have an immune effect. Viruses that have been used as oncolytic viruses include the herpes simplex virus, adenovirus, pox viruses, and Coxsackievirus, with genetic modification used to introduce transgenes to enhance their ability to kill cancer cells.

The first oncolytic virus therapy, T-VEC, which is based on the herpes simplex virus, was approved by the FDA in 2015 after a phase III trial showed it was effective against melanoma.

Scientists are also exploring further oncolytic viruses such as Vaxinia, a genetically modified smallpox vaccine virus, designed to be used with any cancer, which entered Phase 1 of a clinical trial following promising results in animal models in June 2022.

Most recently, results from the first part of a phase 1 trial of an injection based on a genetically modified herpes virus, known as RP2, were announced at the 2022 European Society for Medical Oncology Congress (ESMO) by researchers from the Institute of Cancer Research, London, and the Royal Marsden NHS Foundation Trust.

The testing had been funded by the company which produces RP2.

Dr. Grant McFadden, director of the Biodesign Center for Immunotherapy, Vaccines, and Virotherapy at Arizona State University, who is currently working on a cancer treatment using the myxoma virus, explained to Medical News Today that the information provided by this testing in humans was useful, as it was difficult to obtain information about the effect of the body’s immune response from animal models.

“There are really two phases with the oncolytic virotherapy. The first phase is the virus infecting and killing cancer cells. But that’s just the first phase. If that’s the only thing that happens, you can never kill the cancer cells and they’ll always come back,” he said.

“The second phase is the immune system responding to the virus infection of the tumor cells. And the goal is to have the immune system see not only the virus, but also what we call tumor antigens that have been exposed by the virus replication in the tumor cell. But when both things happen, the potential for long-term regression of the cancer exists even after the virus has been cleared by the immune response. So it’s that that second immune phase is highly critical to long-term tumor aggression,” he further explained.

“And that phase is unique to people in human immune system systems. That’s why we’re dependent upon human clinical data to evaluate how well the virus is actually going to work for the long-term,” he added.

In this early-stage study, scientists monitored the effects of an injection injected directly into the tumor in 39 patients.

Alongside destroying cancer cells, the virus used in the treatment has had genes inserted to make it produce molecules called GM-CSF (similar to T-Vec), in addition to GALV-GP-R, which have been shown to have anti-tumor properties and anti-CTLA-4 antibody-like molecule, which helps to take the “brakes off” the immune system.

The results showed that of the nine patients who received the viral injection on its own, one experienced their tumor disappear completely and remained cancer free 15 months later. Two other patients with oesophageal cancer and uveal melanoma experienced their tumors shrink. Eighteen and 15 months later, respectively, their cancers had not progressed.

A further 30 patients were given the injection alongside the cancer immunotherapy drug nivolumab, which works by activating immune cells which attack cancer cells.

Of these patients, seven saw their cancer’s growth halt or shrink, and six of these patients experienced no cancer progression 14 months after treatment.

All patients involved in the trial had very advanced cancers which had already failed to respond to other treatments or they were not eligible for existing treatments. Biopsies showed more immune cells around the tumors and increased expression of genes that could help kill cancer cells.

The team hopes to identify the patients it should test the therapy on in phase II trials, said study leader Professor Kevin Harrington, professor of biological cancer therapies at The Institute of Cancer Research, London, and consultant oncologist at The Royal Marsden NHS Foundation Trust.

Prof. Harrington told Medical News Today in an interview that the herpes virus really offered the “full package” as a candidate for genetic modification to create such treatments.

“There’s no question that, to my mind, the virus strain that has the strongest credentials for use in epithelial tumors, is the herpes virus platform. The virus infects epithelial tissues extremely effectively, it is easily genetically manipulable. It has a relatively large capacity for carrying genes that you want to put into the virus, so is a good vector vehicle for those genes,” he said.

He explained that there were also approved drugs available that could treat a herpes infection if the virus ended up replicating in places it shouldn’t, though that had not happened in testing.

“Many of the other viral platforms are either limited in the scope of cells that they infect, have relatively small gene packaging capacities, are indeed are not genetically manipulable at all, with simple means,” he added.

Dr. McFaddent said a limitation of using herpes viruses as the basis for these treatments was that they have to be injected directly into the tumor, whereas it was hoped that treatments based on pox viruses could be provided intravenously.

“No one really knows at this point, what is the ideal platform for either intratumoral injection or intravenous injection? So that this will only be determined by future clinical trials. And as I said, the current data is a step in the right direction,” he added.