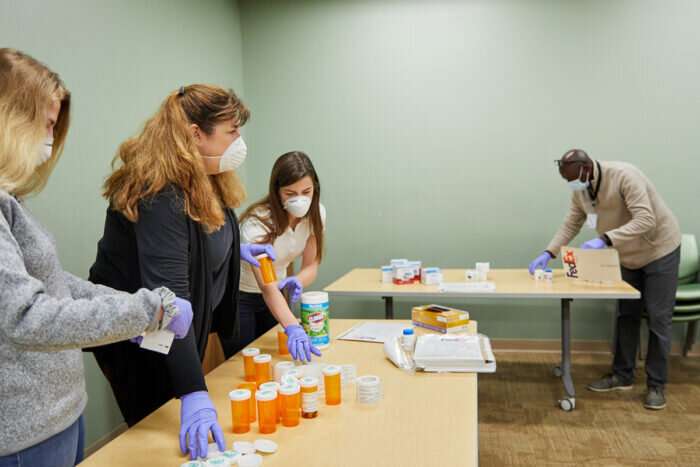 In a preliminary study of COVID-19 patients with mild-to-moderate disease who were attempting to recover in their homes, researchers at Washington University School of Medicine in St. Louis have found that the drug fluvoxamine seems to prevent some of the most serious complications of the illness and make hospitalization and the need for supplemental oxygen less likely.

The study, a collaboration between the university’s Department of Psychiatry and Division of Infectious Diseases, involved 152 patients infected with SARS-CoV-2, the virus that causes COVID-19. Researchers compared the outcomes of those treated with fluvoxamine to the outcomes of those given an inactive placebo. After 15 days, none of the 80 patients who had received the drug experienced serious clinical deterioration. Meanwhile, six of the 72 patients given placebo (8.3%) became seriously ill, with four requiring hospitalization.

The study is published online Nov. 12 in the Journal of the American Medical Association.

“The patients who took fluvoxamine did not develop serious breathing difficulties or require hospitalization for problems with lung function,” said the paper’s first author, Eric J. Lenze, MD, the Wallace and Lucille Renard Professor of Psychiatry. “Most investigational treatments for COVID-19 have been aimed at the very sickest patients, but it’s also important to find therapies that prevent patients from getting sick enough to require supplemental oxygen or to have to go to the hospital. Our study suggests fluvoxamine may help fill that niche.”

Fluvoxamine is used commonly to treat obsessive-compulsive disorder (OCD), social anxiety disorder and depression. It is in a class of drugs known as selective serotonin-reuptake inhibitors (SSRIs), but unlike other SSRIs, fluvoxamine interacts strongly with a protein called the sigma-1 receptor. That receptor also helps regulate the body’s inflammatory response.

“There are several ways this drug might work to help COVID-19 patients, but we think it most likely may be interacting with the sigma-1 receptor to reduce the production of inflammatory molecules,” said senior author Angela M Reiersen, MD, an associate professor of psychiatry. “Past research has demonstrated that fluvoxamine can reduce inflammation in animal models of sepsis, and it may be doing something similar in our patients.”

Reiersen said the drug’s effects on inflammation could prevent the immune system from mounting an overwhelming response, which is thought to occur in some COVID-19 patients who seem to improve after a few days of illness and then worsen. Many of those patients end up hospitalized, and some die.

In an innovative twist to research during the pandemic, the study was conducted remotely. When a symptomatic patient tested positive and enrolled in the study, research staff delivered the medication or inactive placebo to them, along with thermometers, automatic blood pressure monitors and fingertip oxygen sensors.

“Our goal is to help patients who are initially well enough to be at home and to prevent them from getting sick enough to be hospitalized,” said Caline Mattar, MD, an assistant professor of medicine in the Division of Infectious Diseases. “What we’ve seen so far suggests that fluvoxamine may be an important tool in achieving that goal.”

For two weeks, subjects took either the antidepressant drug or placebo sugar pills while having daily interactions with members of the research team—via phone or computer. That allowed patients to report on their symptoms, oxygen levels and other vital signs. If patients suffered shortness of breath or were hospitalized for pneumonia, or their oxygen saturation levels fell below 92%, their conditions were considered to have deteriorated.

“The good news is that not a single person taking the active medication experienced deterioration,” Reiersen said. “We believe this drug may be the reason, but we need to study more patients to make sure.”

The researchers will begin a larger study in the next few weeks. Lenze, the director of the Healthy Mind Lab at the School of Medicine, is an expert in using mobile and internet technology to conduct clinical trials. He said that although this initial study involved patients in the St. Louis region, the next phase of the research will involve patients from throughout the country.