During a medical malpractice trial in New Jersey, jurors waited nearly 4 hours for the physician defendant to show up. When he did arrive, the body-building surgeon was sporting two thick gold chains, a diamond pinky ring, and had the top buttons of his shirt open enough to reveal his chest hair.

“This trial was in a very rural, farming community,” recalls medical liability defense attorney Catherine Flynn of Flynn Watts LLC, based in Parsippany, New Jersey. “Many of the jurors were wearing flannel shirts and jeans. The doctor’s wife walked in wearing a 5-carat diamond ring and other jewelry.”

Flynn took the couple aside and asked them to remove the jewelry. She explained that the opulent accessories could damage the jury’s view of the physician. The surgeon and his wife however, refused to remove their jewelry, she said. They didn’t think it was a big deal. 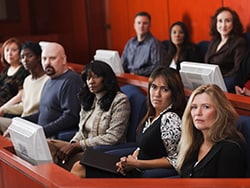 The case against the surgeon involved intraoperative damage to a patient when the physician inadvertently removed a portion of nerve in the area of the procedure. After repair of the nerve, the patient had a positive result. However, the patient alleged the surgeon’s negligence resulted in permanent damage despite the successful repair.

“In certain counties in New Jersey, his attire would not have been a problem,” she said. “In this rural, farming county, it was a huge problem. You have to know your audience. There are a lot of other things that come into play in a medical malpractice case, but when it comes to damages in a case, you don’t want to be sending the message that support what somebody’s bias may already be telling them about a doctor.”

The surgeon appealed the verdict, and the case ultimately settled for a lesser amount, according to Flynn.

An over-the-top wardrobe is just one way that physicians can negatively influence jurors during legal trials. From subtle facial expressions to sudden outbursts to downright rudeness, attorneys have witnessed countless examples of physicians sabotaging their own trials. Legal experts say the cringe-worthy experiences are good reminders that jurors are often judging more than just evidence.

“The minute you enter the courthouse, jurors or potential jurors are sizing you up,” says health law attorney Michael Clark of Womble Bond Dickinson (US) LLP based in Houston. “The same phenomenon occurs in a deposition. Awareness of how you are being assessed at all times, and the image that is needed, is important since a negative impression by jurors can have a detrimental effect on a physician’s case.”

In another case, attorneys warned a physician defendant against dressing in his signature wardrobe during his trial. Against their advice, the doctor showed up daily to his trial in bright pastel, monochromatic suits with matching Gucci-brand shoes, said medical liability defense attorney Meredith C. Lander, of Kaufman Borgeest & Ryan LLP, based in Connecticut. On the witness stand, the doctor was long-winded and wasn’t “terribly likeable,” Lander said.

However, the evidence weighed in the physician’s favor, and there was strong testimony by defense experts. The physician won the case, Lander said, but after the verdict, the jury foreperson approached the trial attorney and made some disparaging remarks about the defendant.

“The foreperson said the jury didn’t like the doctor or his ‘Gucci suits and shoes,’ but they believed the experts,” Lander said.

Disruptive behavior can also harm jurors’ perception of physicians, Flynn adds. During one instance, a surgeon insisted on sitting next to Flynn, although she generally requests clients sit in the first row so that jurors are not so focused on their reactions during testimony. The surgeon loudly peppered Flynn with questions as witnesses testified, prompting a reprimand from the judge.

“The judge admonished the doctor several times and said, ‘Doctor, you’re raising your voice. You’ll get a chance to speak with your attorney during the break,’ ” Flynn recalled. “The doctor refused to stop talking, and the judge told him in front of the jury to go sit in the back of the courtroom. His reaction was, ‘Why do I have to move?! I need to sit here!”

The surgeon eventually moved to the back of the courtroom and a sheriff’s deputy stood next to him. Testimony continued until a note in the form of a paper airplane landed on the table in front of Flynn. She carefully crumpled the note and tossed it in the wastebasket. Luckily, this drew a laugh from jurors, she said.

But things got worse when the surgeon testified. Rather than answer the questions, he interrupted and started telling jurors his own version of events.

“The judge finally said, ‘Doctor, if you don’t listen to your attorney and answer her questions, I’m going to make you get off the stand,’ Flynn said. “That was the most unbelievable, egregious self-sabotage trial moment I’ve ever experienced.”

Fortunately, the physician’s legal case was strong, and the experts who testified drove the defense’s side home, Flynn said. The surgeon won the case.

Attorney: Watch What You Say in the Elevator

Other, more subtle behaviors — while often unintentional — can also be damaging.

Physicians often let their guard down while outside the courtroom and can unknowingly wind up next to a juror in an elevator or standing in a hallway, said Laura Postilion, a partner at Quintairos, Prieto, Wood & Boyer, P.A., based on Chicago.

“For instance, a doctor is in an elevator and feels that some witness on the stand was lying,” Postilion said. “They might be very upset about it and start ranting about a witness lying, not realizing there is a juror is in the elevator with you.”

Physicians should also be cautious when speaking on the phone to their family or friends during a trial break.

“At the Daley Center in downtown Chicago, there are these long corridors and long line of windows; a lot of people will stand there during breaks. A doctor may be talking to his or her spouse and saying, ‘Yeah, this juror is sleeping!’ Jurors are [often] looking for drama. They’re looking for somebody letting their guard down. Hearing a doctor speak badly about them would certainly give them a reason to dislike the physician.”

Postilion warns against talking about jurors in or outside of the courtroom. This includes parking structures, she said.

Physicians can take additional steps to save themselves from negative judgment from jurors, attorneys say. Even before the trial starts, Postilion advises clients to make their social media accounts private. Some curious jurors may look up a physician’s social media accounts to learn more about their personal life, political leanings, or social beliefs, which could prejudice them against the doctor, she said.

Once on the stand, the words and tone used are key. The last thing a physician defendant wants is to come across as arrogant or condescending to jurors, said medical liability defense attorney Michael Moroney of Flynn Watts LLC.

“For instance, a defendant might say, ‘Well, let me make this simple for you,’ as if they’re talking to a bunch of schoolchildren,” he said. “You don’t know who’s on the jury. That type of language can be offensive.”

Lander counsels her clients to refrain from using the common phrase, “honestly,” before answering questions on the stand.

“Everything you’re saying on the stand is presumed to be honest,” she said. “When you start an answer with, ‘Honestly…” out of habit, it really does undercut everything that follows and everything else that’s already been said. It suggests that you were not being honest in your other answers.”

Keep in mind that plaintiffs’ attorneys will try their best to rattle physicians on the stand and get them to appear unlikeable, says Clark, the Houston-based health law attorney. Physicians who lose their cool and begin arguing with attorneys play into their strategy.

“Plaintiffs attorneys have been trained in ways to get under their skin,” he said. “Righteous indignation and annoyance are best left for a rare occasion. Think about how you feel in a social setting when people are bickering in front of you. It’s uncomfortable at best. That’s how a jury feels too.”

Body language is also important, Clark notes. Physicians should avoid crossed arms, leaning back and rocking, or putting a hand on their mouth while testifying, he said. Many attorneys have practice sessions with their clients and record the interaction so that doctors can watch it back and see how they look.

“Know your strengths and weaknesses,” he said. “Get help from your lawyer and perhaps consultants about how to improve these skills. Practice and preparation are important.”

Postilion goes over courtroom clothing with physician clients before trial. Anything “too flashy, too high-end or too dumpy” should be avoided, she said. Getting accustomed to the courtroom and practicing in an empty courtroom is a good way to ensure that a physician’s voice is loud enough and projecting far enough in the courtroom, she adds.

“The doctor should try to be the best version of him or herself to jurors,” she said. “A jury can pick up someone who’s trying to be something they’re not. A good attorney can help the doctor find the best version of themselves and capitalize on it. What is it that you want the jury to know about your care of the patient? Take that overall feeling and make sure it’s clearly expressed to the jury.”